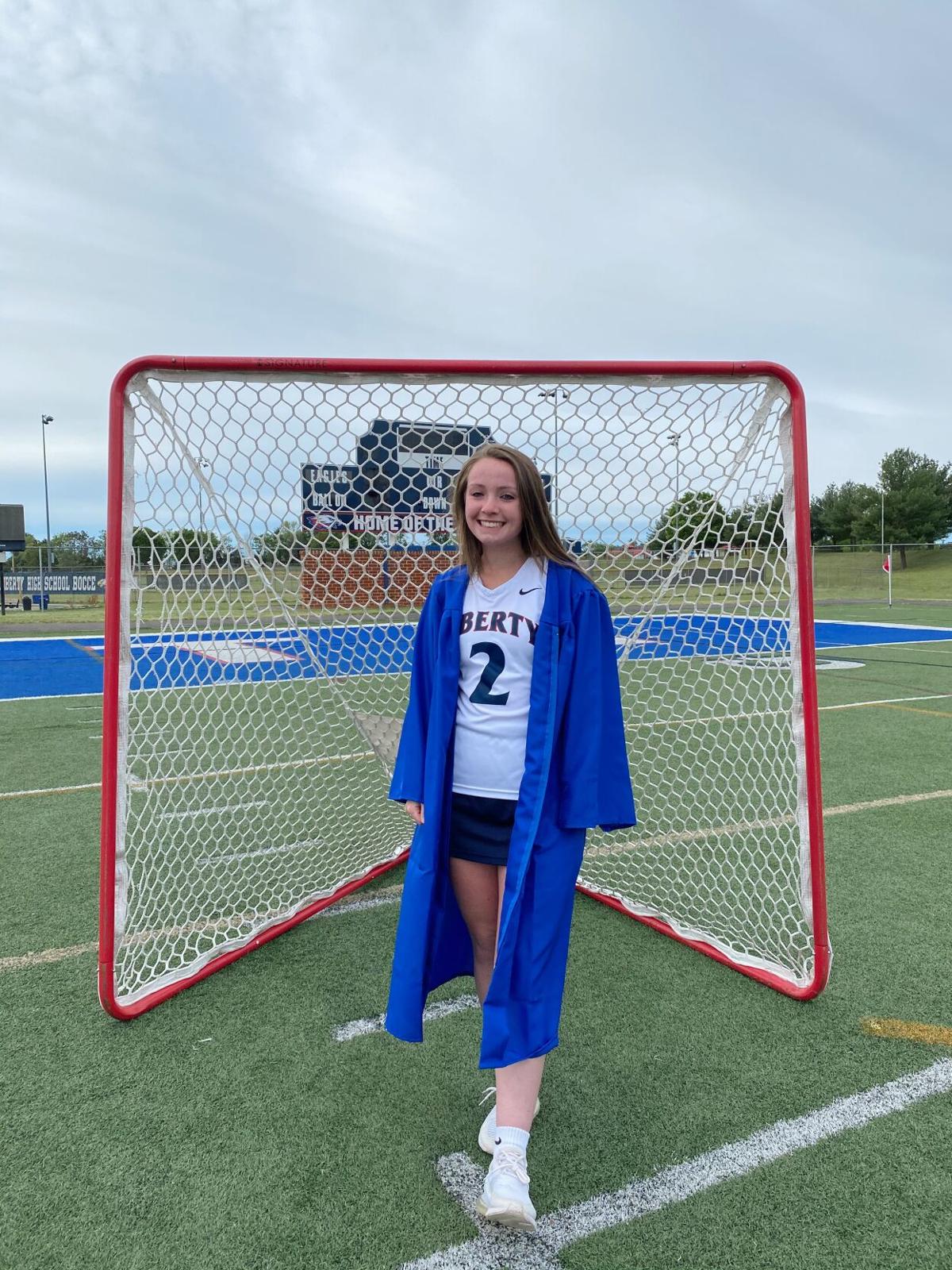 Gretchen Thomas was a standout lacrosse and field hockey player named  the 2021 Fauquier Times Girls Athlete of the Year. After initially planning to attend West Virginia University, she switched course and will play lacrosse and study nursing at Longwood University. "I tell you it's kind of a crazy story," Thomas said of switching to Longwood. 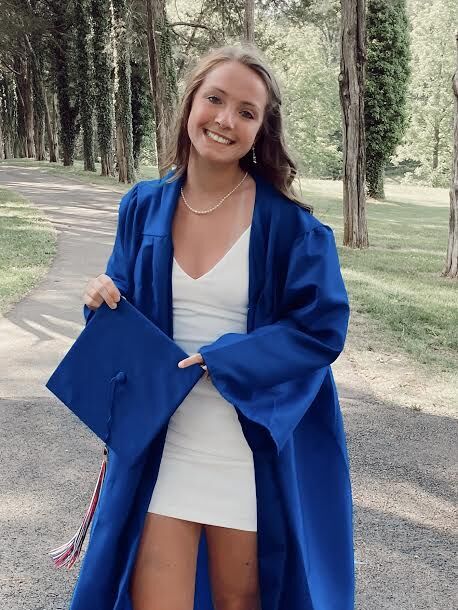 Gretchen Thomas was a standout lacrosse and field hockey player named  the 2021 Fauquier Times Girls Athlete of the Year. After initially planning to attend West Virginia University, she switched course and will play lacrosse and study nursing at Longwood University. "I tell you it's kind of a crazy story," Thomas said of switching to Longwood.

Gretchen Thomas is headed to Longwood University to study nursing and play Division I women's lacrosse.

She will arrive after productive careers in lacrosse and field hockey that led to her selection as 2021 Fauquier Times Liberty High Girls Athlete of the Year.

The 2021 graduate originally planned to attend West Virginia University to major in physical education, until a May 1 home lacrosse game against Fauquier altered her college path.

"I tell you it's kind of a crazy story," Thomas said.

One of the three game officials approached Thomas during the game, beginning a conversation lasting throughout the contest.

While placing the ball between the two sticks for a draw, the ref asked Thomas if she was going to play NCAA lacrosse. "I said 'No.' She said, 'Have you thought about it?" Thomas recalled, admitting. "I had always thought about it because it had always been my dream."

The conversation continued each time there was a draw, with the referee complimenting Thomas on her stick skills and insisting, "I think you should think about (college lacrosse)."

The referee said he knew Longwood coach Elaine Jones and advised her to email coach Jones. “Isn't it too late to try to get a spot on the team?” said Thomas. “I thought to myself, there's no way. But then I felt I probably need to go to Longwood if there's a chance.'"

Thomas contacted coach Jones and sent game tape from her sophomore season and from earlier in the spring. Longwood expressed interest, but NCAA regulations prevented any in person contact at that time. Once the dead period expired, Thomas met with the staff, toured the school and met many of the incoming lacrosse freshmen.

"It was crazy how it all worked out, but I think it was meant to be. I can't wait to go. I love it in Farmville," Thomas said, calling her future home "a cute little town."

She said she may play an attacking position with midfield also a possibility.

Thomas had an early indoctrination into sports. Her mother played soccer at Old Dominion University, and Thomas had been playing since she was 5. Her father was a high school lacrosse player, and she picked up that sport when the family moved from West Virginia to Vienna as a third grader.

Soccer and lacrosse clashed when Thomas entered Liberty as a freshman because both are spring sports. She had to make a decision which to continue.

"I kept lacrosse because I loved it more," she said, and she had an early impact on the Liberty program. As a freshman, Thomas registered 10 goals and 10 assists.

"She went straight to the varsity level and her skills allowed her to compete right away," Liberty coach Amy Lacey said of that season.

The Eagle exploded for 52 goals as a sophomore and assisted on 11 other scores while collecting 39 ground balls. The pandemic wiped out  2020 games, but her senior season was strong with 53 goals to give 115 for her career.

"She has always been a strong player but was never complacent. She always pushed herself to be better," Lacey said. “Gretchen studies the game.”

The squad voted Gretchen as a captain as a junior and senior, Lacey said of the high regard shown by teammates."She has always been aware of what her team needs her role to be," the coach praised. "She just knew what was needed, and did it."

With soccer no longer in the picture, Thomas chose to give field hockey a try in the fall of 2017, a decision that was fruitful for her and the program.

She became an integral part of the Eagle field hockey program as a wing in Liberty's potent attack after picking up the new sport quickly. The coaches elevated her from the junior varsity squad to the varsity midway through the season, and her contributions continually grew.

Thomas was one of the important cogs for the 2019 unit that smashed multiple school and county records en route to the Eagles' first state tournament berth since 2005. The team won 18 straight games in winning the Northwestern District crown, taking second in the region before falling in the Class 4 state quarterfinals.

Unlike lacrosse, Liberty field hockey coach Katie Norman said the Eagle's hockey numbers are not a true indication of Thomas' worth to the squad.

"Gretchen isn’t a stat kid when it comes to field hockey," Norman emphasized. "Her lax stats speak for her, but in field hockey she’s just truly the heart and soul of the team.

"Gretchen's not our [top] scorer, but she facilitates nearly every goal," Norman said appreciatively, citing the Eagle's "skillful, aggressive play."

Thomas was a mainstay on the right side of the Liberty alignment. Her speciality was jetting down the sideline to set up a teammate for a shot. Norman said the combination of speed, stick work and determination made Thomas almost unstoppable.

"My role on the team was being able to bring the ball up the field and getting it into the middle to our other forwards," Thomas explained, carrying the ball deep into the offensive end before striking crossing passes into the center of the circle to awaiting attackers.

She tallied two goals as a senior to give her 19 for her career and added eight assists. She earned first-team all-Northwestern District and all-region honors as a sophomore.

The league's coaches' association also voted her to the first team this spring en route to the team's most valuable player award.

"Without her, I don’t think we would have nearly as much success as we’ve had," Norman praised. "She proved herself in so many ways, especially in her senior season.

"Once she set her mind to something, she was going to work day in and out to achieve it. That kind of dedication was contagious to her teammates," Norman said.

Switching from WVU to Longwood means some changes in lifestyle, with 21,000-plus undergraduate students at WVU versus 4,300 at Longwood.

"I basically applied to two very different schools," Thomas stated. "Out-of-state and in-state, football team and no football team. I wanted to go to big football games, but I didn't want to pay out-of-state tuition,” she said. "Every day I was trying to decide between the two. I thought I had decided. I really liked WVU."

The change in colleges also resulted in a different professional path for Thomas. Instead of studying P.E. at West Virginia, she now will enter Longwood's nursing curriculum and focus on neonatal intensive care.