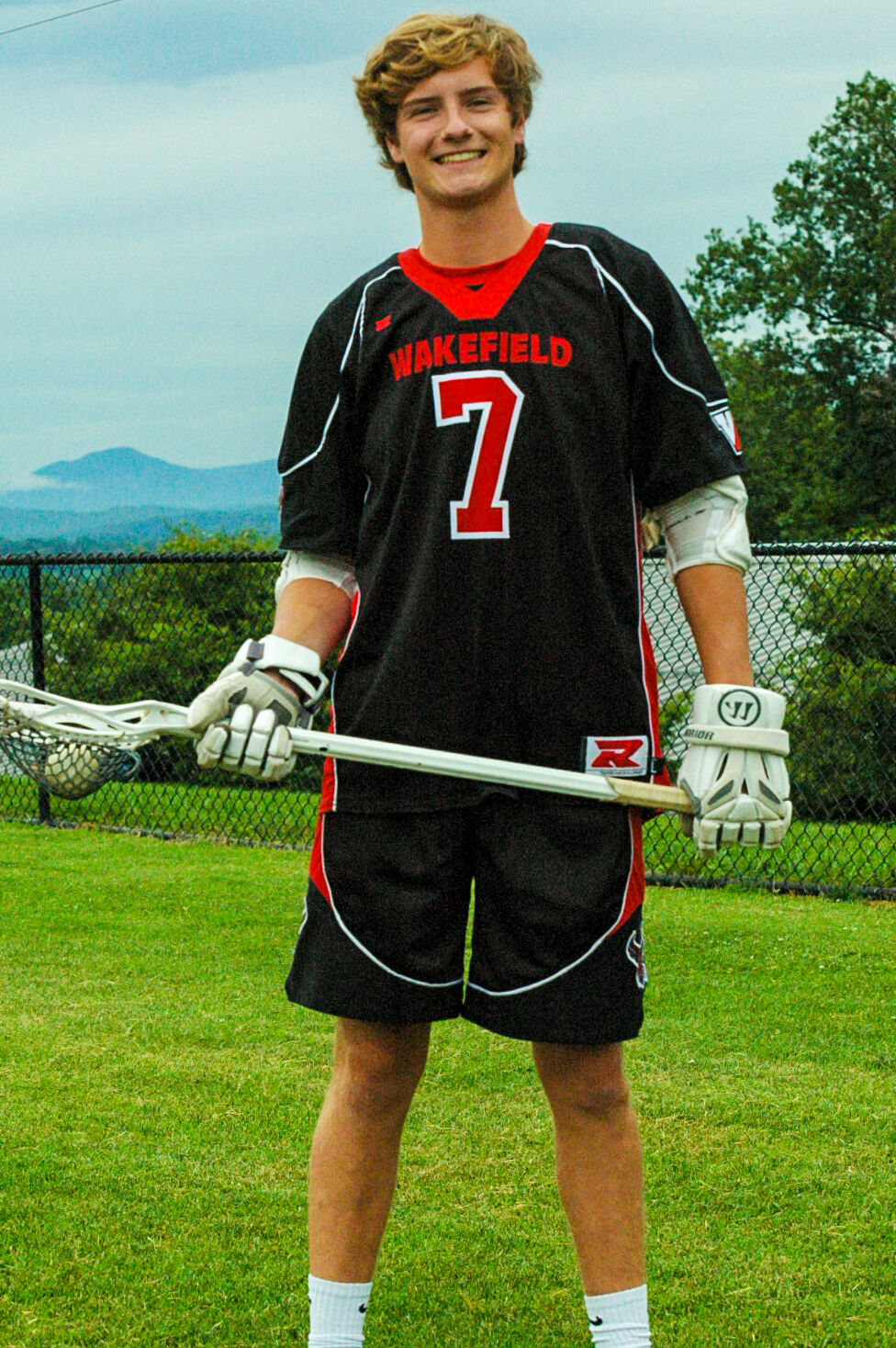 “I was always the kid who wouldn’t stop running,” says Graham Zontine. The 2021 Fauquier Times Wakefield School Boys Athlete of the Year excelled in lacrosse and soccer and threw his body around in basketball. He’ll attend James Madison University this fall. 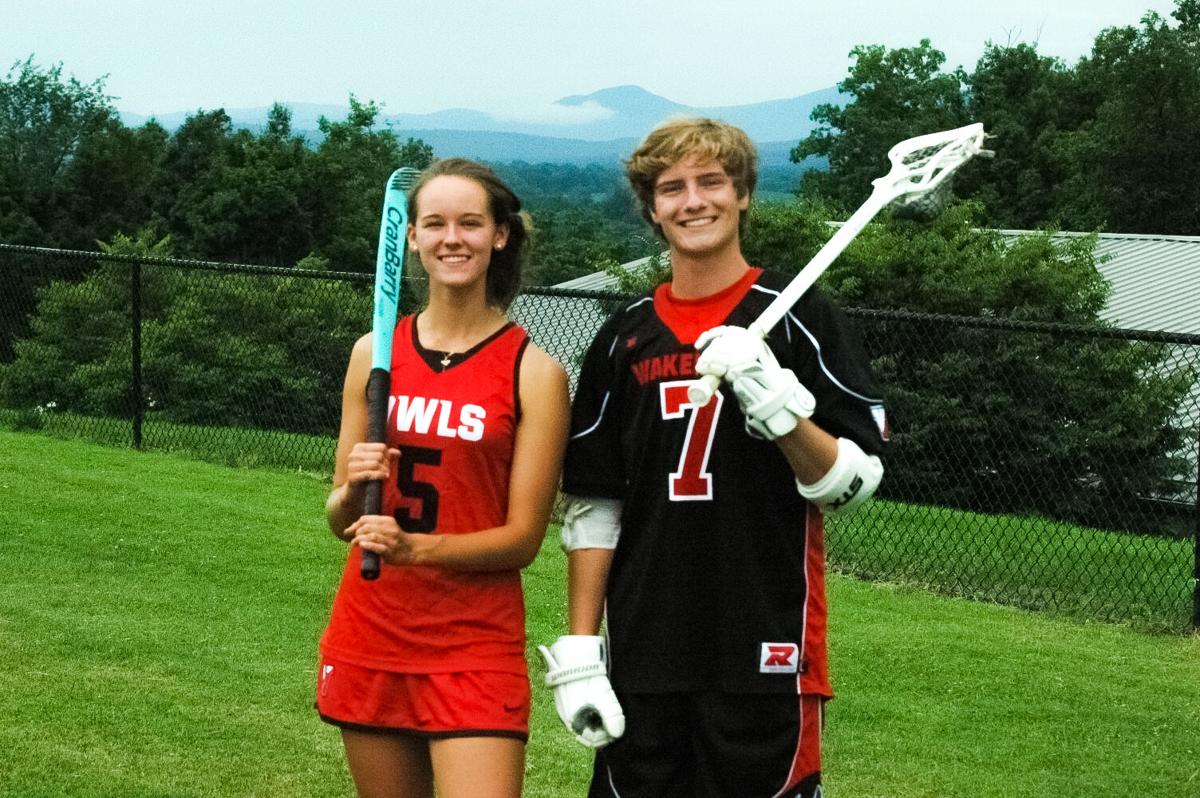 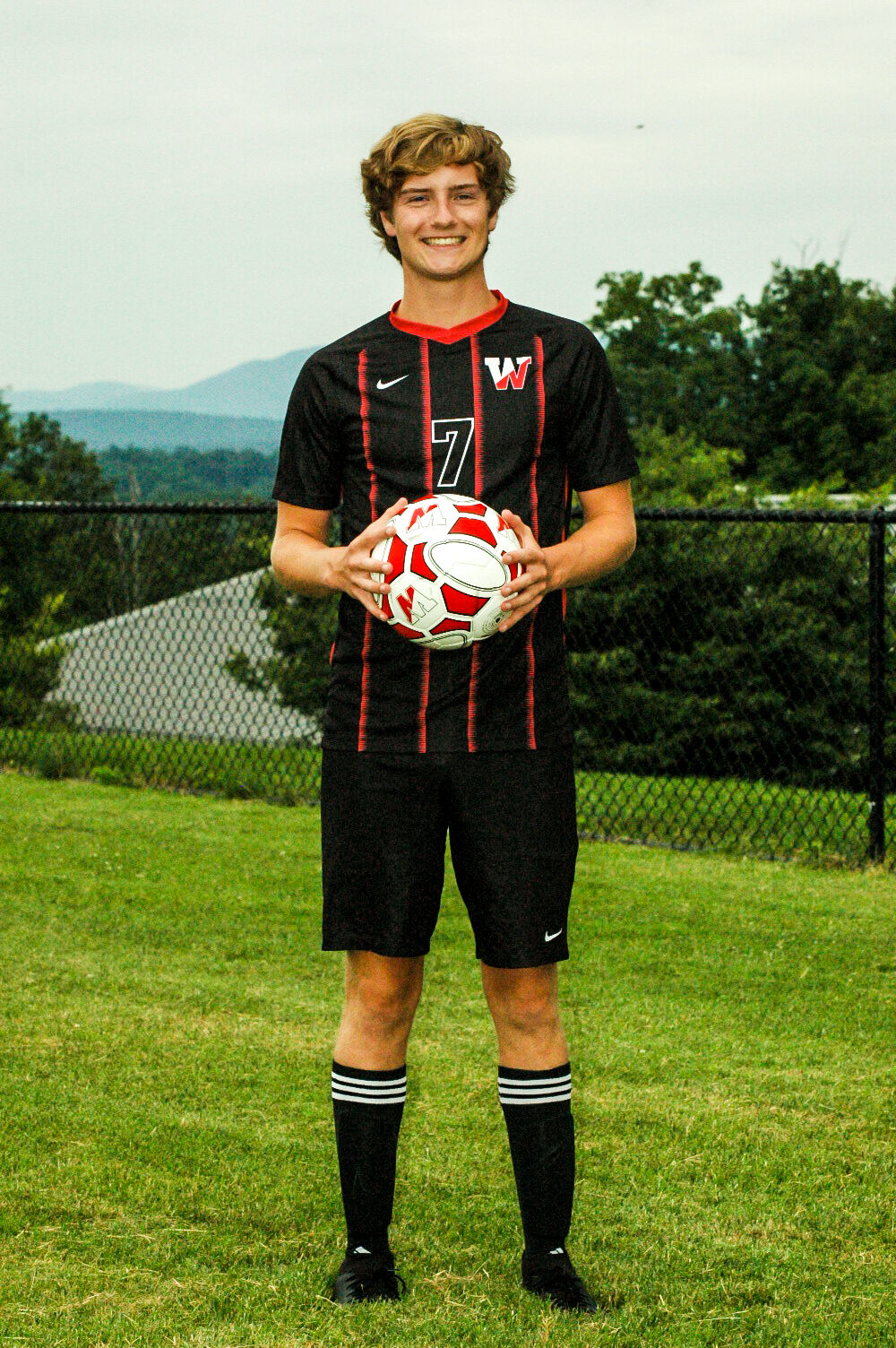 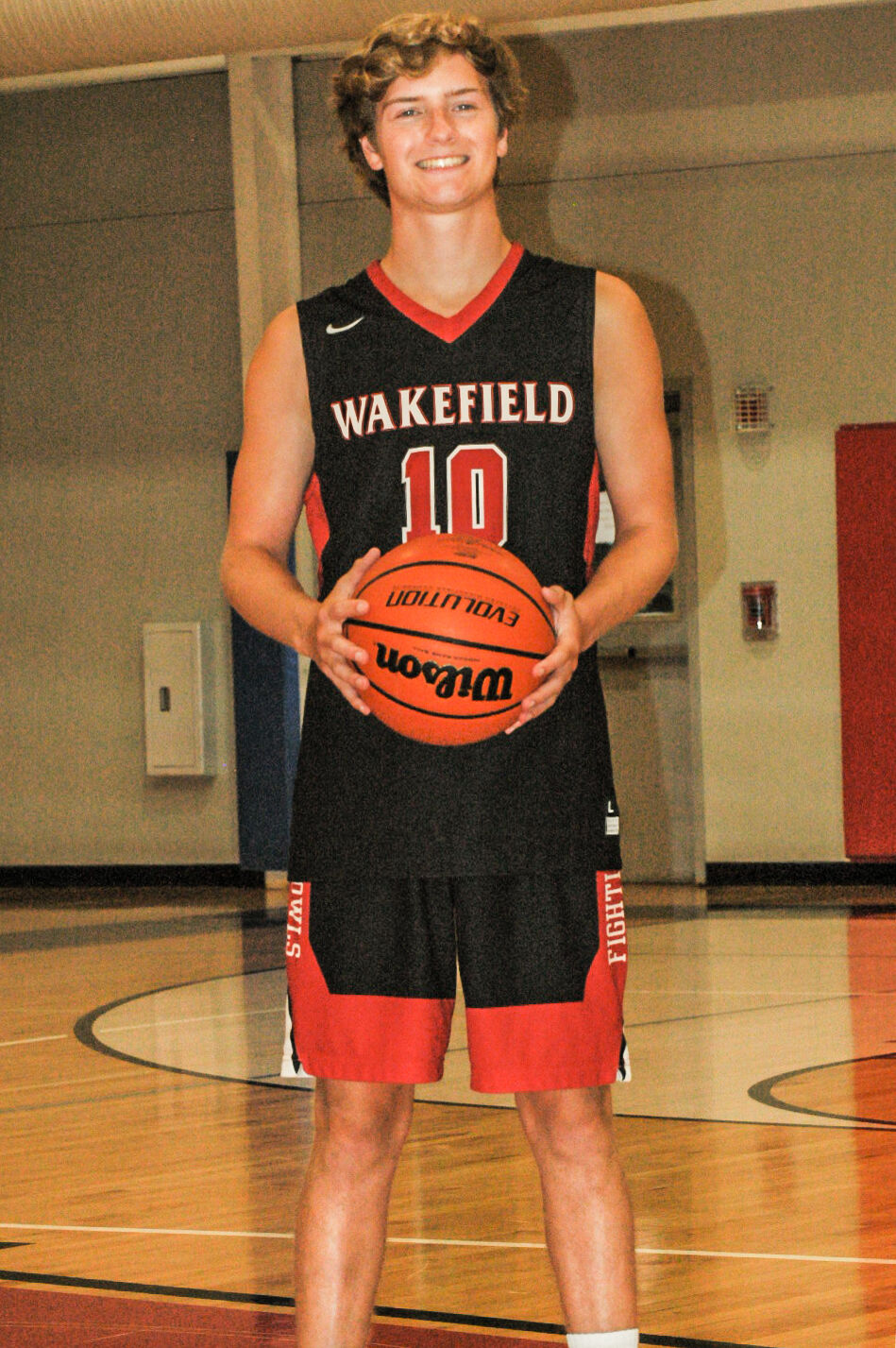 “I was always the kid who wouldn’t stop running,” says Graham Zontine. The 2021 Fauquier Times Wakefield School Boys Athlete of the Year excelled in lacrosse and soccer and threw his body around in basketball. He’ll attend James Madison University this fall.

Maybe that’s why his parents Matthew and Susan enrolled him in soccer, basketball and the local swim team by age 6.

And maybe that’s why Graham, a Wakefield School student since before kindergarten, has been a versatile multi-sport athlete for the majority of his life.

Zontine is the 2021 Fauquier Times Wakefield School after a versatile career that brought him a host of varsity letters in soccer, basketball and lacrosse.

It’s no mistake that his sports of choice happen to be ones where he’d get to run around all the time. “My parents always wanted us to be active,” he said. “I was always the kid who wouldn’t stop running.”

Growing up the fourth of five, the need to compete was a part of Zontine’s life.

“Whether it is a pick-up basketball game in the driveway or our football games in the front yard,” dad Matthew said, “Graham, as one of the youngest, had to learn to keep up at a young age.”

Competing mainly against brother Jakob, four years Graham’s elder, he developed a tenacity and scrappiness and the nickname “X-Factor” from one of his coaches.

First kicks on the soccer pitch

Soccer was Graham’s first sport and one he still favors.

He loves the rush when a corner kick comes flying in, and he and his teammates desperately try to knock it away. “Other sports, sometimes you’re doing nothing, but in soccer, it’s pretty active for everyone. So my parents thought that’d be a good sport to start with,” he said.

He’s played soccer every year since age 5, except for his sophomore year at Wakefield.

“I skipped soccer in 10th grade, and looking back, I regret that,” he said. “When I came back in 11th grade, it was an incredible experience.”

With Zontine among the midfielder corps, the Fighting Owls made Delaney Athletic Conference finals and the second round of the VISAA state tournament in his junior year.

Though not normally a starter, Zontine played most of the first half and all of the second half in that state tourney contest. “I really thought that was enjoyable,” he said. “That was a great experience with a lot of great people.”

“I’ve never had the best technique, but I’ve stuck to basketball and worked to improve,” he said.

After coming off the bench as a freshman on JV, Zontine grew into the starting point guard role as a sophomore. Making the varsity as a junior, he earned the starter’s role at the shooting guard spot.

“That was one of my favorite seasons,” he said. “I started to score more points and having a lot more fun.”

But it was Zontine’s tenacious defense that earned him the sobriquet “X-Factor.”

“Before a couple big games, my coach [Al Ford] would point to me and say that I was the X-Factor,” Zontine said. “He meant that if I could play a good game, get some steals, put up some points, get some assists, then we’d be able to win.”

The Owls nearly won a DAC tourney game against a higher-seeded opponent, making a bittersweet memory for Zontine. “We were playing Tandem Friends, and they’d already beaten us twice,” he recalled. “We didn’t expect to be able to win. They had more size and more seniors. We didn’t have any seniors at all.”

Tied 51-51 with mere seconds remaining, a 3-pointer sunk Wakefield’s hopes of an upset. The loss stung, but Zontine found solace. “I think I really impacted the score in that game. I really felt good about my performance,” he said.

The rule at Wakefield is for middle-school students to choose three sports. Zontine chose tennis, but was open to adventures with a webbed stick.

“In seventh grade my friend Harrison convinced me to join the lacrosse team,” Zontine said. “I instantly just loved it.”

It became his best sport. Zontine knew next to nothing about lacrosse, but became a force by eighth grade. “I started scoring more and getting a bigger role on the team,” he said.

As a freshman midfielder, Zontine led the Owls in goals and earned the team’s Most Valuable Player award. “I distinctly remember a couple juniors and seniors weren’t happy that a freshman won the MVP award, but, I mean, I deserved it,” he said.

With a couple six-goal games to his credit, Zontine provided more than an offensive threat. He was adept at picking up ground balls and clearing the zone with his feet.

“I was pretty good at cradling and getting the ball out,” he said. “I remember a game in tenth grade against Trinity Christian. I got the ball and three people were just whacking me left and right. To this day I don’t know how I held on to the ball, but I somehow weaseled out of it and got across the line.”

Zontine’s also had the winning goal in an 11-10 overtime win over Trinity Christian.

“It was intense. One of our defenders put a clean hit on one of their players and injured him, so they were mad at us. They were trying to hit us hard,” Zontine recalled.

Zontine cleared the ball and the Owls set up in their offensive zone. The ball came back to Zontine. “I tell myself, I’m not passing this ball, I’m just going to shoot it,” he said.

From the left of the goal mouth, Zontine made a cut to the right. An aggressive defender launched himself at Zontine, going for a check.“He tried to go overtop of me and get my stick from behind, but I moved it out of the way and got an open goal.”

Zontine flung the ball into the empty portion of the net, giving the Owls a satisfying victory.

“That was the first game of our undefeated season,” he said proudly. “We only played three games, but still undefeated.”

My father, my teacher

Matthew Zontine taught Graham in a senior-level Literature and Composition class at Wakefield this past year.

“He tells these stories in class that I’ve already heard, like how he and my mom met in Peru when they almost got robbed,” said Zontine. “So it’s funny to see my classmates hear them for the first time.”

For his senior thesis, Zontine designed a 38-page magazine covering the films of director Wes Anderson. “That took a lot of long nights, but I’m happy with how it turned out,” he said.

Zontine will enroll at James Madison University and is thinking about following in sister Hannah’s footsteps and studying computer science, with sports journalism also on his mind.

His sports fix will come with intramural basketball and club lacrosse.

He’ll also keep a close eye on younger brother Eliot, a rising Wakefield freshman who plays all the same sports Graham did.

“I need to make sure he keeps up the Zontine athletic name,” Graham said.

-Family: Father Matthew is an English teacher at Wakefield. Mother Susan is a nurse practitioner for Valley Health. Sister Hannah, 25, is a co…