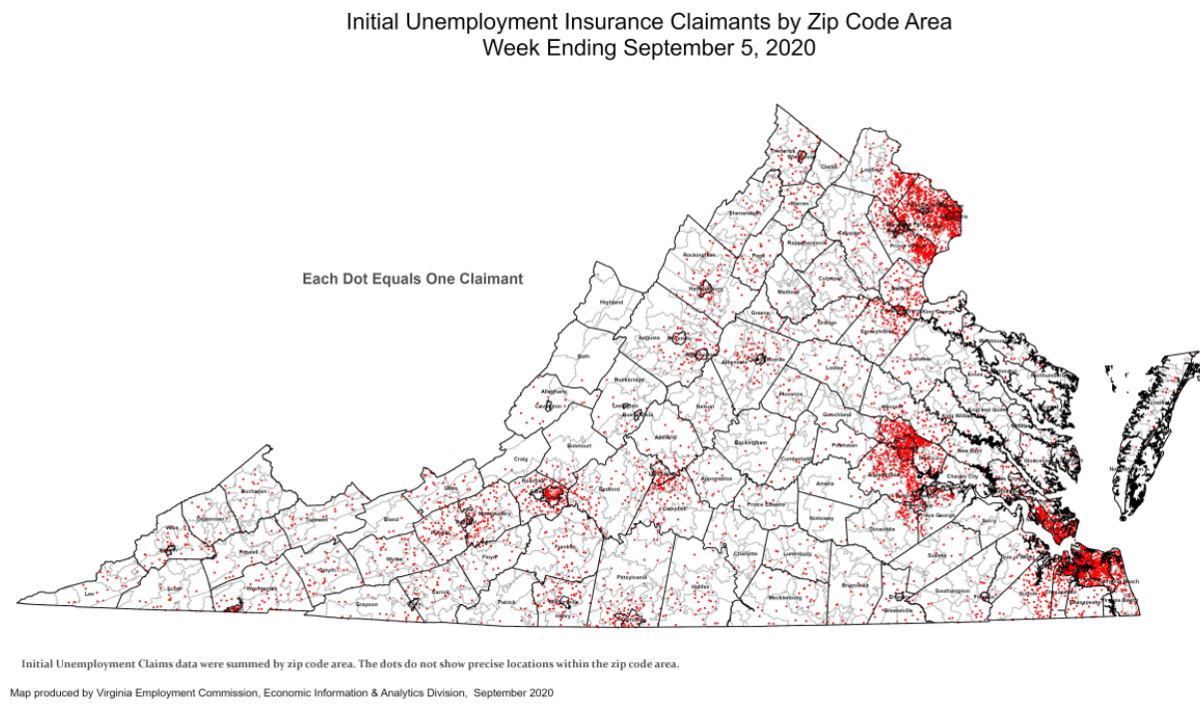 A chart shows the seasonally adjusted unemployment rate for the United States in each month since 1948, when the metric was first introduced.

The number of Virginia and Fauquier County residents receiving unemployment insurance benefits continues to creep downward, according to the latest data from the Virginia Employment Commission. The number of workers who received benefits during the filing week ending Sept. 5 is about the same as the number of filings in early April, three weeks after mass layoffs began amid the pandemic.

Since late April, the vast majority of weekly filings have come in the form of continued claims, representing workers who were laid off during a previous week – the bulk of these layoffs came from mid-March to mid-April -- and remain unemployed. Initial claims, representing workers who are newly laid off, accounted for just one in 20 claims filed in the state last week.

During the filing week ending Sept. 5, 1,064 Fauquier County residents filed for unemployment benefits, accounting for 2.8% of the county’s labor force as measured in mid-March. This is slightly greater than the 940 claims filed during the last week of March, but far fewer than the number of claims during the first week of April. By early May, the number of claims had ballooned to account for 7.4% of the county’s labor force and has declined steadily since then.

(Labor force data is measured by the U.S. Bureau of Labor Statistics.)

As has been the true throughout the pandemic, the employment situation in Fauquier County continues to be much better than in Virginia as a whole. Last week, a total of 228,620 state residents filed a claim for unemployment benefits, accounting for 5.1% of the total labor force. This percentage also peaked at a far higher number in the state as a whole than in Fauquier County; the state’s weekly claims represented 10.1% of the labor force in mid-May.

Despite the consistent improvement in employment numbers, the employment situation is still many times worse than before the pandemic. Last week there were 9.5 times the number of claims for benefits in Virginia as during the week ending March 14.

While measuring the number of unemployment claims is a timelier measure of the employment situation – data is released each week – it does not necessarily represent accurately the precise number of unemployed people at any given moment. An individual may have been laid off and not filed for unemployment benefits, for instance, or might have stopped looking for work altogether. Delays in the applications system can also affect the data.

Though not particularly useful in real time, the seasonally adjusted unemployment rate measured monthly by the U.S. Bureau of Labor Statistics seeks to measure the employment situation more precisely by calculating the number of people looking for work and dividing that number by the total labor force, which the bureau also calculates monthly.

A household survey, which along with a survey of businesses is the basis for the bureau's employment calculations, is conducted in the middle of each month. The national rate is then announced early the following month. However, state unemployment rates are not released until about 30 days after the survey, and the rates for each county and city are not announced until almost 45 days after the survey was conducted, making those rates of little real-time use in a fast-moving economic crisis such as the current one.

A similar breakdown has been true in each month since March. Fauquier County’s unemployment rate, for instance, peaked at 8.7% in April, compared to 11.2% in Virginia and 14.7% nationally.