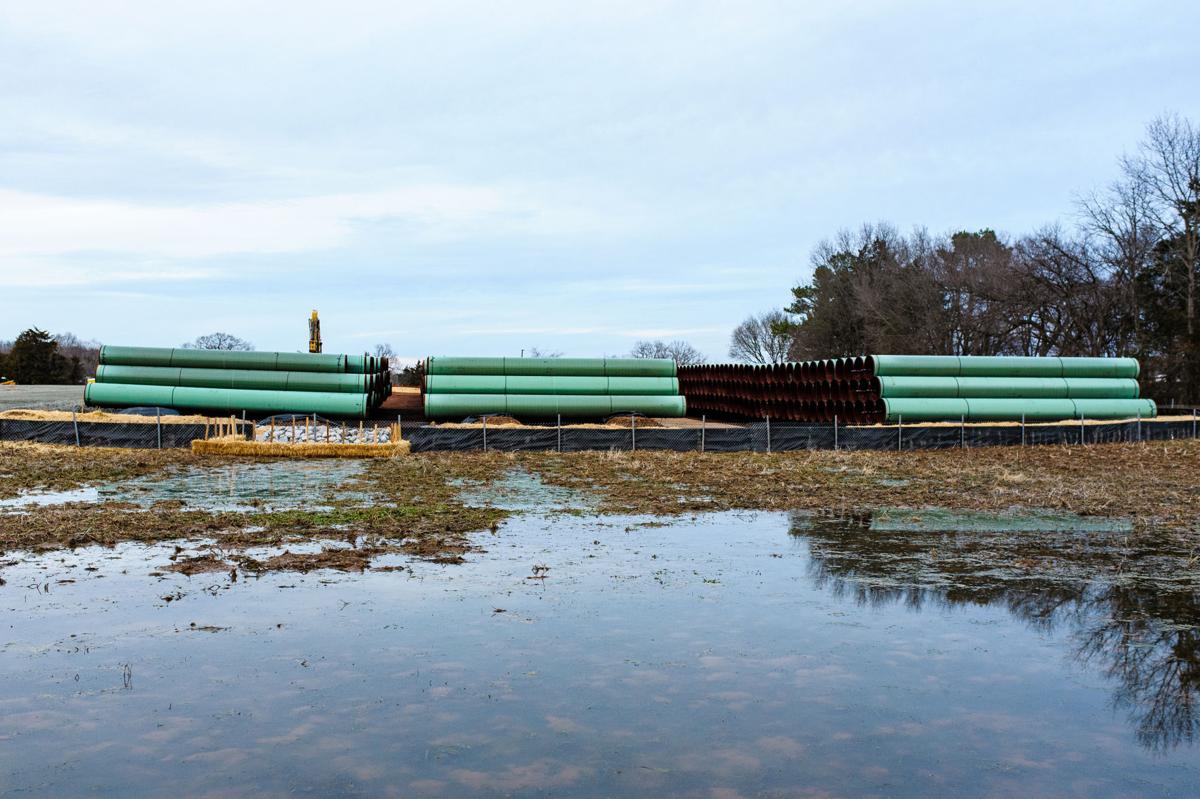 Pipeline materials  stacked at 796 Gaskins Lane in Catlett, where a Transco pipeline is currently under construction. 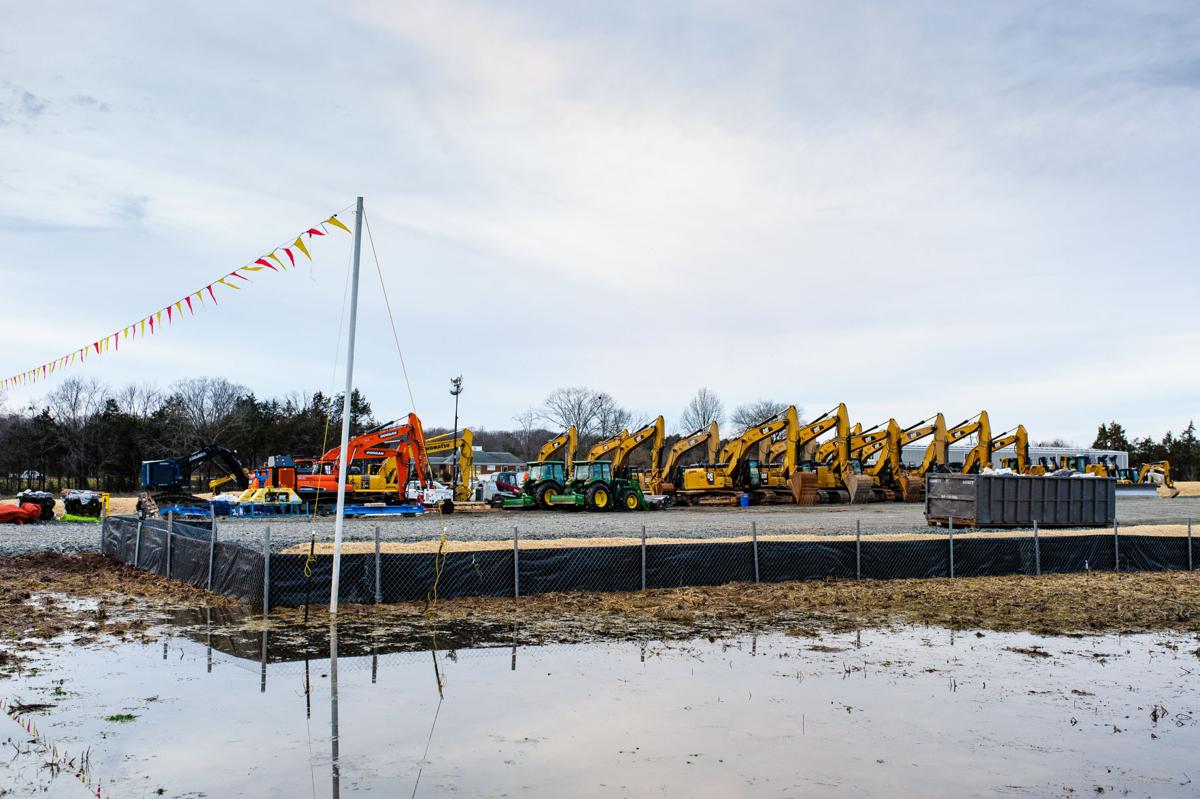 At 796 Gaskins Lane in Catlett, track hoes are lined up in a staging area, ready to begin work on the Natural gas pipeline slated to go through the area.

A Fauquier-based environmental consulting firm is asking state and federal officials to suspend a key permit for a new natural gas pipeline slated for Prince William and Fauquier counties because it will run afoul of a client’s conservation easement and a pending wetland mitigation bank in Catlett.

The consulting firm, Virginia Waters and Wetlands, says the Transcontinental Gas Pipeline expansion will directly impact the Miller Stream Bank Phase II wetland bank, which is pending approval from the U.S. Army Corps of Engineers and the Virginia Department of Environmental Quality.

A conservation easement and restrictive deed on the property, located at 2652 Catlett Road, were recorded with Fauquier County in June 2018.

Virginia Waters and Wetlands staff claim the pipeline, under its current design, will directly violate the conservation easement and prevent construction of the wetland mitigation bank altogether.

The firm is asking the Federal Energy Regulatory Council, DEQ and the U.S. Army Corps of Engineers to suspend Transco’s Nationwide Permit 12, which applies to utilities that require stream and wetland crossings.

“From the meeting that was conducted with DEQ and the USACE to discuss this impact of the pipeline, basically, it would kill the bank. The bank would not be able to be built at all, and no repair of the stream or neighboring streams on this property would be done,” said Allison Austin, director of environmental consulting for Virginia Waters and Wetlands.

Williams Partners spokesperson Erica Jones said the company is working with the landowners to reach a mutually agreeable solution for the mitigation bank project.

DEQ Mitigation Specialist Sarah Woodford said the wetlands mitigation bank is pending approval with DEQ and USACE. But she declined to comment on whether the pipeline would impact on the project.

Mitigation banks exist to allow developers to purchase of credits toward preserving area wetlands as a means of offsetting damage to wetlands or streams in other areas.

A USACE spokesperson said its Warrenton field office received a letter from Virginia Waters and Wetlands requesting the permit be suspended but had not yet reviewed it. The pipeline’s Nationwide Permit 12 was issued by USACE on Nov. 27, 2019.

“There are alternative routes that should be considered rather than losing this considerable environmental resource,” Ivers said.

DEQ, in response to the complaint, said the issue is “a legal matter which is outside of the authority granted to DEQ for review of federal consistency documents under the federal Coastal Zone Management Act.”

Transco, and its parent company Williams Partners, said the Southeastern Trail Expansion project, which involves upgrades to existing Transco pipeline facilities in Virginia, South Carolina, Georgia and Louisiana, is designed to minimize environmental impacts by maximizing the use of existing energy infrastructure corridors.

Virginia Waters and Wetlands also claims Transco failed to identify additional wetlands on the Catlett property that will be impacted by the pipeline and raised concerns that additional surface waters of the commonwealth may not be accounted for along the remainder of the pipeline’s route.

The company’s Nationwide Permit 12 allows for permanent impacts to about 2 acres of wetlands along the pipeline route. But Virginia Waters and Wetlands is requesting the permit be suspended because Transco’s permit application is incomplete regarding surface water impacts.

“Transco’s wetland delineation was incorrect for this property in Catlett. If it’s incorrect there, it’s highly likely it’s incorrect in other locations along that 7-mile stretch,” Austin said. “It’s our opinion that they missed critical information.”

Virginia Waters and Wetlands is requesting that DEQ conduct on-site inspections throughout the entire pipeline project, including an on-site jurisdictional review by USACE, to map unpermitted activity within the limits of the pipeline’s disturbance.

FERC approved the Southeastern Trail Expansion’s Environmental Assessment in October. FERC staff concluded that “approval of the proposed project, with appropriate mitigating measures, would not constitute a major federal action significantly affecting the quality of the human environment.”

A Williams Partners press release announcing the pipeline’s approval said the company aims to have the project completed and in-service by November 2020.

The pipeline will cross 20 waterbodies, including five perennial streams -- Cedar Run, Kettle Run, Owl Run, South Run, and Walnut Branch -- and will impact about 2 acres of wetlands in Fauquier and Prince William counties, according to FERC’s environmental assessment. The project also will increase the horsepower at a natural gas compressor station in Manassas by 20%.

Several state and local environmental organizations, including the Prince William Conservation Alliance, Piedmont Environmental Council, Mothers Out Front and the Chesapeake Climate Action Network Action Fund have asked state agencies to perform a more comprehensive project-specific, state-led environmental review. But DEQ says such a request is beyond its legal authority.

Fauquier County’s Board of Supervisors unanimously passed a resolution in November calling for the suspension of all planning, proposals, surveying, or construction of the Southeastern Trail Expansion project through Fauquier County.

Dels. Lee Carter, D-50th, and Elizabeth Guzman, D-31st, who represent parts of Prince William and Fauquier counties, signed a letter to Gov. Ralph Northam (D) in October, urging him to direct state agencies to reject permits for the Southeastern Trail Expansion project. Northam has so far not responded to the letter.

Food and Water Action, a nonprofit environmental organization, submitted a formal petition Jan. 27 demanding a state-led review of the pipeline’s impacts to local waterways affected by its construction.

Food & Water Action Virginia organizer Jolene Mafnas said the Virginia DEQ has a responsibility to review the claims like those made by Virginia Waters and Wetlands.

“This just goes to show that these companies and federal agencies are putting profit over both clean water and vital conservation efforts. We are calling for Governor Northam’s administration to move swiftly to revoke its state permit 12 certification and halt the construction of the pipeline,” Mafnas said.

The Southeastern Trail Expansion is one of two pipeline projects planned for Prince William and Fauquier counties this year. Virginia Natural Gas is seeking state approval to construct 9.5 miles of new pipeline across both counties to connect its existing pipeline system to the expanding Transco pipeline system.

The new pipeline is needed to deliver natural gas to a new privately financed gas plant known as “C4GT” planned for Charles City County, outside Williamsburg.

The company also wants to build a new compressor station and has selected two potential 25-acre sites near the intersection of the Transco pipeline and the new VNG line located on Nokesville Road in Prince William County for its construction.

Amid concerns about the proposed Atlantic Coast pipeline, Virginia lawmakers last year approved a more thorough approval process for natural gas pipelines. But according to state officials, the new law won’t apply to the 7.7-mile expansion of an existing pipeline proposed in Fauquier and Prince William counties because of the timing of the law.

This pipeline project was permitted in a process out of the public view and with no community notice. No one I have talked with about it had ever heard of it before articles here and in Prince William Times. Come to February 12, 6:30 pm Community Meeting in Manassas at Pat White Center at Ben Lomond to learn more and options for community involvement.

Wetlands remediation credits sell for $80k per acre or $160k per wooded acre. This mitigation bank is 32.8 acres, so they're getting between $2.7 million and $5.4 million by fleecing landowners and developers over an Obama era expansion of the definition of navigable waterway protection.

No "conservation" is being done here. This is about money.