Fauquier County supervisors are slated to vote tonight on a resolution affirming the board's commitment to the Second Amendment and stating its "strong" opposition to any future state law that might infringe on the constitutional right to keep and bear arms.

The board released this week a slightly modified version of the original resolution. The measure replaces the words "is concerned about" with "strongly opposes" in this phrase: "the Fauquier County Board of Supervisors strongly opposes the passage of any law that would unconstitutionally restrict the rights of our citizens" under either the U.S. or Virginia constitutions.

Like the original resolution, the modified version also calls on the Virginia General Assembly to pass a short list of gun-safety measures. They include: waiving the sales tax on gun safes and gun locks, strengthening penalties for adults who allow children unsafe access to guns, funding firearms safety training in schools and increasing state funding for mental health screening and services.

The measure also states the board’s opposition to any legislation that would restore gun rights to convicted felons.

The Fauquier resolution would not declare Fauquier County a “Second Amendment sanctuary.”

The Prince William  Board of Supervisors approved a resolution early Wednesday morning to declare Prince William a "constitutional county." Like Fauquier County's resolution, Prince William's does not include the word "sanctuary" and makes no request of local law-enforcement agencies to not enforce new state gun laws. Other "Second Amendment sanctuary" resolutions passed around the state include such a request.

The Prince William supervisors approved their measure in a 6-2 vote after three hours of public testimony in a meeting that drew about 1,000 people.

Virginia Attorney General Mark Herring (D) said last week that “Second Amendment sanctuary” resolutions will have “no legal effect whatsoever.” An official opinion from the attorney general is expected in the coming days.

Del. Michael Webert, R-18th, and U.S. Rep. Denver Riggleman, R-5th, both have issued statements in support of the sanctuary declarations. Each represent portions of Fauquier.

Webert said in a Nov. 27 news release: “I am happy to see so many counties declaring themselves Second Amendment sanctuaries, and I stand fully behind our right to bear arms that are guaranteed to us in the U.S. Constitution and the Virginia Constitution.

“As most of you are aware, the Second Amendment sanctuary resolutions are not legally binding. However, it is vital to send a strong message to Richmond that we, law-abiding citizens, will not be treated like criminals because we possess certain types of firearms and firearm accessories.

Webert concluded, “As I have stated previously, I will not entertain emotional policy proposals that seek to undermine our Second Amendment rights and punish law-abiding citizens. I hope you will join me in this fight to protect our freedoms. Sic semper tyrannis.”

Riggleman gave a speech Dec. 5 on the floor of the House of Representatives in which he said, "I am a strong supporter of the Second Amendment and I am proud to stand with the people that are speaking up for all of us. I support this movement with my whole heart."

State Del. Elizabeth Guzman, D-31st, whose district includes parts of both Fauquier and Prince William counties, said she is committed to working with both Fauquier and Prince William counties’ boards of supervisors to address residents’ concerns but stressed that any new laws passed by the incoming Democratic-majority General Assembly will be constitutional.

"I have always respected the rights of law-abiding gun owners, and the laws we will pass in Richmond this next legislative session will be fully compliant with the Virginia and U.S. constitutions,” Guzman said in a statement.

Guzman went on to say that she shares many of the same priorities outlined in Fauquier’s proposed resolution, including the need for additional mental health screening services, strong penalties for adults who allow children unsafe access to firearms and the need to waive the sales tax on gun safes and locks.

“I am heartened that the Fauquier County board and I share many of the same priorities,” Guzman’s statement said. “I agree with [Attorney General] Mark Herring’s statements from last week where he mentioned that second amendment sanctuary resolutions have no legal effect whatsoever.”

Click here to read the recently revised version of the proposed resolution: 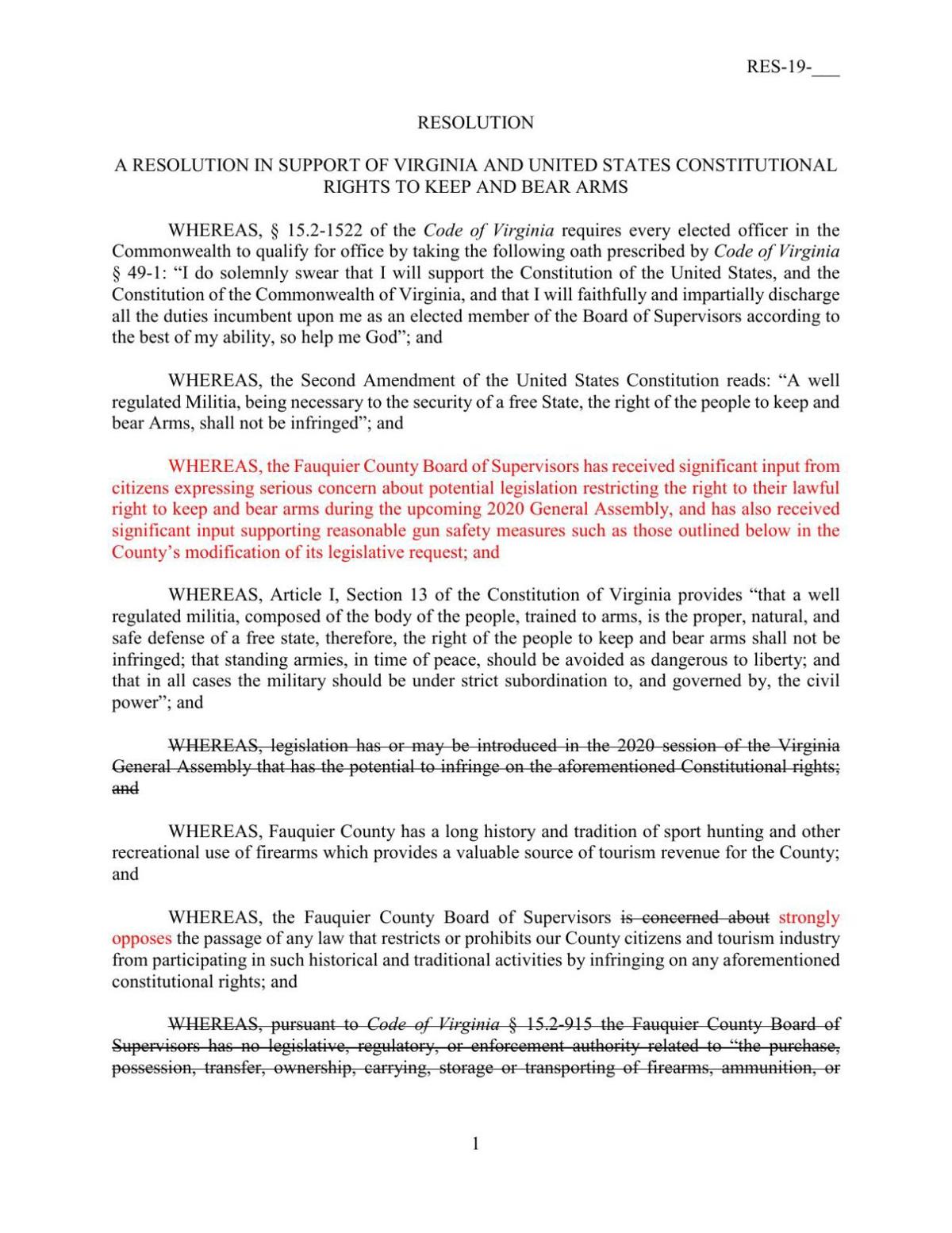 Fauquier Times is planning on live streaming the meeting through Facebook Live, beginning at 6 p.m. Visit https://www.facebook.com/FauquierTimes to watch.

84 counties and cities are now in open rebellion. What more will it take to get the attention of these people in Richmond? Many more tonight.

It's great to see the large turnouts supporting our Constitution but it would have been easier to avoid if the masses had turned out to vote!!

Isnt that the truth. Look what we are

Got and are getting. Shameful to have Northam, Fairfax and Herring in there. And now the leftist are taken both State houses.

God is helping you.... he and most others may know better than you.... maybe??

Fortunately I'm not Nancy Pelosi but I am Catholic. I HATE leftist and I know they hate me and I'm glad they do.

God is helping you.... you're unable to see or understand

Why does this matter? Would you like to become a felon on July 1, 2020 although you are a law-abiding citizen today?

Delegate Webert hits on the main point why a stronger message needs to be sent by the Fauquier Board of Supervisors (BOS) to the VA General Assembly: “…it is vital to send a strong message to Richmond that we, law-abiding citizens, will not be treated like criminals because we possess certain types of firearms and firearm accessories.”

Fauquier County’s resolution (see link embedded in BOS agenda link below) does not address how Fauquier County governance will uphold 2nd amendment rights if the General Assembly passes legislation that infringes upon these rights.

It is unconscionable that the Board of Supervisors (BOS) did not seek public comment before publishing the resolution and for not permitting comments until AFTER the resolution is passed (based on the above agenda).

What you can do: Concerned citizens are urged to contact all BOS members (see link below) BEFORE the 12/12 meeting as your comments will have no effect after the resolution is passed.

Furthermore you are urged to contact your VA General Assembly representative BEFORE the end of December: https://whosmy.virginiageneralassembly.gov/

If you don't speak now your comments won't matter.

Unless you are harboring high volume military grade rifles with bump stocks.... what is your concern??