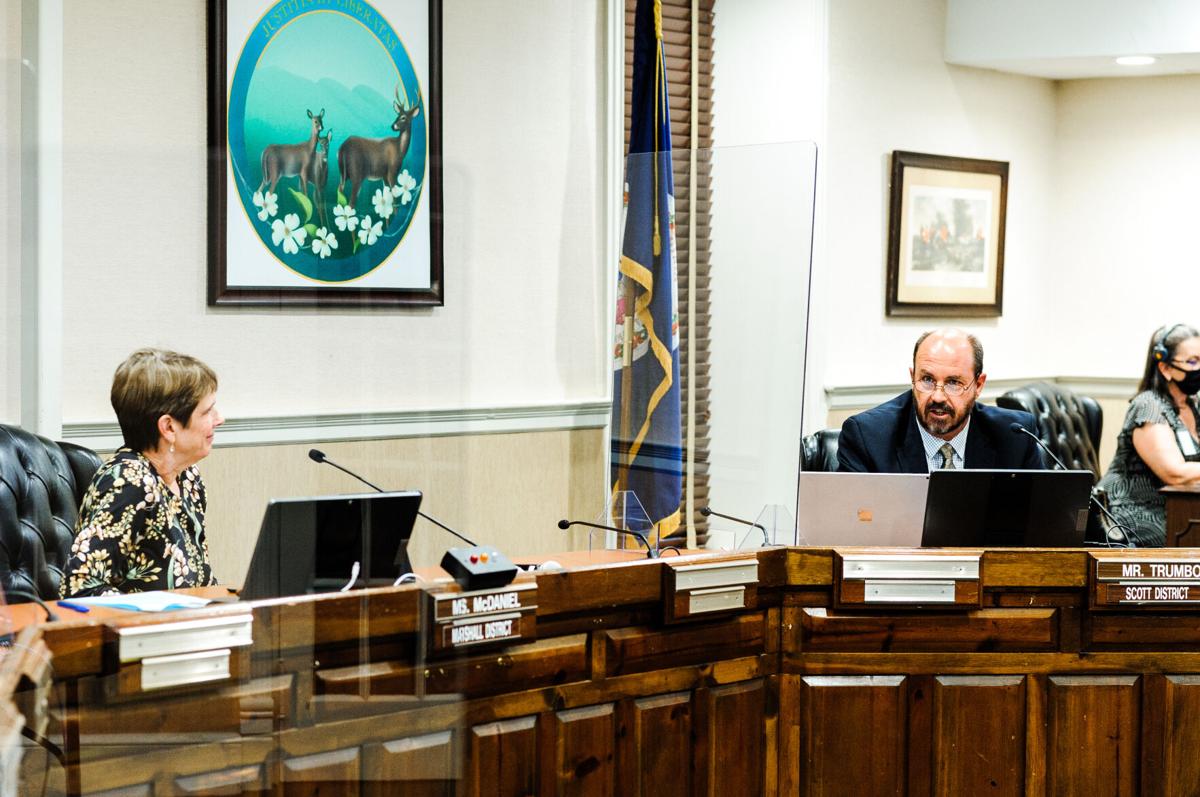 Supervisor Holder Trumbo (Scott District) speaks during a Sept. 10 meeting of the Fauquier County Board of Supervisors as Board Chair Mary Leigh McDaniel (Marshall District) looks on. 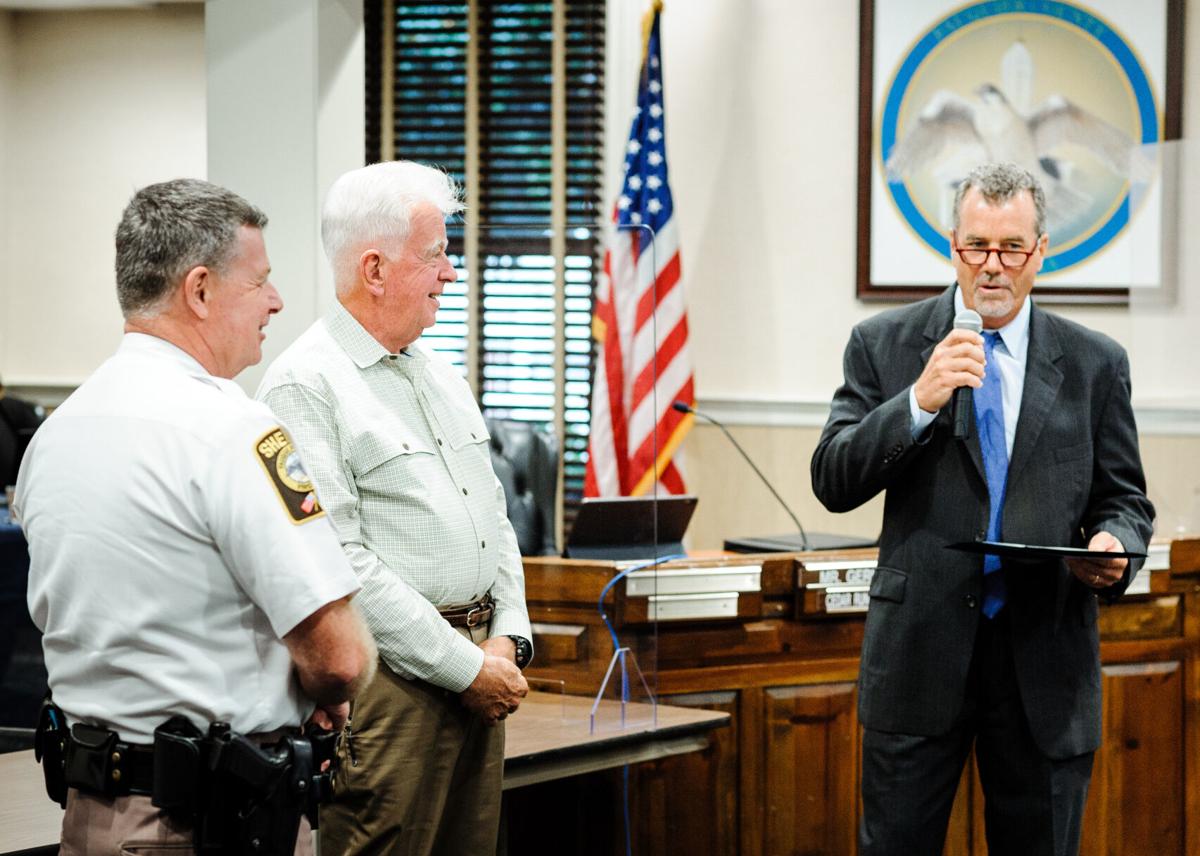 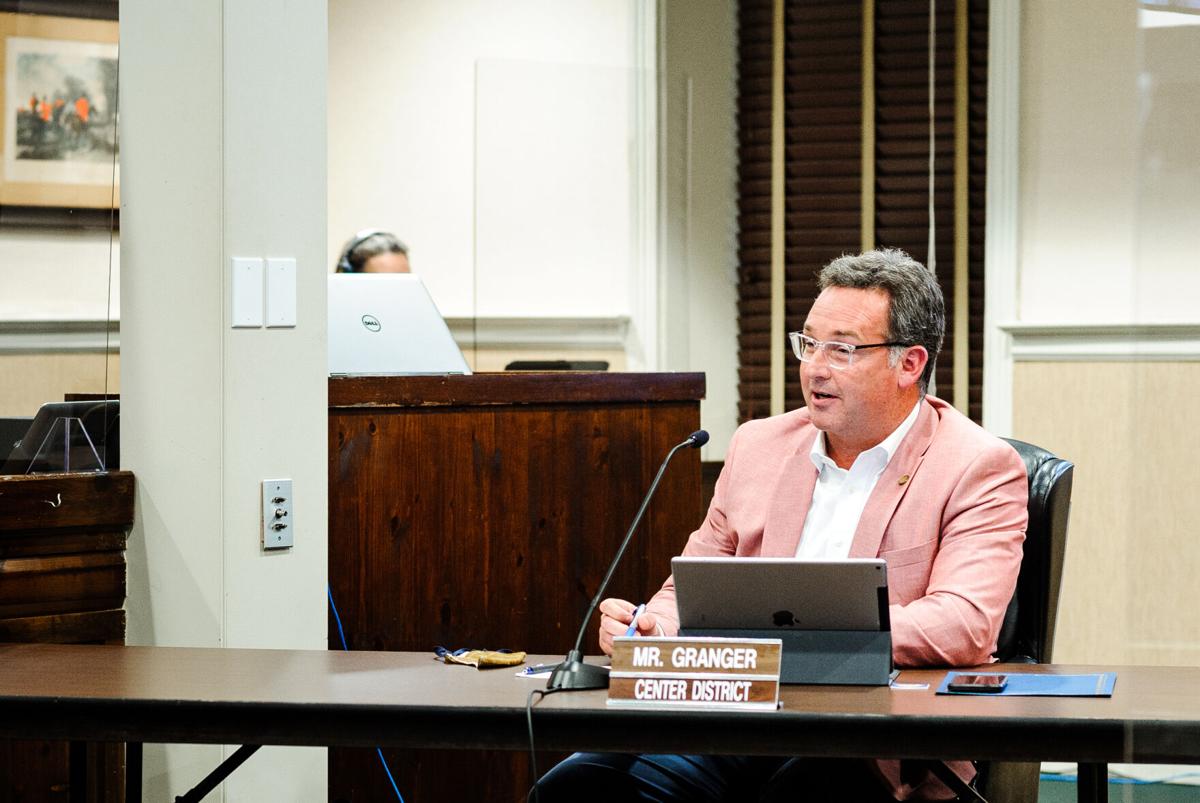 Center District Supervisor Chris Granger speaks during a Sept. 10 board of supervisors meeting at the Warren Green Building. 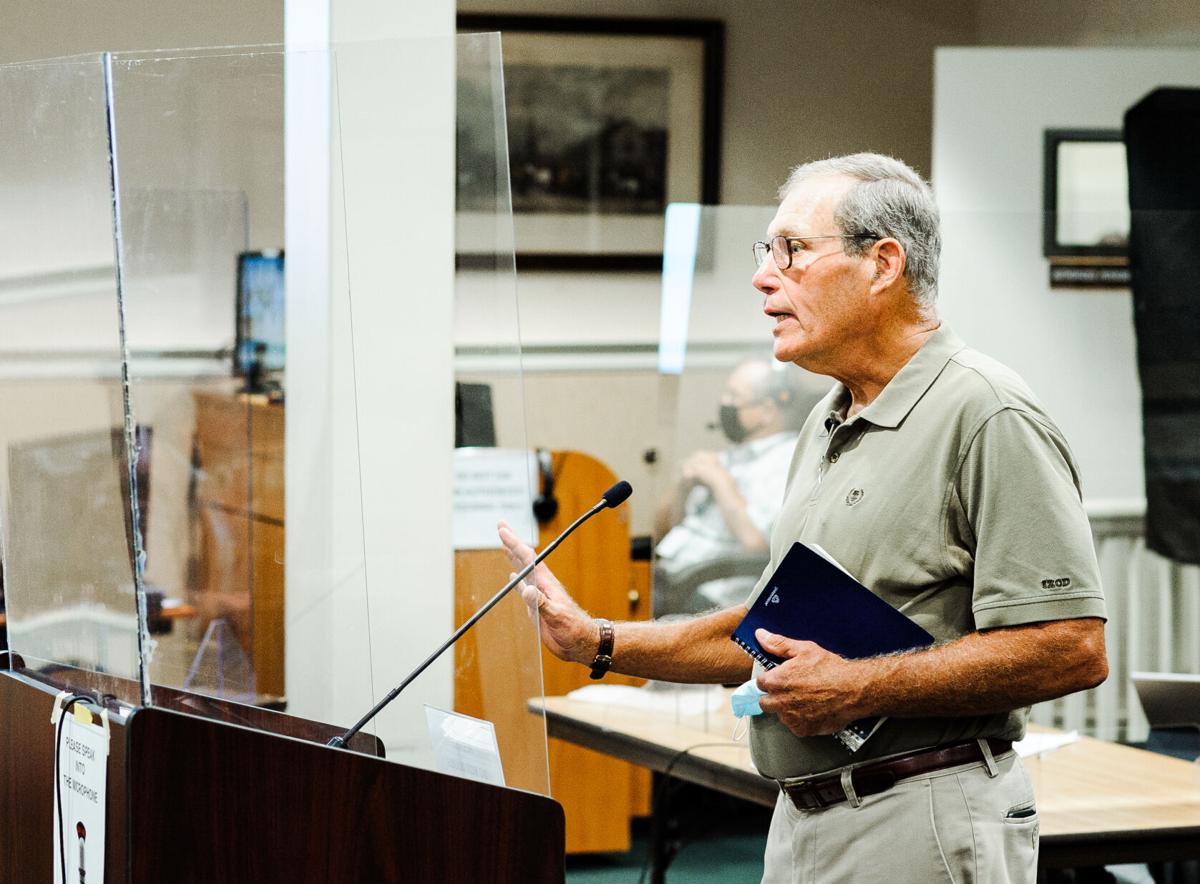 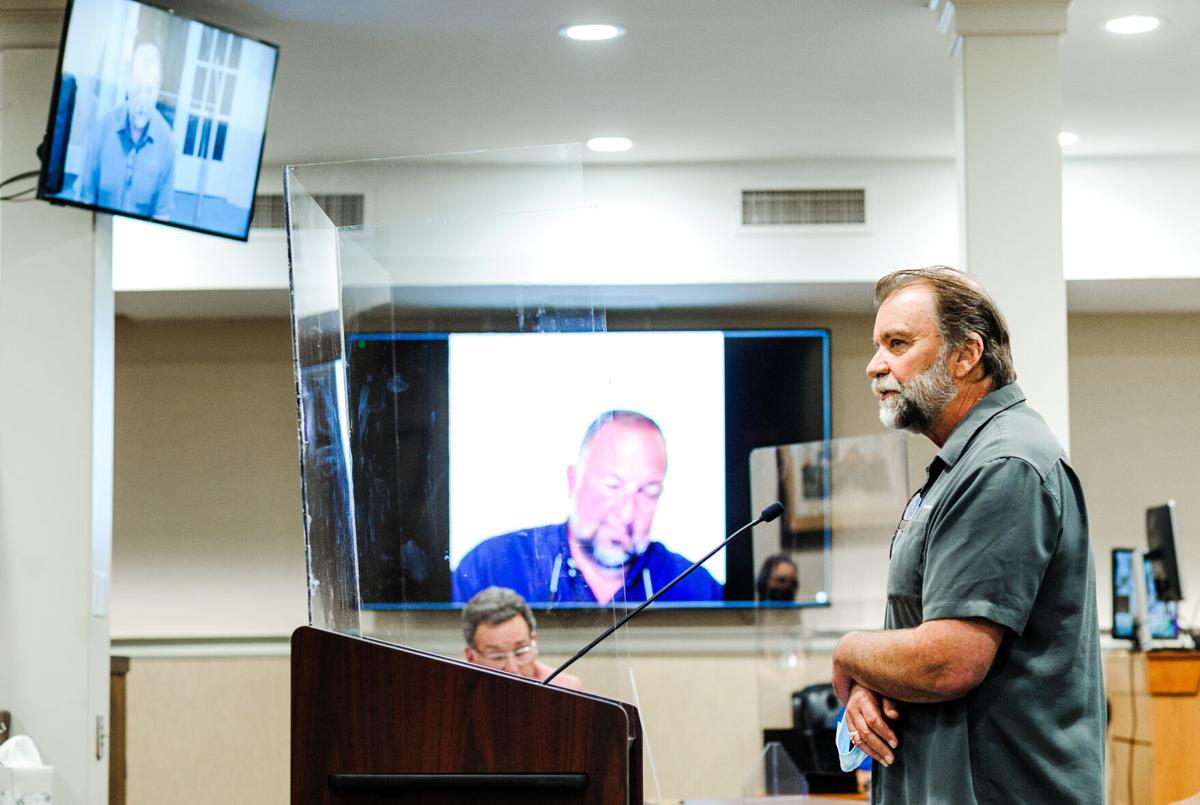 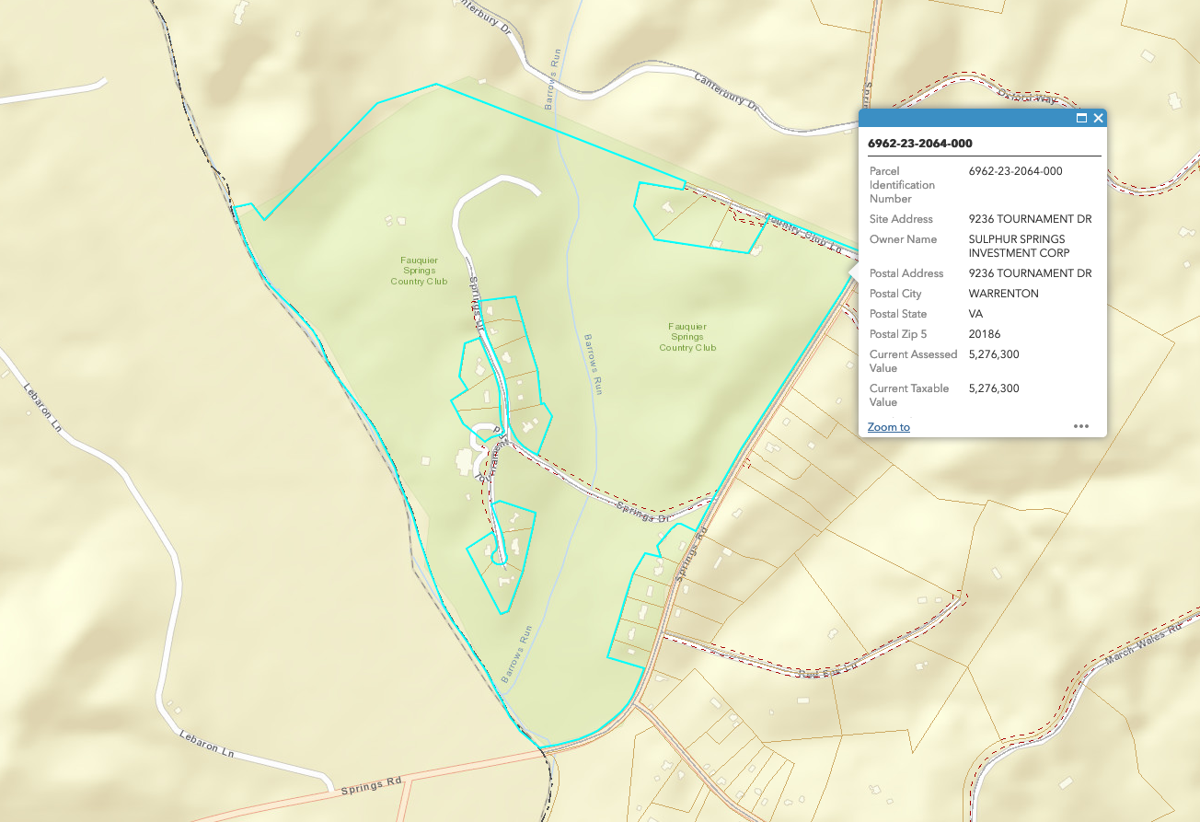 A screenshot from Fauquier County's GIS shows the boundaries of the 198-acre parcel that comprises Fauquier Springs Country Club. The parcel borders Springs Road to the south and east, and the Rappahannock River to the west.

Supervisor Holder Trumbo (Scott District) speaks during a Sept. 10 meeting of the Fauquier County Board of Supervisors as Board Chair Mary Leigh McDaniel (Marshall District) looks on.

Center District Supervisor Chris Granger speaks during a Sept. 10 board of supervisors meeting at the Warren Green Building.

From a fiscal standpoint, Fauquier County supervisors’ most significant action at a regular meeting Thursday night was approving the acceptance and draft spending plan for an additional $5.27 million allocation from the federal Coronavirus Relief Fund, created by Congress as part of the CARES Act.

The most excitement, though, surrounded the unanimous vote to approve the rezoning request for the former Army barracks in Vint Hill, the second of third procedural hurdles the proposed Vint Hill Lofts renovation project must overcome before construction can begin. Cheering could be heard in the meeting room as a small group of people watched the vote on a television screen on the sidewalk outside.

Among a host of more minor items on the agenda – for instance, supervisors approved the renewal or modification of seven agricultural and forest districts – a conservation easement for the 198 acres comprising Fauquier Springs Country Club also passed with a unanimous vote.

Though the subject of a lengthy discussion at a work session Thursday afternoon, there were no speakers at a public hearing about the second allocation of federal relief funds to the county government. Supervisors voted unanimously to accept the funds, of which $5.27 million will be available to the county government with an additional $944,265 distributed proportionately to the county’s three incorporated towns.

At the work session, county officials presented a spending plan – which can be adjusted going forward with the consent of supervisors -- for the $3.85 million of the latest federal disbursement of relief funds, bringing to $9.54 million the total federal relief funds that have been set aside for specific purposes; between the two federal disbursements, a total of $1.14 million have not been earmarked.

The school division began its academic year Aug. 24 teaching using a completely “virtual” model, with students receiving instruction remotely via the internet. In light of this fact and the widespread expansion of work-from-home models during the pandemic, the two spending plans passed by supervisors have been focused on costs associated with expanding internet access and purchasing digital hardware and software; $5.89 million, or 62%, of the federal funds earmarked by supervisors so far have gone to technology costs.

In the latest spending plan, the largest single line item, $825,000, will fund internet “redundancy” work at county offices and other county-owned buildings, like libraries and community centers. “Right now, if [the internet connection] goes down, it’s down,” said Deputy County Administrator Erin Kozanecki.

Creating “redundancy,” she said, would add a second hard line to county buildings to act as a backup during outages. The new equipment will also increase permanently the speed and capacity of the internet service at those buildings, including for members of the public using Wi-Fi at libraries and community centers.

In addition to the $1.25 million set aside from the first CARES Act allocation, $400,000 was set aside from the second disbursement to purchase 150-foot flatbed-mounted communications towers, similar to the one currently in use on Viewtree Mountain, to expand the Data Stream Technologies broadband network.

County Administrator Paul McCulla said at the work session Thursday that the $400,000 would fund the purchase of three temporary towers, adding that two to three companies have expressed interest in selling them to the county. The exact cost is not yet known, however, and the timeline in which the towers could be purchased and installed in not yet certain, either.

Fauquier County will receive a second allotment of $5.27 million from the Coronavirus Relief…

Supervisor Rick Gerhardt (Cedar Run District) added that the total cost for purchasing the three towers and installing the necessary signal broadcast equipment would be about $900,000.

Since it is unclear how soon the temporary towers could be deployed, Gerhardt and McCulla suggested using a portion of the federal relief funds to lease space on existing towers – or towers soon to be built – in the interim.

Gerhardt also mentioned that leases have been executed on land in Orlean and southern Fauquier County to build permanent towers, and these may be ideal places to set up the temporary towers while the permanent structures are being completed, after which Data Stream equipment could be transferred to the permanent fixtures.

Since the last meeting of the board of supervisors, $500,000 was set aside to provide at no cost an internet connection through Comcast or Data Stream to the homes of low-income families with children in county schools; the school division will administer this program.

The developer is now required to submit an application for the proposed 183-unit apartment complex, dubbed Vint Hill Lofts, with more details about the project to the planning commission and board of supervisors. Based on that application, supervisors must approve a special exemption before construction can begin.

Bill Downey, of New Baltimore, was one of several residents and business owners to speak in support of the project at the public hearing Thursday.

Downey’s construction management business, Downey & Scott, is headquartered in Vint Hill and employs 22 people locally. He told a story about how his company launched a recruitment drive a few years ago especially targeted at young adults who had just graduated college, but some potential recruits were reluctant to relocate to Fauquier County. “The biggest detriment,” he said, “is the lack of affordable housing.”

Chris and Debbie Cloud, real estate agents based in Marshall, also spoke in favor of the project, citing frequent inquiries they receive about rentals in the area. “People are desperate for rental housing,” said Chris Cloud. “And it’s disheartening to show them what’s available in Fauquier County.”

The only dissenting voice was that of Jim Mills, a resident of the Silvermead subdivision in Vint Hill. Mills expressed concern that the Vint Hill Lofts project will pave the way for more residential housing in Vint Hill, which he opposes. “That’s the fear,” he explained, “That we’re going to have a lot more housing creep than we bargained for.”

Mills told supervisors that others in the Silvermead neighborhood also oppose the project but didn’t receive a letter from the county informing them of the upcoming public hearing.

Supervisor Holder Trumbo (Scott District), whose district includes Vint Hill, spoke at length about the important of preserving the buildings and character of the former military base and praised the developer and some of their other projects which he has visited. He said the developer had gone “above and beyond” in holding frequent community meetings over the application process.

After the former barracks have spent so many years deteriorating, Trumbo added, “Now you have a chance to turn it into something positive in the community.”

As part of the consent agenda, supervisors voted unanimously Thursday to grant a permanent conservation easement for the 198 acres along the Rappahannock River that comprises Fauquier Springs Country Club.

The property, which includes 22 improvements, is currently assessed at $5.28 million. Granting an easement would cost the county government approximately $11,000 annually in lost real estate tax revenue, according to the staff report.

About one third of the land is currently zoned “village,” with the remaining land zoned “rural agricultural.” Under existing zoning law, the property could be subdivided into as many as 72 lots, according to a 2018 assessment by the county’s development services division.

Under the terms of the easement, the land can be still be subdivided into as many as three separate lots, and a maximum three “primary” residences – along with three “secondary” residences -- could be built on each lot. No new structure can be built within view of Springs Road.

During Thursday’s work session, supervisors and County Attorney Kevin Burke discussed the proposed easement. Granger and Trumbo expressed skepticism about the proposal, especially because the terms of the agreement allow for some new residential structure to be built in the future. 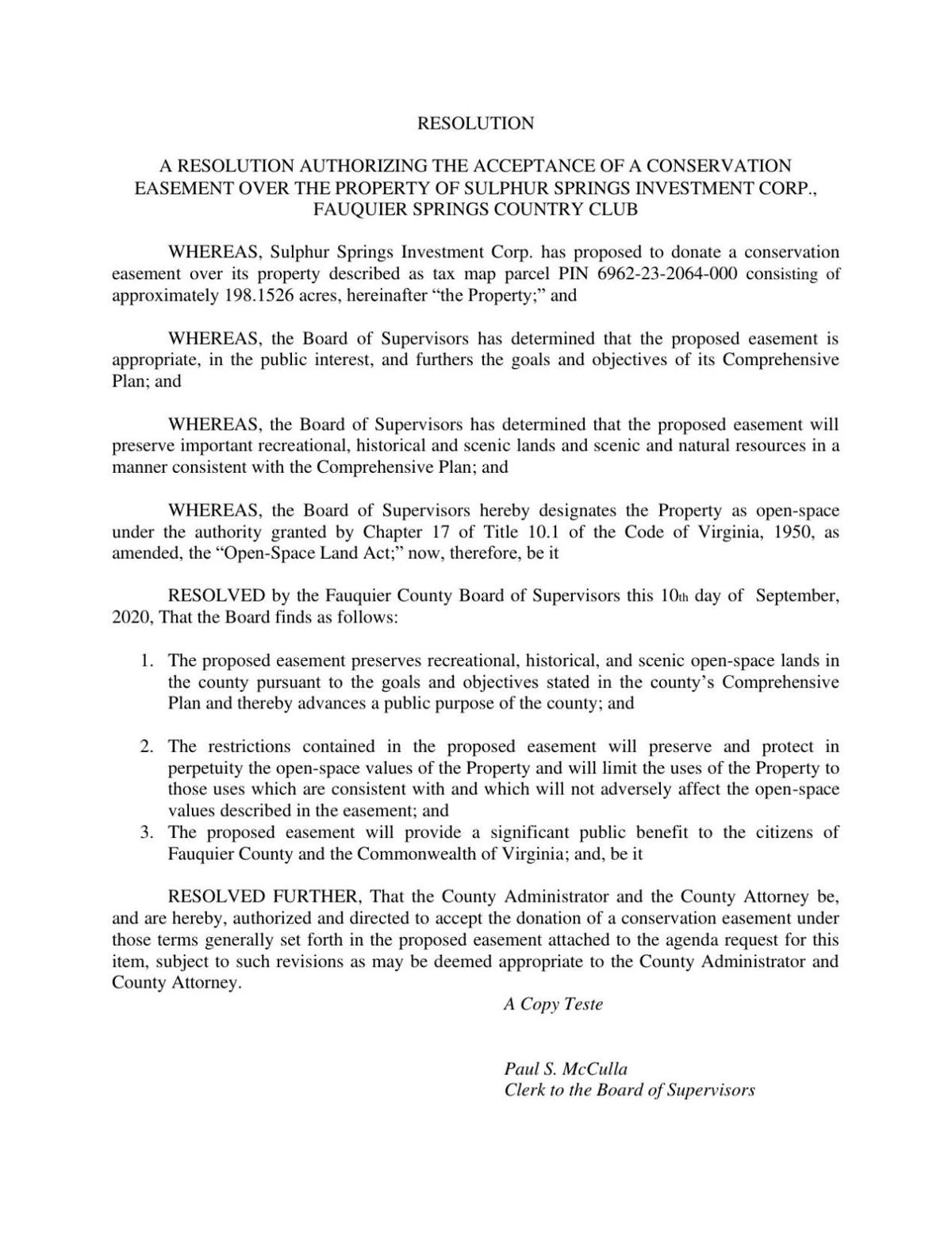 Burke called the proposal “unusual” because most of the land is currently used as a golf course and said the issue for supervisors to consider is what would happen to the land if the country club were ever to go bankrupt.

Trumbo expressed similar concerns, emphasizing he is “always glad for the opportunity to preserve rural land” but was concerned about the uses allowed under the terms of the proposed agreement.

The draft agreement was not altered and remained on the consent agenda for the regular meeting, however, and both Granger and Trumbo dropped their objections and voted ‘aye.’

• $297,343 to pay for equipment and personnel directly related to the county’s emergency management response to the pandemic;

• $275,000 to a develop a subsidized day care program for low-income residents;

• $62,500 for administration and origination fees for the county’s line of credit;

• $50,000 to the Fauquier County Department of Fire Rescue and Emergency Management to fund additional work space during the pandemic, if it is needed;

• $15,000 to outfit the John Barton Payne building for jury trials and

• $10,000 to fund COVID-19 testing for county employees who have experienced a possible exposure to the virus.

Sept. 10 actions of the board of supervisors

At a regular meeting Thursday evening, supervisors voted to:

• Accept a second allocation of $6.21 million from the Coronavirus Relief Fund;

• Approve a rezoning request for the former barracks at Vint Hill;

• Approve a lease of office space at the Warrenton-Fauquier Airport;

• Allow a community center at the Carter’s Crossing housing development;

• Abandon an unused portion of a street in Paris;

• Amend the zoning ordinance to allow for boundary adjustments between adjacent conservation easements;

• Raise the expenditure threshold for the county’s procurement policy;

• Raise the threshold for the county’s procurement policy and

All votes were unanimous. Minutes from the meeting can be viewed here.