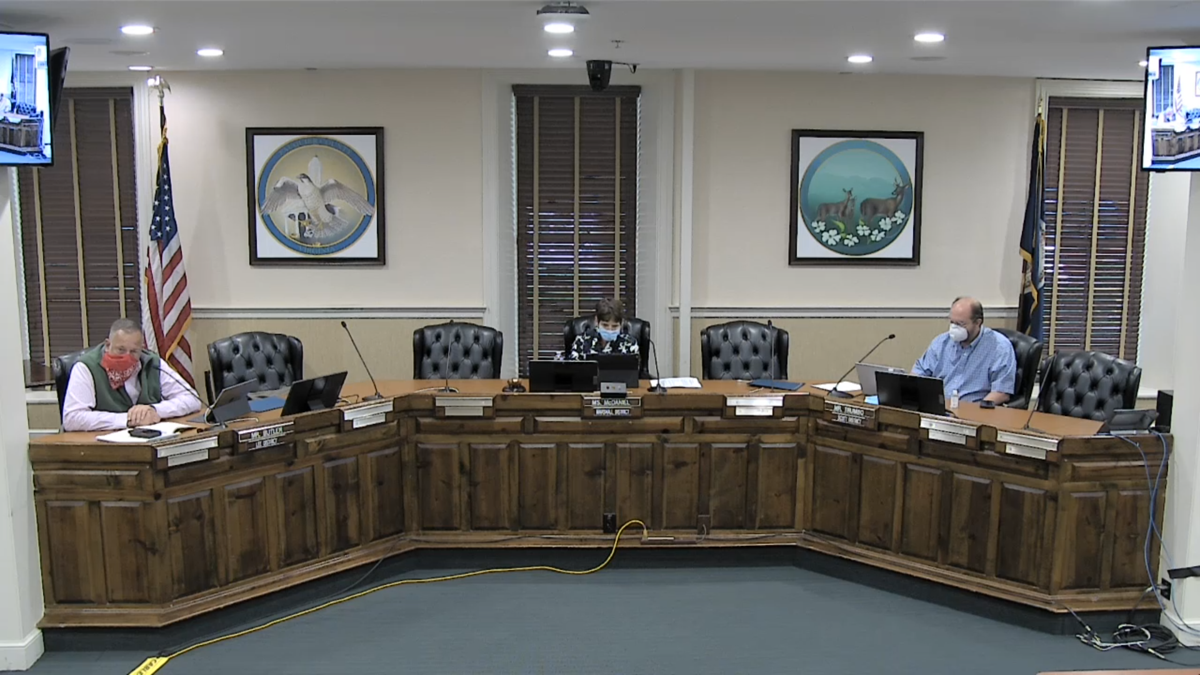 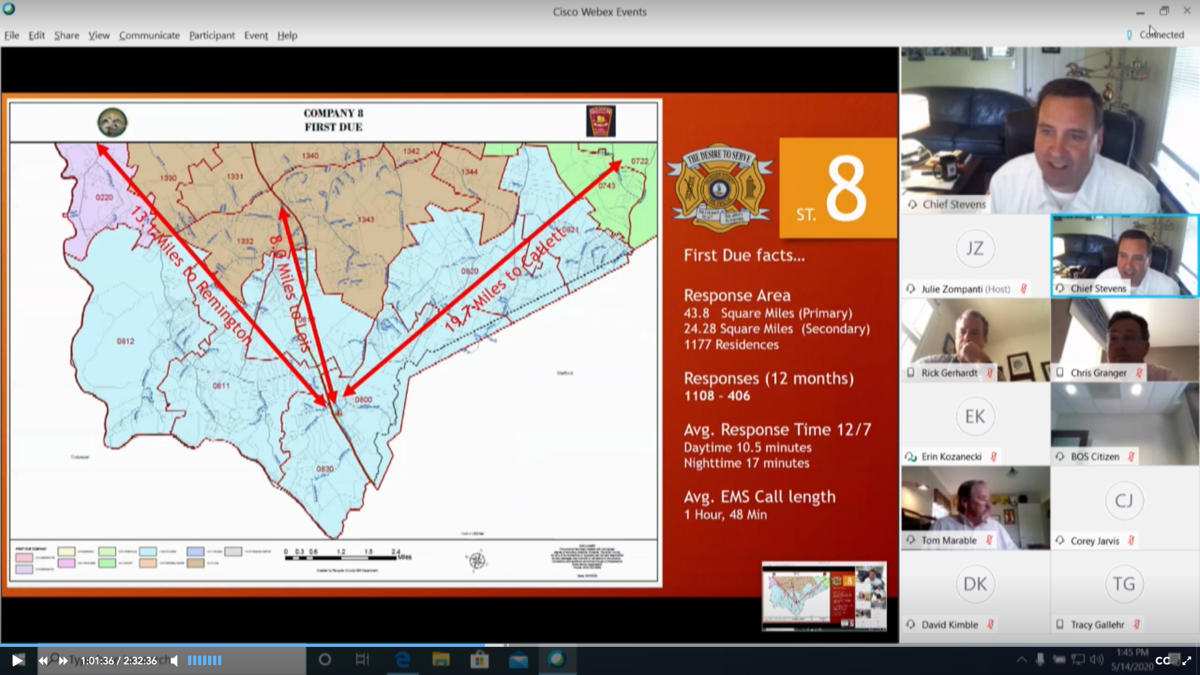 A screenshot from the video livestream of the board of supervisors work session shows Fire and Rescue Chief Darren Stevens (upper right) presenting a slideshow about an application for a FEMA grant that would fund additional fire and rescue staffing.

At the regular meeting of the Fauquier County Board of Supervisors on Thursday evening, the consent agenda, which passed without discussion, had a few of the usual odds and ends.

There was a resolution to expand the Opal Service District by 83 acres, for instance, and a resolution to modify a contract related to the construction of wastewater treatment systems in Catlett and Calverton.

But, like everything else recently, the agenda and general atmosphere were dominated by the novel coronavirus pandemic and its ramifications.

With the meeting having returned to its usual meeting space in the Warren Green Building, only three supervisors were physically present in the room – all wearing masks, along with the county staff present - while the two remaining supervisors participated through a video conferencing service.

To comply with the prohibition on gatherings of more than ten people, no one else was allowed in the room. Members of the public had several means to submit comments to the supervisors for citizen's time and the public hearing item, but no one did. The regular meeting lasted about 20 minutes.

Among the 14 items on the consent agenda, supervisors voted to allocate an additional $75,000 from the county’s contingency reserve to offset costs related to the COVID-19 response, leaving $13,206 in the reserve for the last two months of FY2020.

The latest allocation is specifically “to enhance public services for the safety and welfare of citizens and county personnel while citizens conduct county business,” according to the text of the resolution.

In March, supervisors allocated $100,000 from the reserve for the county’s response to the pandemic, $65,700 of which went to the purchase of personal protective equipment for first responders. An additional $26,203 was spent on technology upgrades, bringing the total to $91,903. About $68,903 is eligible for reimbursement from the federal and the state, according to the county staff report, but it is unclear when those funds will be reimbursed.

Supervisors on Thursday also voted to allocate $25,000 to the Fauquier County Emergency Grant Fund, which was created by the county’s economic development authority as a response to the pandemic, from the contingency reserve.

According to the county's director of economic development, Miles Friedman, the emergency grant fund had exhausted its initial $25,000 capitalization, which came from the EDA. After 13 of 50 applicants had been awarded with funding from the program, Friedman expects the new funding from the county will enable about 12 or 13 additional grants. "We continue to seek additional funding, he said, adding "we will not open up the applications at this point, as we have plenty of worthy proposals to choose from."

The single public hearing item – there were no comments submitted by members of the public – was a proposed ordinance that seeks to address the continuity of county government during the pandemic. It was unanimously approved.

The ordinance provides, among other things, a succession plan for the heads of county departments in the event they are incapacitated, limits some government functions that are deemed “non-essential,” temporarily suspends some administrative procedures and creates a waiver process for certain land-use deadlines.

County to apply for FEMA grant

Also on the consent agenda was a resolution authorizing the county to apply for a grant from the Federal Emergency Management Agency to fund an additional 11 full-time-equivalent career fire and rescue personnel in the county along with upgrades to three existing positions.

At a work session earlier in the day, supervisors heard a presentation about the grant – called the Staffing for Adequate Fire and Emergency Response Grant Program (SAFER) - from Fauquier County Fire and Rescue Chief Darren Stevens and Director of Management and Budget Erin Kozanecki.

If the grant is approved, the new positions will allow for four-person, 24/7 staffing in Goldvein. Currently, career staff at Goldvein are on site for 12 hours a day, 7 days a week, Stevens said. The result of the grant application would probably be known by the end of 2020, he added.

The ability to fund 24-hour staffing would improve response times throughout the southern part of the county; he said that projected population growth in the Bealeton area will put a strain on existing fire and rescue resources in southern Fauquier, including Goldvein.

The county has applied successfully twice before, the last time in 2016. Kozanecki explained that the grant “basically slows the impact to local dollars, which allows you to still do the things that you looked at in the proposed budget for FY2021 but with federal funding to backfill for the first three years.”

The federal funding would pay the base salary and benefits for the new staff, but not additional operating costs. The cost to the county would be $292,412 in FY2021, gradually rising to $1 million in FY2024. “It allows us to get through COVID and know what the impacts of that are, as well as reassessment,” Kozanecki said. 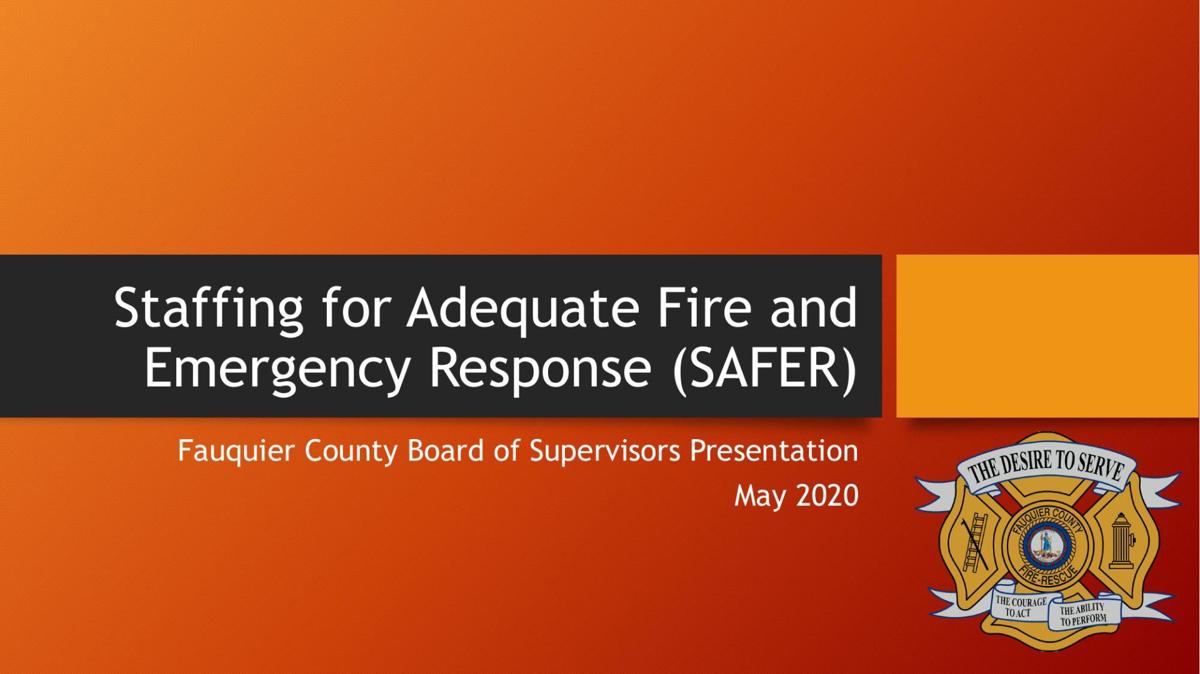