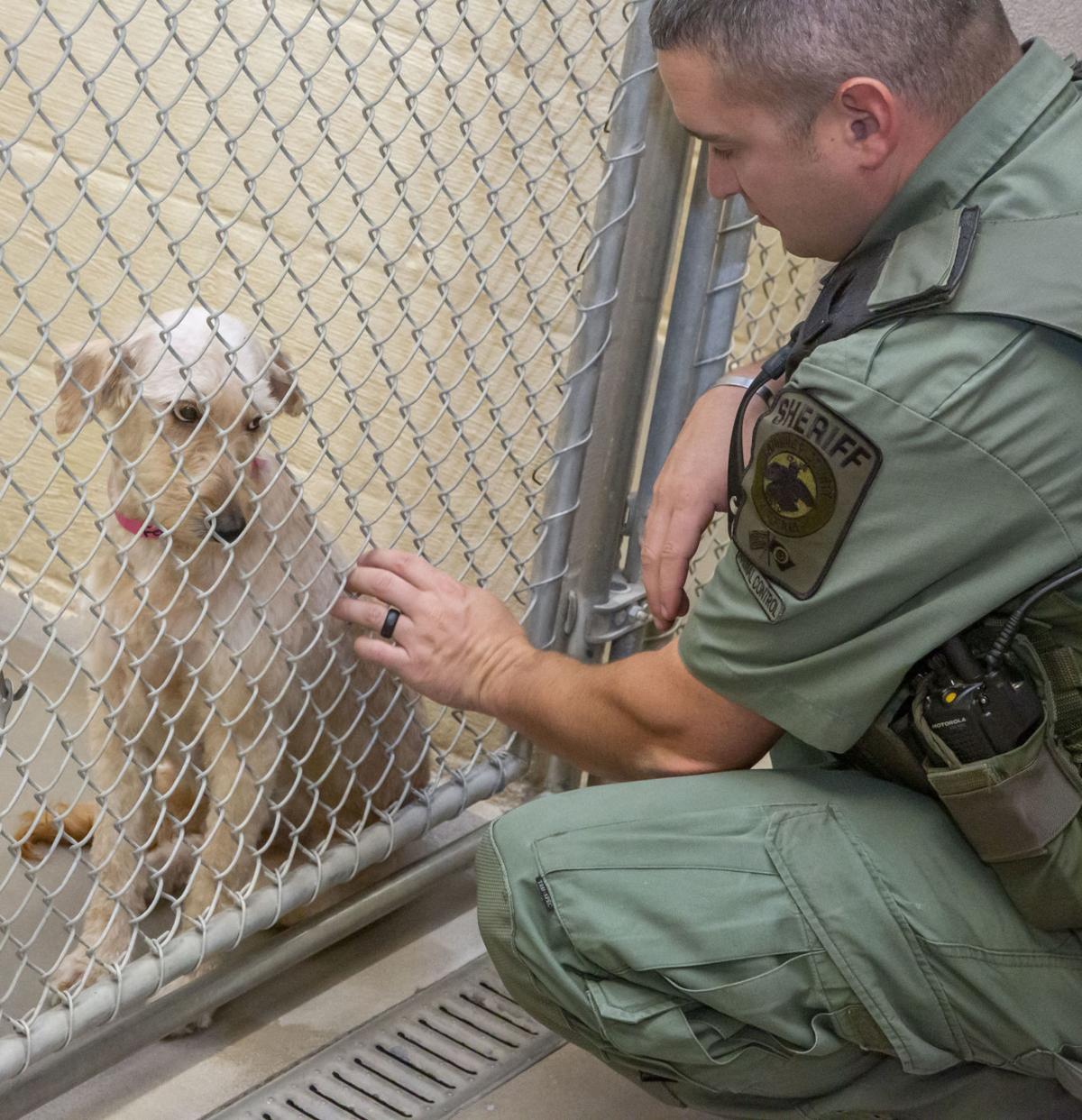 Animal Control Officer Sgt. David Lee checks on one of the dogs taken from a southern Fauquier facility. 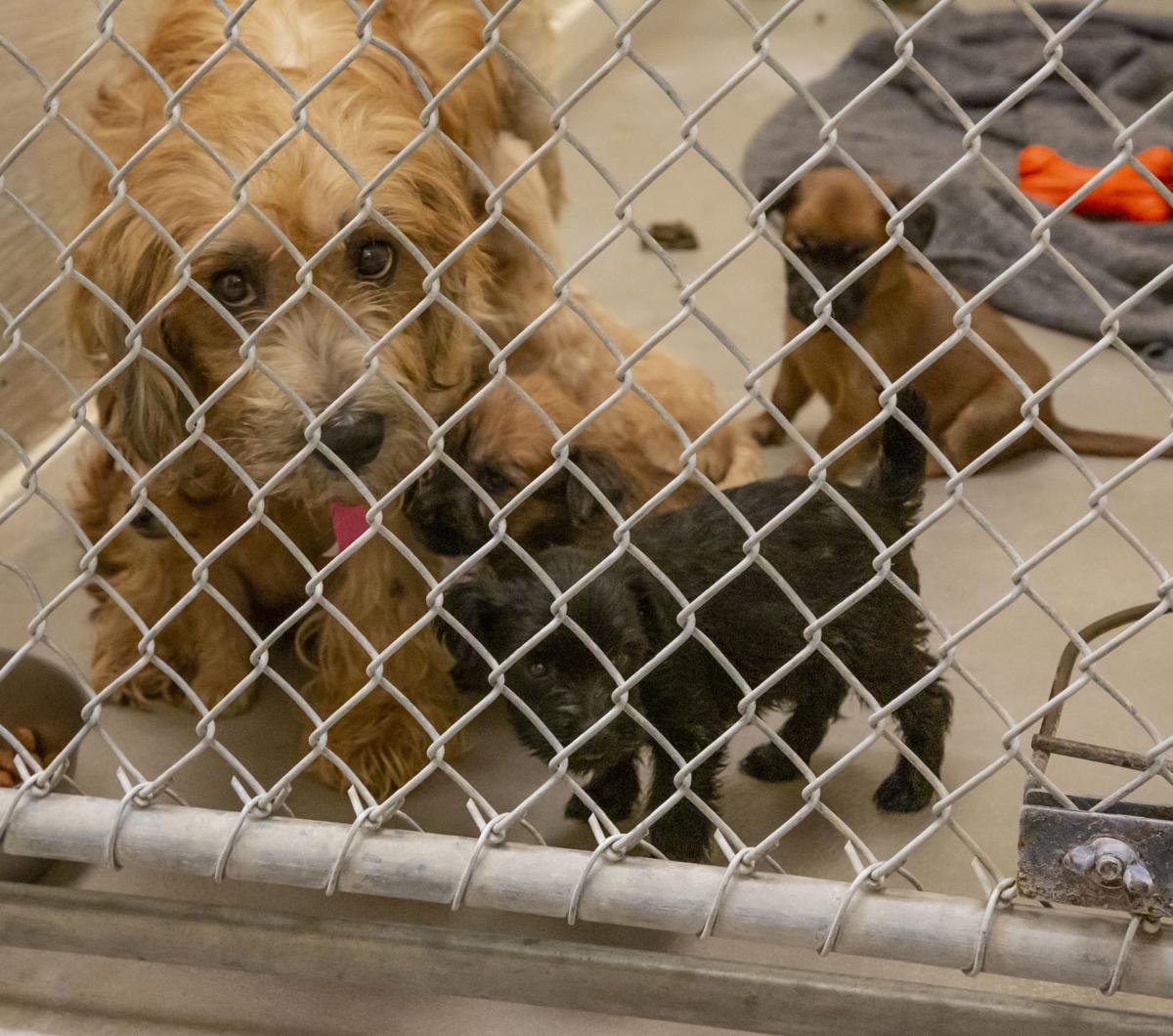 Some of the dogs seized by Fauquier County Animal Control officers were mothers with puppies. 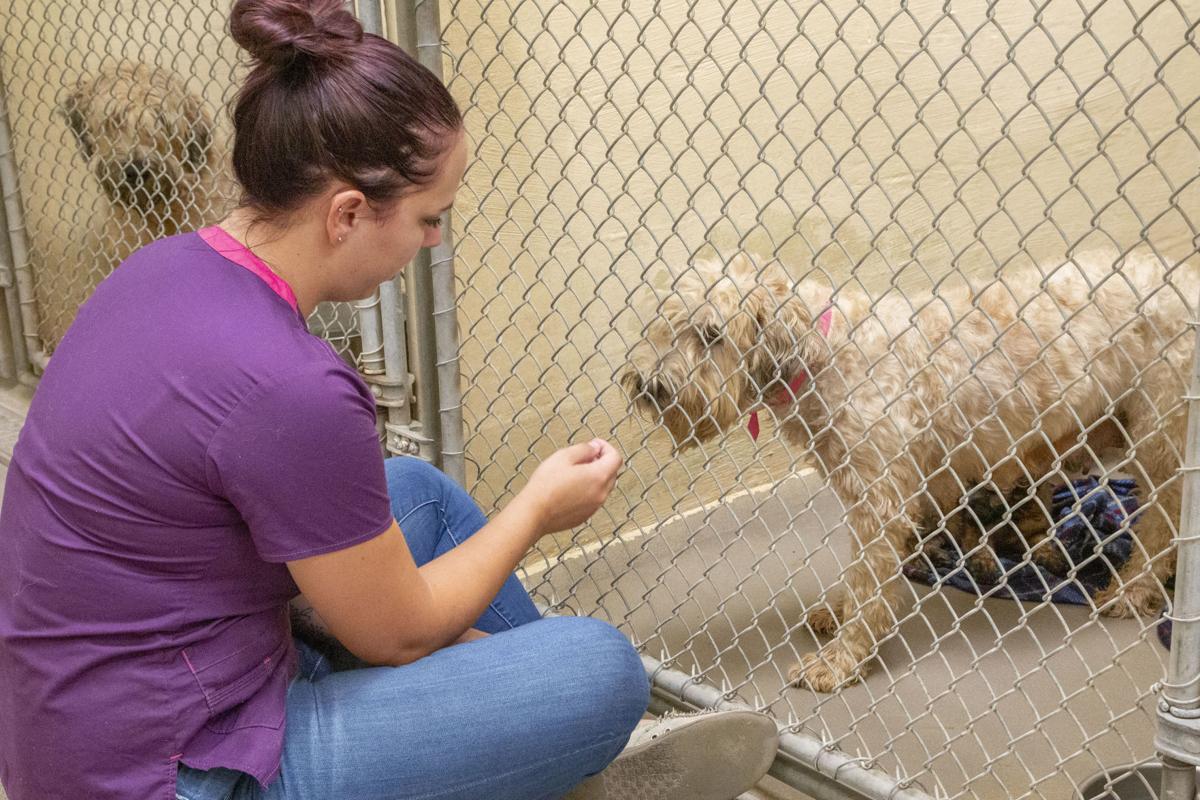 Trained vet tech Hailey Kemp, LVT, of Countryside Animal Hospital in Sterling is helping by washing and grooming some of the dogs. 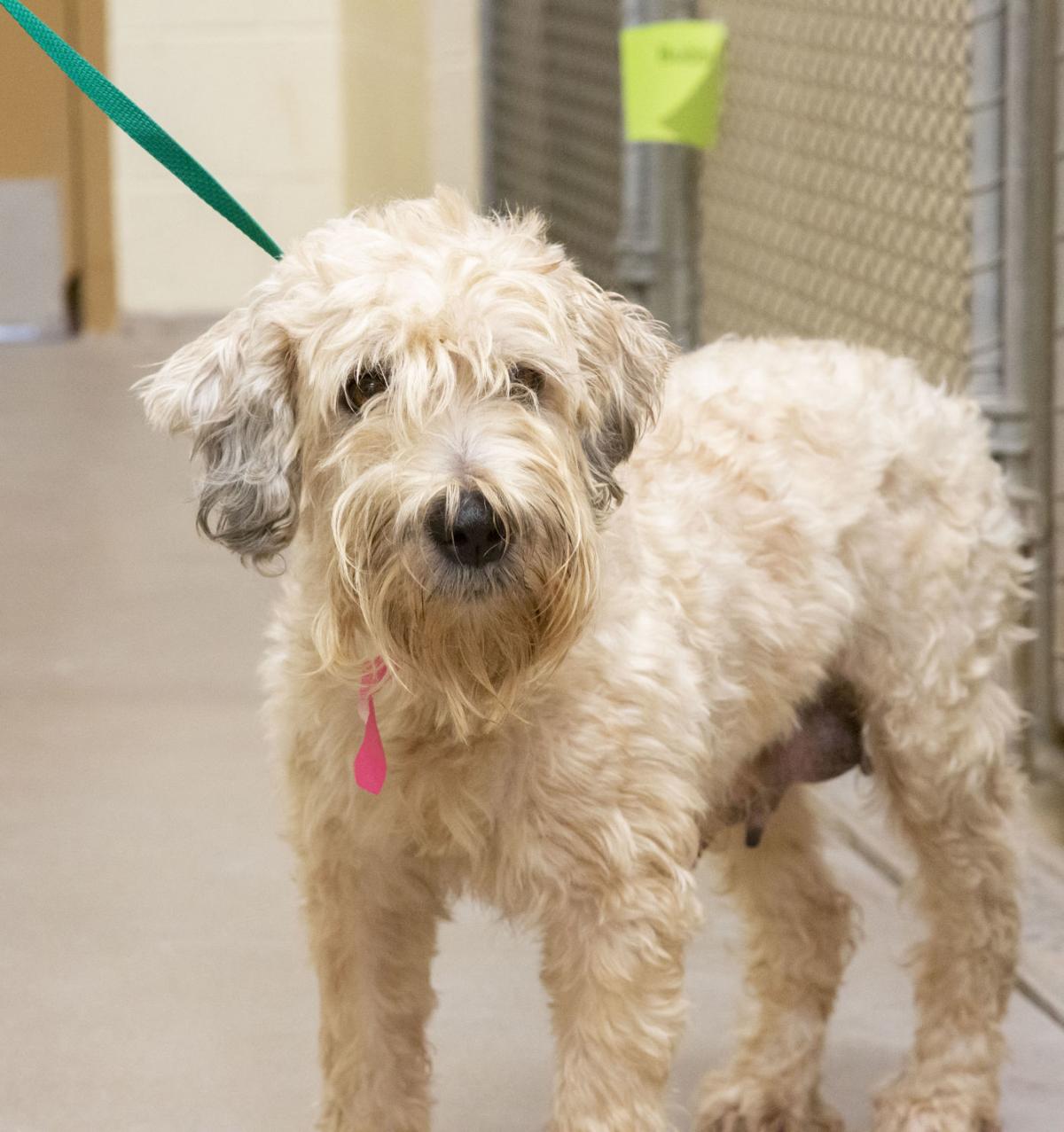 This dog is one of a few who can be walked on a leash. 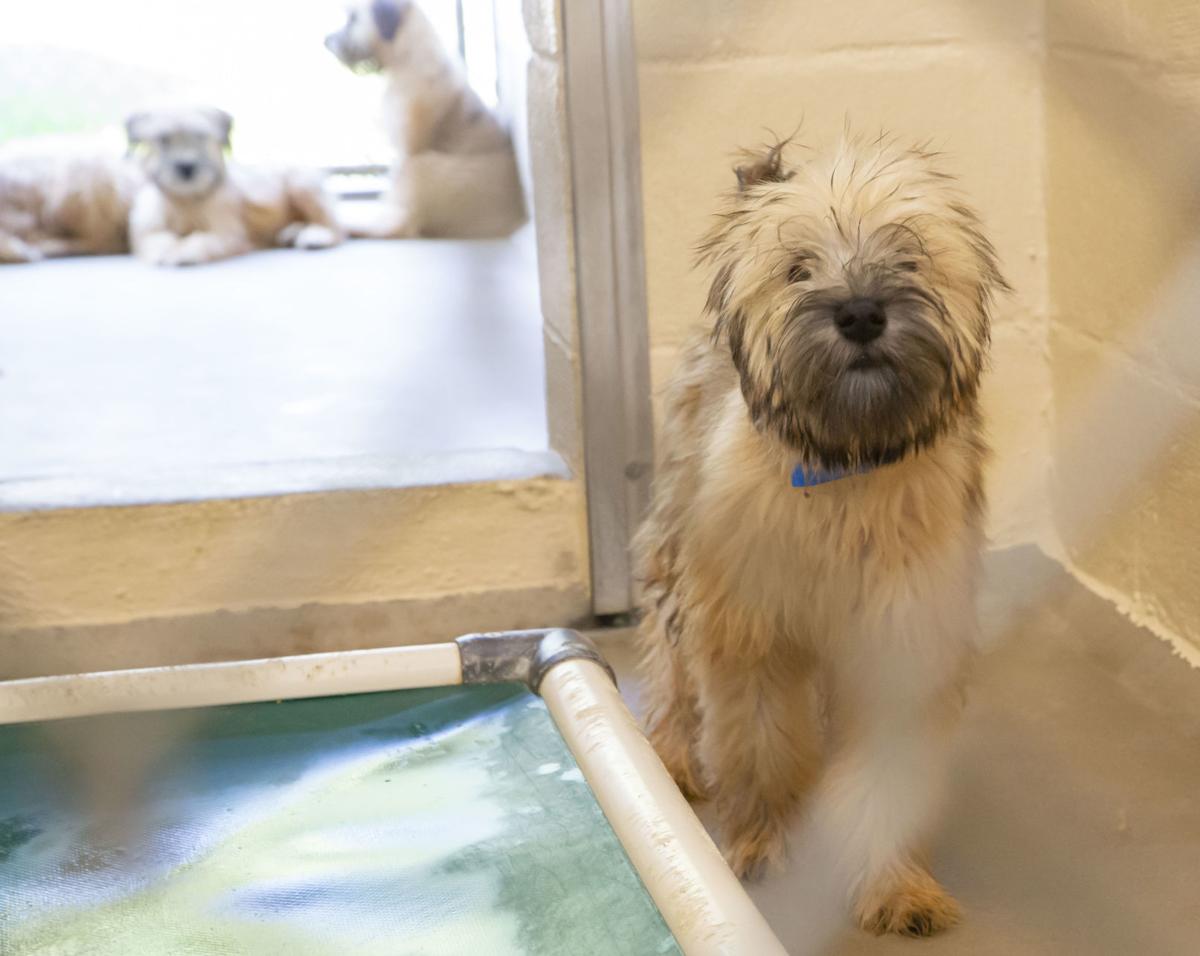 Some young dogs being cared for at the Fauquier SPCA are learning to play for the first time, said Executive Director Devon Settle.

Animal Control Officer Sgt. David Lee checks on one of the dogs taken from a southern Fauquier facility.

Some of the dogs seized by Fauquier County Animal Control officers were mothers with puppies.

Trained vet tech Hailey Kemp, LVT, of Countryside Animal Hospital in Sterling is helping by washing and grooming some of the dogs.

This dog is one of a few who can be walked on a leash.

Some young dogs being cared for at the Fauquier SPCA are learning to play for the first time, said Executive Director Devon Settle.

Dog pens at the Fauquier SPCA are housing dozens of curly-haired dogs that were seized from an alleged puppy mill in southern Fauquier last week. When SPCA Executive Director Devon Settle or SPCA veterinary physician Dr. Elizabeth Krause walk by, some dogs retreat to the back of their pens, trying to get as far away as possible from the footsteps. Others bark aggressively. At least one dog seems extra protective of her tiny puppies; the front of her pen is covered with a blanket to offer her some peace from human activity.

The Casanova animal shelter was overwhelmed on Sept. 11, when Fauquier County Animal Control deputies seized 80 dogs in poor condition from a location on Folly Court, in the Tower Hill Road area of Fauquier County near the Stafford County line. Two owners of the facility, Vernine Barbara Gipstein and Barton Mannes Gipstein, have been charged with animal cruelty, a felony, according to Sgt. James Hartman of the Fauquier County Sheriff’s Office.

Settle said that some of the dogs are Wheaten terriers, but many are mixed breed. She said that some internet research revealed that the Midland facility’s owners were advertising Wheatinis, which Settle described as a “boutique breed,” a wheaten terrier/Cavalier King spaniel mix. An apparent 2013 advertisement on Cannonads.com that lists Vernine Gipstein as a wheatini seller has puppies for sale at $1,350 each.

Settle and her staff have been working non-stop to take care of the sick, injured and malnourished dogs. Two dogs have already had emergency surgery. “They couldn’t wait,” said Settle.

At least one is pregnant. “We are X-raying all the female dogs. If any of them are pregnant, they will get a little more attention. It’s hard for them to bring puppies to term when they are in this condition.”

Settle and her staff have been working overtime to triage the dogs and give them the care they need.

She said the response from the community has been phenomenal. One garage-sized area is filled with donated supplies from the SPCA wish list (posted on Facebook). Amazon boxes are piled high, as are cases of dog food. “We keep having to run to the post office with a truck to pick things up. The response is overwhelming the post office.”

Settle said that as grateful as she is for the supplies, people could maybe hold off for a while. The dogs, part of a criminal investigation, are going to be held at the SPCA while the criminal case is decided, and supplies will be appreciated in the coming months as well.

“None of the dogs is healthy enough to be adopted right now; they need medical care and grooming,” Settle pointed out, and added that they couldn’t be released to families anyway. “They are evidence.”

Seizure paperwork will have to work its way through the courts. “For now,” said Settle, “these animals need to get healthy.”

She said that the dogs need varying levels of care, from basic needs to surgery. All the dogs were covered in fleas, with filthy and matted fur, she said.

The psychological damage to the dogs is also being assessed, said Settle. “When she and Klaus first started working with the dogs, “they were frenzied, barking, growling, we couldn’t get our hands on them. For some of them, it took us two days to be able to touch them ... Many of the dogs have had no socialization. Very few would be able to walk on a leash.”

She said that even if the SPCA had legal authority to adopt out the dogs, “These dogs are not ready. We wouldn’t send a dog home with a family until it could walk on a leash out to the car.”

Settle admitted that she cried the first time she saw some of the puppies playing together. “Some of them were in spaces so small they couldn’t lay down in their crates. They need to learn how to be dogs. It’s going to take some time.”

Fauquier County Animal Control officer Sgt. David Lee, who with Deputy Marisa Efaw seized the dogs from the alleged puppy mill, said that Fauquier County is lucky to have such a great facility. “A lot of shelters wouldn’t be able to handle this. If it wasn’t for Devon and her staff, we would have had to ship some of these dogs out to other places.”

An anonymous tip received by police alleged a Midland facility was breeding and dealing in Wheaten Terriers. The tip was received from someone who was shown a dog to purchase. The person alleged the dog was “noticeably not well cared for and had fleas,” reported Hartman last week.

Animal control deputies talked to Vernine Barbara Gipstein, but they said that Gipstein would not grant full access to the property so that deputies could determine the welfare of the dogs, said Hartman. The deputies’ observations led them to believe the dogs were not being properly cared for, he said. The investigation also determined that the facility was not properly licensed.

A search warrant was executed on Wednesday afternoon, Sept 11. Hartman said deputies discovered many dogs in poor condition who were being held in extremely unsanitary conditions; most had no access to water. Many of the terriers were in poor health with matted, tangled fur. One terrier was found to have an exposed femur on one leg.

Vernine Gipstein, 69, of Midland, has been charged with one count of felony animal cruelty and misdemeanor possession of marijuana. She was released on a $3,000 unsecured bond.

Barton Gipstein, 75, of Midland, is also charged with one count of felony animal cruelty. He was released on a $2,500 unsecured bond.

Hartman said that the investigation is continuing and “it is anticipated that further criminal charges may be forthcoming.”

Settle says she is not sure when she and her staff will be able to return to normal. “My staff, I have approved overtime for them all, but I can’t get them to go home. We want to save them all. This is what we are here for.”

On Nov. 25, a grand jury will consider a charge of torturing an animal causing death against Barton and Vernine Gipstein of Midland, in connec…

Barton and  Vernine  Gipstein,  of Midland, pleaded no contest in Fauquier County Circuit Court on Jan. 14 to one felony count each of torturi…

I have adopted several cats over the years from this great facility and we are lucky to have such a caring place in our community!!