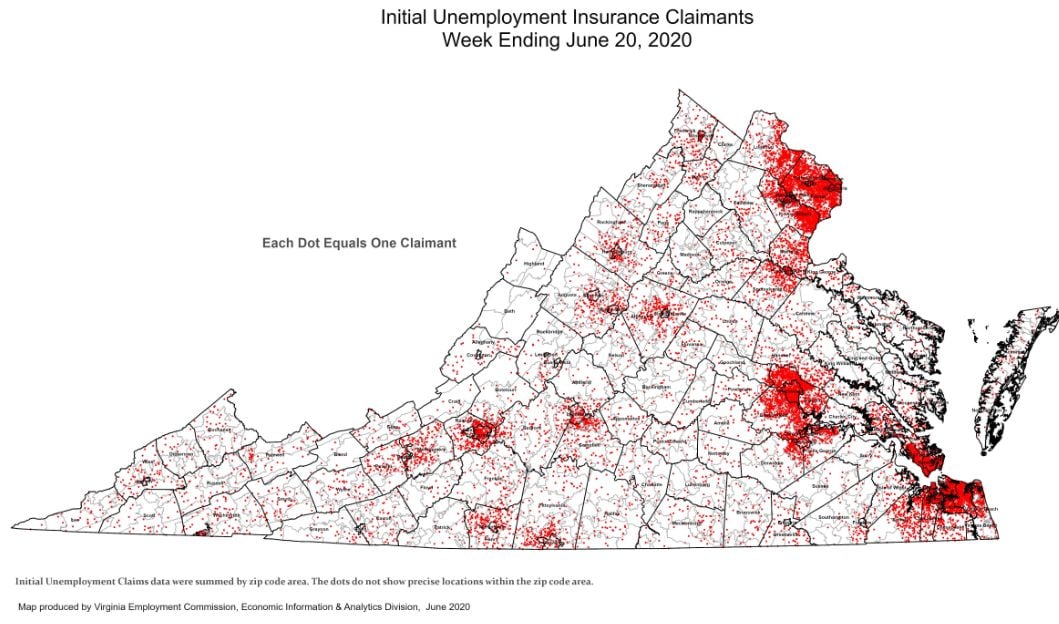 A map shows the initial claims filed in Virginia during the week ending June 20 by zip code.

The national seasonally adjusted unemployment rate by month, 1948 to present

As a percentage of the total labor force, the number of claims for unemployment insurance benefits by residents of Fauquier County continues to be much less than the state and national averages.

According to employment data released Thursday by the Virginia Employment Commission and the U.S. Bureau of Labor Statistics for the filing week ending June 20, 19.4 million workers across the country filed either an initial or continued unemployment insurance claim during that week, including 400,872 in Virginia and 2,156 in Fauquier County.

The official unemployment rates – the BLS uses data obtained from a representative survey of workers, not just the number of unemployment claims, to calculate this number – lag far behind real time, but those rates have followed a similar pattern, with Virginia faring better than the national average, and Fauquier County better still.

Despite the signs of recovery, the number of unemployed individuals continues to be very elevated in an historical context. For instance, the 375,579 continued claims filed in Virginia last week is more 19 times greater than the claims filed in the comparable week in 2019. The national unemployment rates for April and May were both far higher than any rate recorded since the BLS began recording that statistic in 1948.