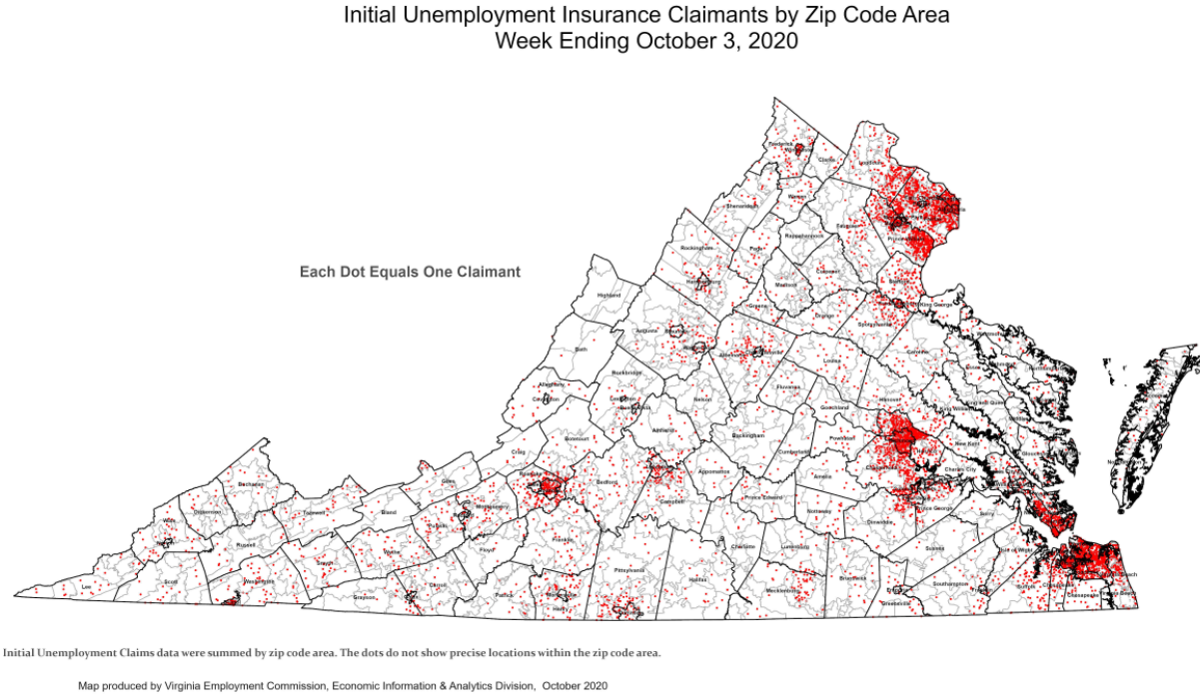 Though official employment statistics at the state and local level will not be released by the bureau until later this month, data trends throughout the pandemic show that Virginia has consistently experienced lower levels of unemployment than the country as a whole, and job losses in Fauquier County have occurred at an even lower rate.

The federal unemployment rate is calculated by using results from the national survey the bureau conducts each month of workers and businesses. Although this measure is arguably the most precise – it takes into account seasonal fluctuations in the labor market, for instance – it does not give a real time picture of the employment situation, since results are released weeks after the survey was conducted.

A less precise, but much timelier, way of measuring unemployment is by the number of claims for unemployment insurance benefits filed in a particular place during a particular week. These numbers are announced by the Virginia Employment Commission each week, only a few days after the filing period ends, giving a picture of unemployment trends in almost real time.

Though separate statistics, federal unemployment rates and weekly claims data – as measured as a percentage of the labor force – have mostly mirrored each other throughout the pandemic, with Fauquier County unemployment levels far below the state and national averages. (See chart below.)

For instance, the official unemployment rate in Virginia peaked at 11.2% in April, 3.6% less than the national average. In Fauquier County, unemployment peaked at 8.7% during the same month, a full 6% less than for the country as a whole.

Comparing the number of weekly claims for unemployment insurance benefits reveals a similar trend, with Fauquier County experiencing a much lower rate of job loss than the state average. The number of unemployment claims filed last week is the lowest weekly figure since March.

During the latest filing week, which ended Oct. 3, 54 Fauquier County residents filed an initial claim for unemployment benefits – these claims represent a person who is filing for the first time after being laid off – and 765 residents filed a continued claim, representing workers who were laid off previously and remain unemployed.

The combined total of 819 claims last week accounts for 2.2% of the county’s labor force, as measured in March, compared to the statewide percentage of 3.7%.

Even in Fauquier County, where the unemployment crisis has not been as severe as in other areas, the number of unemployment claims remains at levels much greater than before the pandemic.

Just 123 county residents filed a claim for unemployment benefits during the week ending March 14, before mass layoffs began. That number is only 15% of 819 claims filed last week. Put another way, the number of unemployed people is still about six times its pre-pandemic level. However, the situation has improved greatly since early May, when weekly unemployment filings ballooned to 22 times more than the mid-March level.