An allocation of $1.2 million from funds received under the federal CARES Act, along with a $750,000 grant from the PATH Foundation, may enable Fauquier County’s wireless broadband network to expand beyond the 15 sites currently in operation (or planned) under a public-private initiative meant to expand access to fast internet connections in rural areas of the county.

Supervisor Rick Gerhardt (Cedar Run) indicated that the communications tower adjacent to the CubeSmart storage facility in Amissville is one of the possible locations being explored but that no plan is set in stone. “What people have a hard time understanding is that we’re dealing with existing assets,” he added. That is, broadcast equipment is being mounted on towers or other high points that already exist, which can be difficult to find in remote areas.

County Administrator Paul McCulla confirmed Monday that the Amissville tower was being considered. The county is also “exploring options” in the Catlett area, he added, “but we have not settled on any locations.”

Representatives of Data Stream Mobile Technologies, the firm contracted by the county last year to expand internet access in the county, did not respond to multiple requests for comment.

Years of efforts culminate during pandemic

The debate over the best way to expand access to Internet connections in the county’s large rural areas goes back years, and tangible efforts by the county to address the issues began in 2017 with funding for the construction of new communications towers.

Then, no one could have predicted a global pandemic would make the push to expand access all the more urgent, as many adults have been thrust into working from home and the county’s public schools look poised to begin the academic year on Aug. 24 using, at least in part, a virtual instruction model.

In September 2019, members of the Fauquier County Board of Supervisors approved a multi-million-dollar incentive program with Data Stream; the company would install signal-broadcast equipment on pre-existing towers, county-owned assets and water towers to reach rural areas with few or no other broadband options.

A Data Stream signal is currently being broadcast for subscribers from eight points,  located (from north to south) on a Pignut Mountain tower called Scotts Tower; in Vint Hill; on the Warrenton water tower; near the Fauquier County landfill on Lovers Lane and in Casanova, Calverton, Ensors Shop and Goldvein. Each tower’s signal should reach properties within a 5-mile radius; the signal may extend up to seven miles in some conditions, according to the county’s geographic information system website.

Seven additional locations are in the works and are expected to be operational by September, Gerhardt said. These broadcast points will be located on Blue Mountain on the Clarke County border; in Marshall and Hume; outside Warrenton on Bear Wallow Road; on the Bealeton water tank; at Culpeper Regional Airport and in Sumerduck.

In exchange, Data Stream receives $235,000 for each site put into operation in addition to reimbursements for the rent the company pays for the space on towers and $10,000 per month to fund staff members to support the Fauquier County project. Residents of Fauquier County pay a discounted monthly rate for the service and the county receives 20% of revenue from those subscriber fees.

To date, Fauquier County has paid Data Stream $2.45 million as part of the initiative, part of about $3.9 million supervisors have approved for the broadband expansion program, according to Deputy County Administrator Erin Kozanecki. Of the total funding, the PATH Foundation contributed $460,000 before it announced an additional $750,000 grant announced this month. The PATH contributions, and more recently federal CARES Act funding, reduce the amount of cash expenditures required of the county, Kozanecki said.

The fate of the county’s broadband initiative lies completely with Data Stream, at least for now.

Both Gerhardt and Kozanecki said that Data Stream is doing the best it can under the circumstances but acknowledged growing pains as more towers are added in an effort to connect more county residents.

“It’s not going to be perfect at first,” Gerhardt said of the addition of the broadcast points already planned to go into operation this summer.

“They’re moving along as quickly as possible,” Kozanecki said of Data Stream in a separate interview.

As the Data Stream network expands, however, some customers say their internet service has become very unreliable.

In 2018, Dee Dee Kanney, of Casanova, was one of the first customers whose home was connected to the broadband signal broadcast from a 145-foot tower on Casanova Road. The tower is “two fields away” from Kanney’s home.

The service, then provided by Omnipoint Technologies – a company that has since been absorbed by Data Stream – “is such a boon,” she told the Fauquier Times in July 2019. Speaking last week, she was far less enthusiastic. “What a difference a year makes,” she said. At first, she emphasized, the internet service was reliable and fast. “Then,” she sighed, “they put up other towers.”

She said that each time a new tower is added to Data Stream’s network, the service at her house gets slower and more unreliable. “It’s been absolutely horrendous. We haven’t had service we can count on at all.” She added that “it seems like it goes down almost on the hour now,” a reality punctuated each time she tries to use her Alexa smart speaker and it responds, “I am having trouble connecting to the Internet.”

During the pandemic she has needed to work from home. “I was driving to different places just to try to pick up a [cell] signal.”

She emphasized repeatedly that she has nothing but good things to say about her interactions with the company’s executives and support staff, interactions that have become common as her service constantly goes down. “The service techs have done such a great job,” she said.

Kanney has looked into other options, but there are no good choices. “It’s the only game in town,” she said of Data Stream. “and that’s what makes it so frustrating.”

Jennifer Coates, also of Casanova, told a similar story of her experience since she became a Data Stream customer in January. When the service works, she said, she can stream video and perform other data-intensive tasks. “For the most part, it’s been a positive experience. When it’s working, we love it.”

But it doesn’t always work. “It does go out, sometimes for days, even a week at a time,” she said. She pays a separate monthly fee for a Verizon mobile hotspot to use as a backup when her Data Stream service is down. “There have been a couple times we’ve had to use [the Verizon hotspot] during the pandemic,” she said. Fortunately, she added, neither she nor her husband have to work from home. “Data Stream is doing the best they can,” she said, “but the customer service leaves a lot to be desired.”

Another Casanova resident, Charlene Moore, was one of the first to connect to the tower there in 2018. “The first year or so, it was good,” she said of her experience. “This last year, it’s been terrible, terrible, terrible.” When she spoke to the Fauquier Times Friday, her service had been down for a week.

Her grandson, a student at Lord Fairfax Community College, lives with her and had to travel to find a public Wi-Fi hotspot after their Data Stream service went down during his finals week this spring. Because of the frequent outages, she pays for extra data on her grandson’s phone so he can use it as a hotspot when Data Stream is down. “I’m paying twice,” she said, “just so my grandson can do homework at night.”

Moore said her experience with the company’s support staff has been generally positive, but during service disruptions, “they always blame it on something else.”

Though Data Stream representatives did not respond to requests for comment for this story, a June 21 email to Data Stream customers from Charles Thomas, the company’s director of operations, hinted at service interruptions described by some customers.

“We … want to thank you for your extreme patience during our network upgrade last week,” the email said. “An especial thanks to our customers receiving service from the Calverton tower that lost its microwave service to the tower on consecutive days … Many of you experienced multiple downtimes as the system synced.”

The email promised “high up-time consistent service” going forward but alluded to deficiencies in providing customer service. “We are listening, and we get it. Our customer service area needs additional attention, especially in cases like last week.”

A July 27 Facebook post from Data Stream inform customers that the broadcast equipment at Ensors Shop, Goldvein and Casanova would be “upgraded” over the next 30 days. “We are confident that once completed this work will significantly reduce the possibility of a service interruption and improve our customers internet experience in these areas,” the post said. 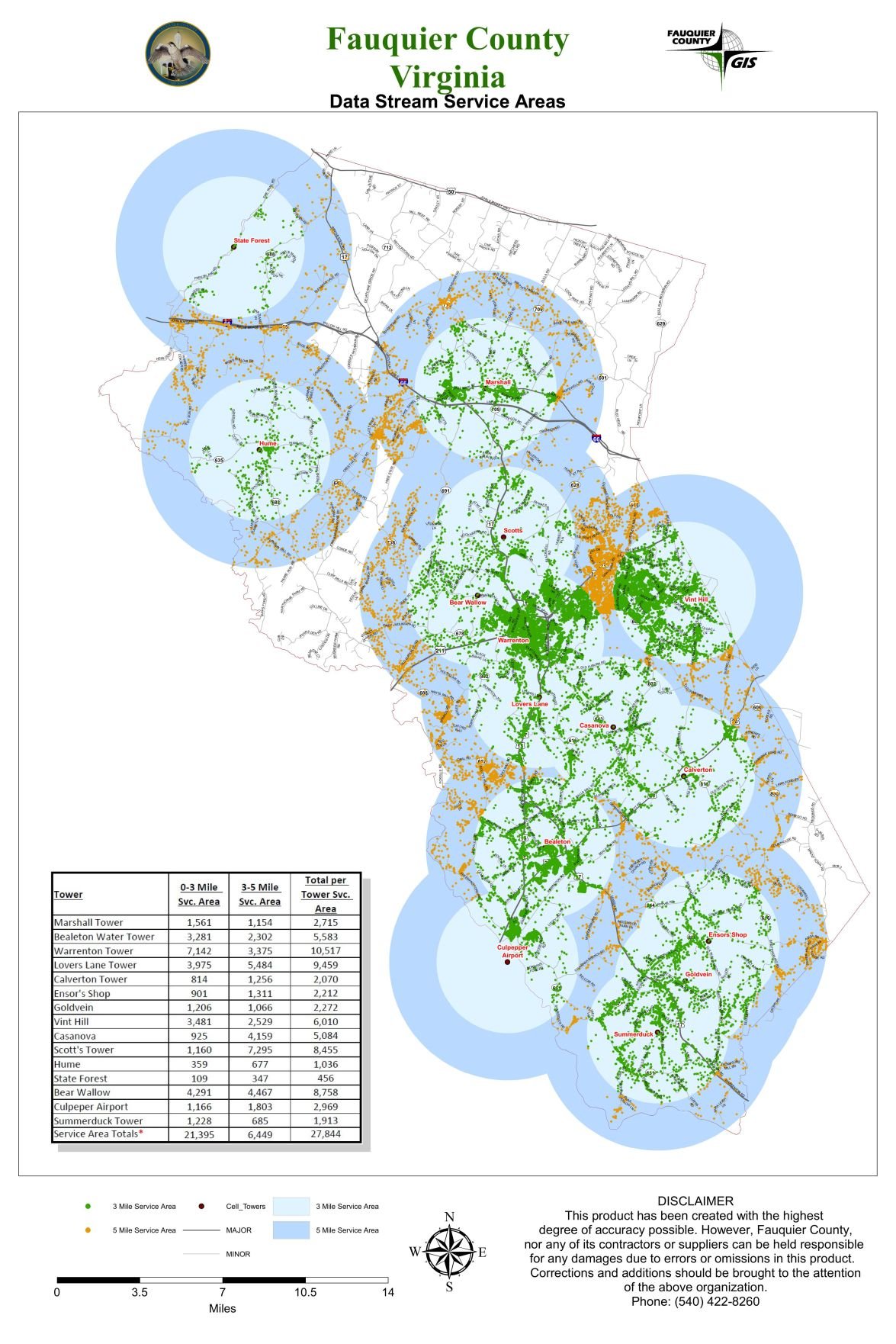 Fauquier County will receive a second allotment of $5.27 million from the Coronavirus Relief Fund, which was created by Congress in March as p…

Gerhardt: Broadband will be available to all in Fauquier within three years

The misery of poor internet connections has vexed homeowners, farmers and other businesses in large, rural swaths of Fauquier for years. The p…