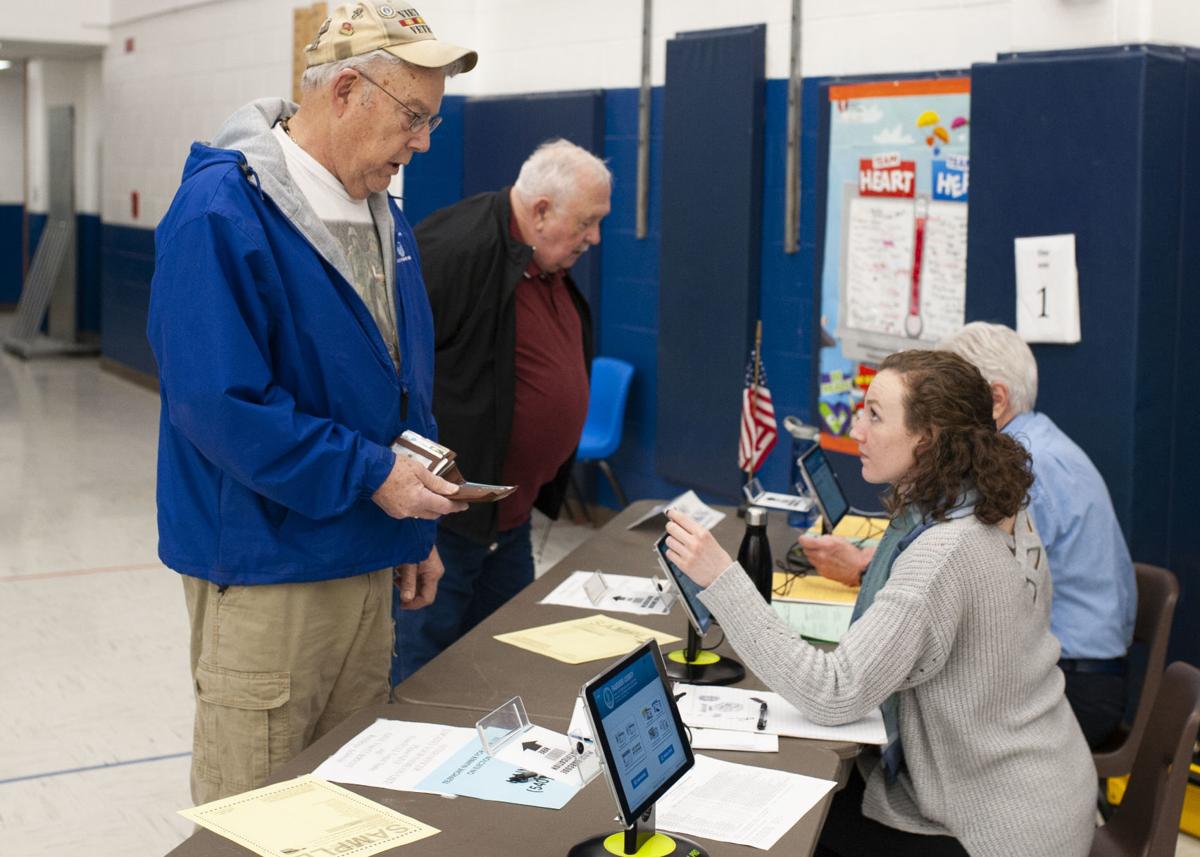 Voters check in at the polling place in Bradley Elementary School’s gymnasium during the March 3 Democratic presidential primary. 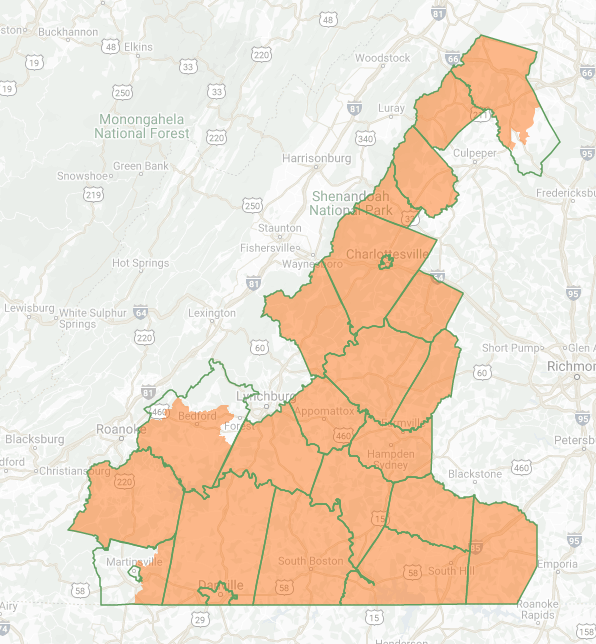 A map shows the boundaries of the 5th U.S. Congressional District with county and city borders. 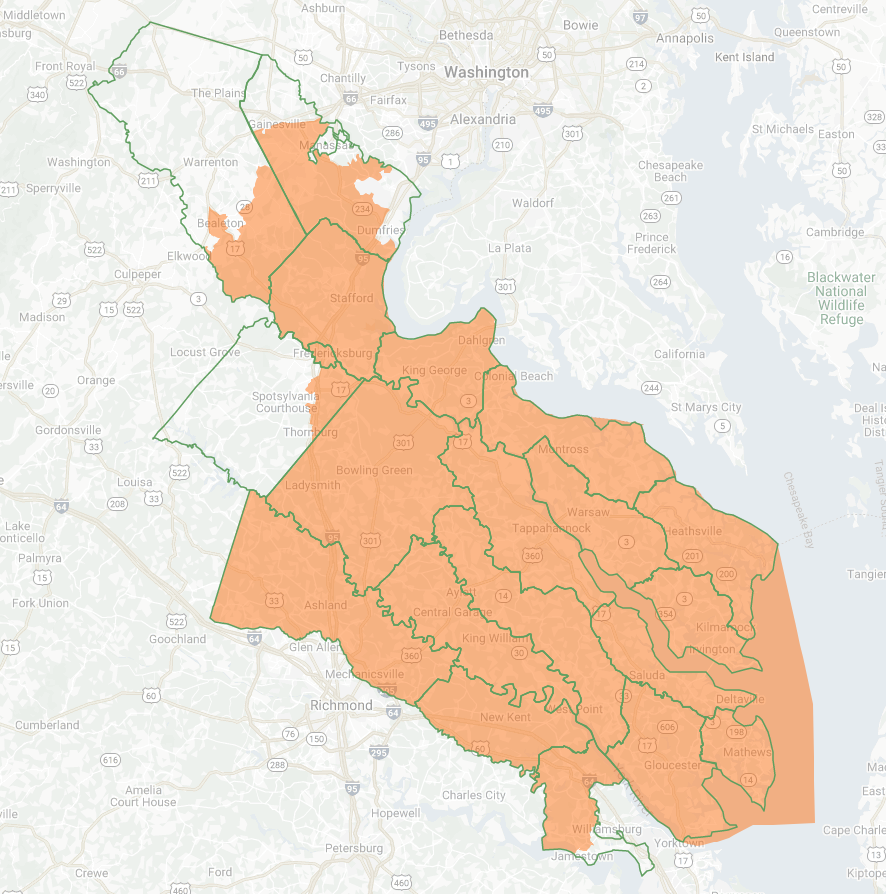 A map shows the boundaries of the 1st U.S. Congressional District with county and city borders.

Polling places in Fauquier County will be open on Tuesday, June 23 for primary elections to choose party nominees for the U.S. Congress and U.S. Senate. Polls will be open from 6 a.m. to 7 p.m.

Registrar Alex Ables emphasized in an email that the registrar’s office will be open on Friday, June 19, even as other county offices are closed for the recently announced Juneteenth state holiday. “This office cannot close on such short notice in the last days immediately preceding a scheduled election,” Ables said.

Any Fauquier voter may choose to participate in the statewide primary election to choose the Republican Party's nominee for U.S. Senate.

Although each voter must state to an elections officer in which party's primary they wish to cast a ballot, doing so does not mean that voter is registered with that party, Ables emphasized.

Click here to check your voter registration status, confirm which district you live  in, and locate your polling place.

The Democratic Party will not hold a Senate primary. Sen. Mark Warner, who was first elected to the seat in 2008, is unopposed for his party’s nomination.

In the 5th Congressional District, which includes most of Fauquier County, four candidates will be on the ballot in the democratic primary: – RD Huffstetler, of Charlottesville; John Lesinski, of Washington, Va.; Claire Russo, of Earlysville, and Cameron Webb, of Charlottesville.

The Republican Party nominee for the 5th District is Bob Good, of Campbell County; he defeated incumbent Rep. Denver Riggleman at a June 13 convention.

The 1st Congressional District, which includes parts of southern Fauquier County, is currently represented by Republican Rob Wittman, who was not opposed for his party’s nomination this year.

Qasim Rashid, of Stafford, and Vangie Williams, of King George, will be on the ballot on Tuesday for the Democratic Party primary. Williams was the democratic nominee for the seat in 2018, receiving 45% of the vote in the general election.

There are 52,078 registered voters in Fauquier County. As of Wednesday morning, 2,003 of those voters have applied for an absentee ballot for one of the June 23 primaries, with 905 of those ballots having been cast so far.

"Traditionally, primary elections are a low absentee turnout affair," Ables explained. The spike in applications this year, he said, is attributable to the novel coronavirus pandemic and the move by the Virginia elections commissioner to authorize any voter to vote absentee by using reason "2A - my disability or illness."

Ables said that he anticipates this trend will continue, especially after laws expanding early voting that were passed this year by the Virginia General Assembly go into effect on July 1.

"Come July 1, and with it the advent of early no-excuse absentee voting by mail and in-person, these numbers are going to explode, seeing as Virginia will have it in place for a full 45 days before every election," he said. More than 60% of votes cast in the Warrenton, Remington and The Plains town elections last month were absentee.

"Virginia is implementing an even more expansive early voting process so there is no reason to believe that Virginia will not see absentee voting figures the same as, or even greater than, what North Carolina experienced in November 2016," Ables said.

Voters around Virginia went to the polls Tuesday to choose party nominees for U.S. Congress. A total of 6,905 Fauquier County residents, 13% o…