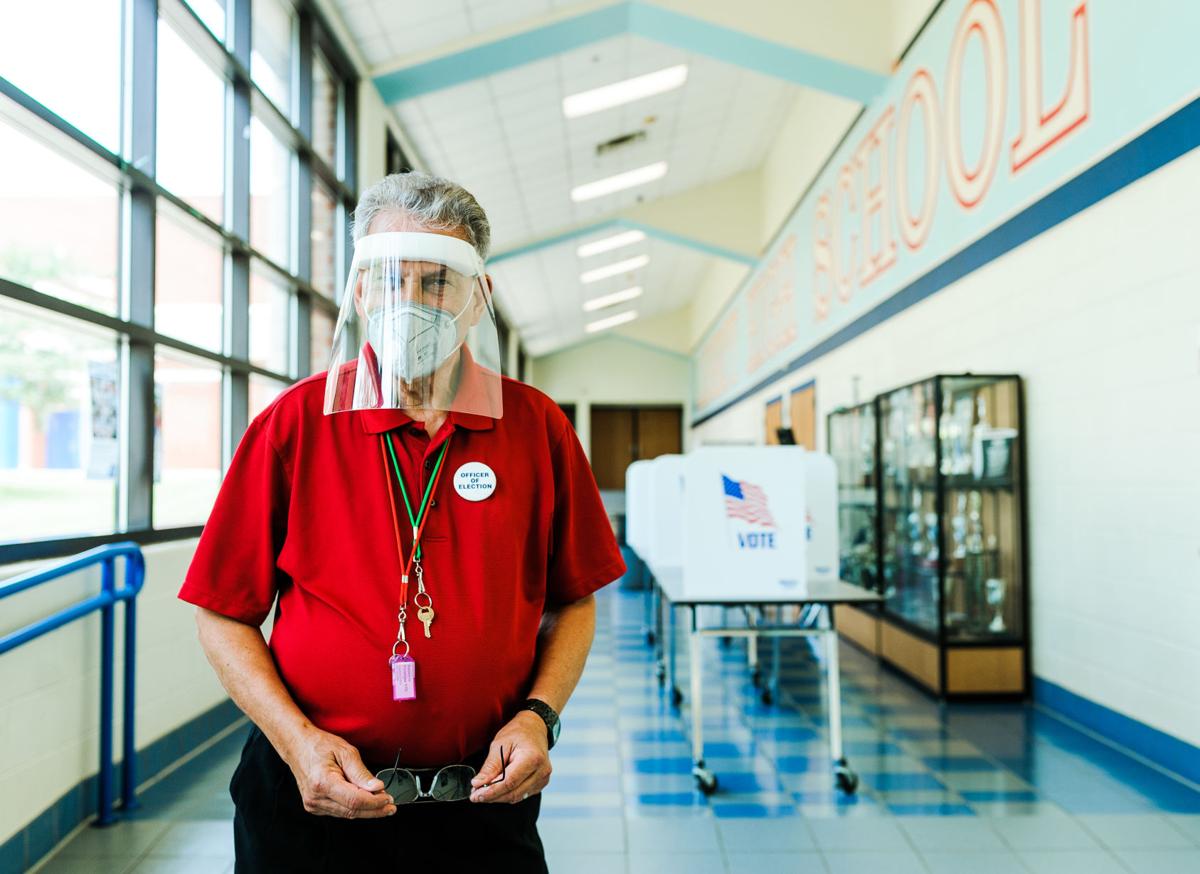 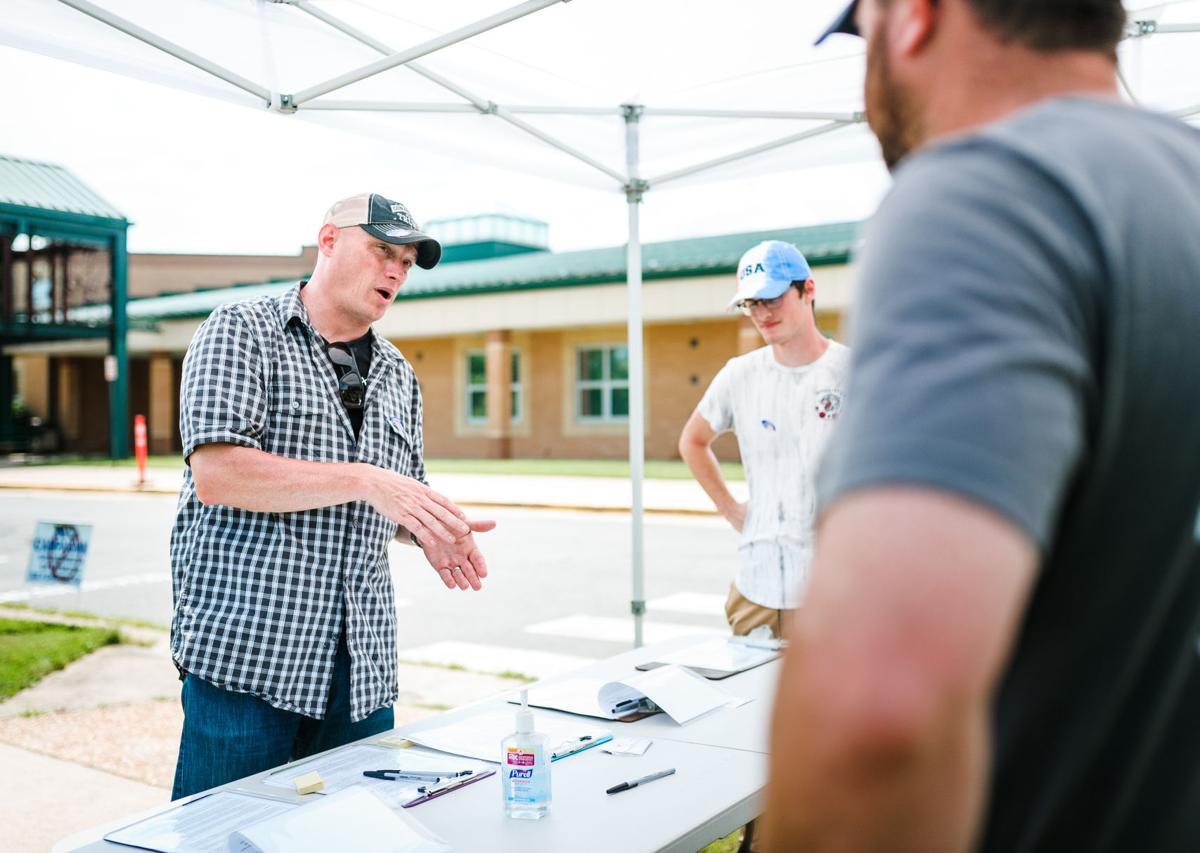 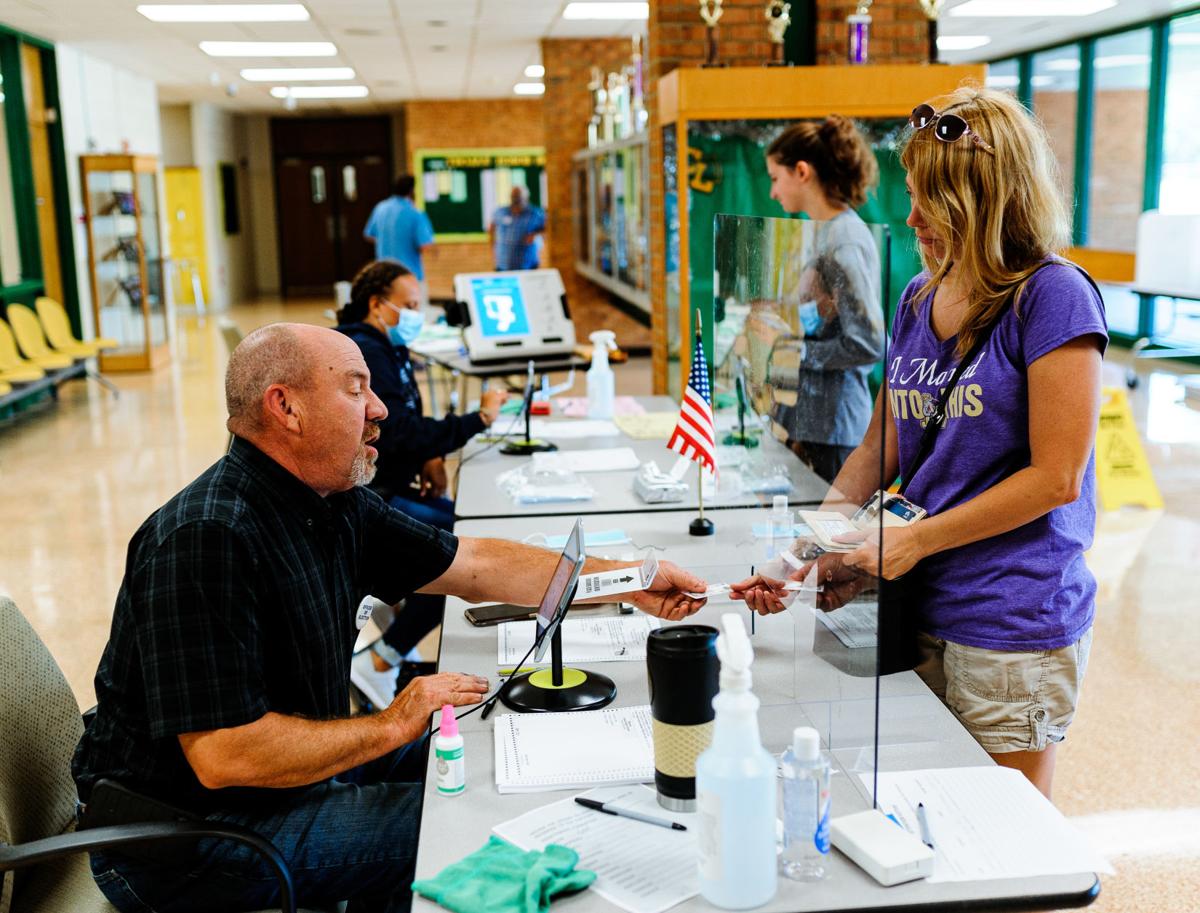 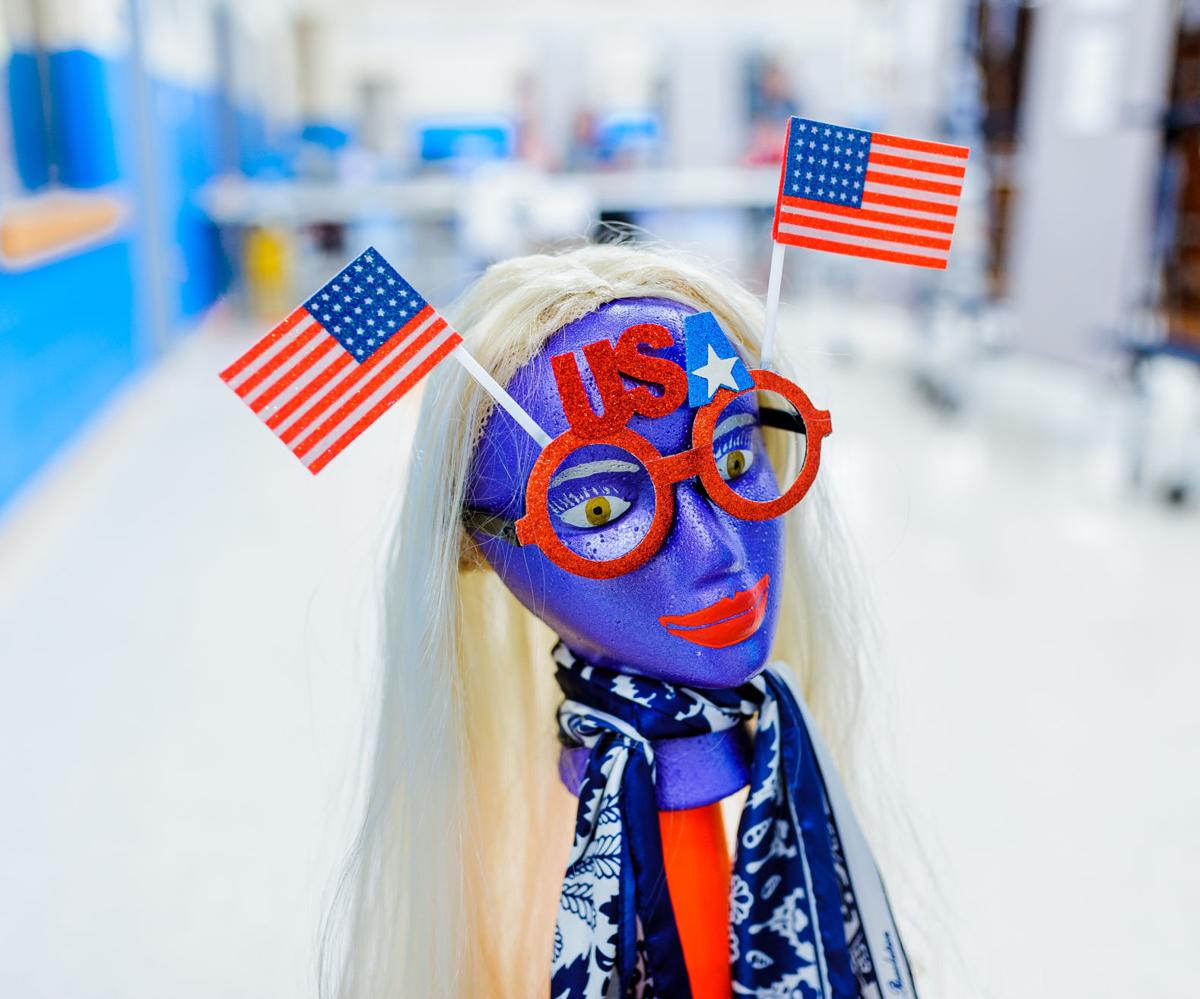 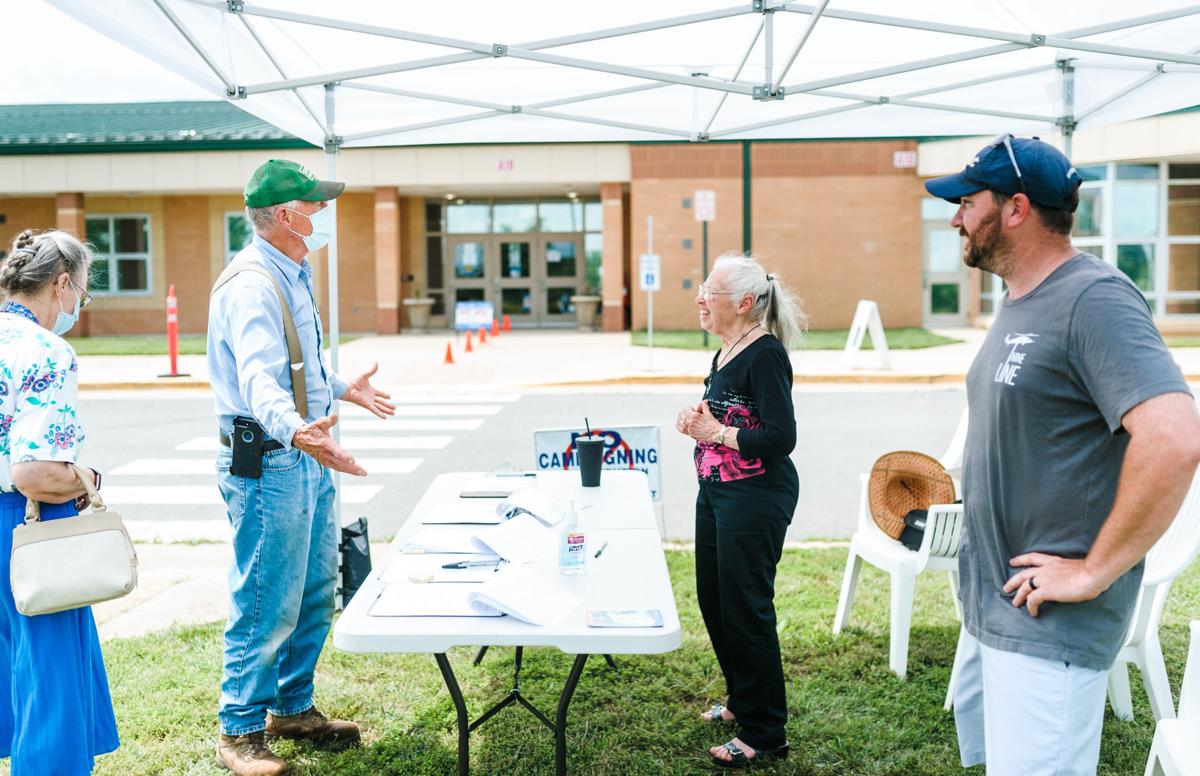 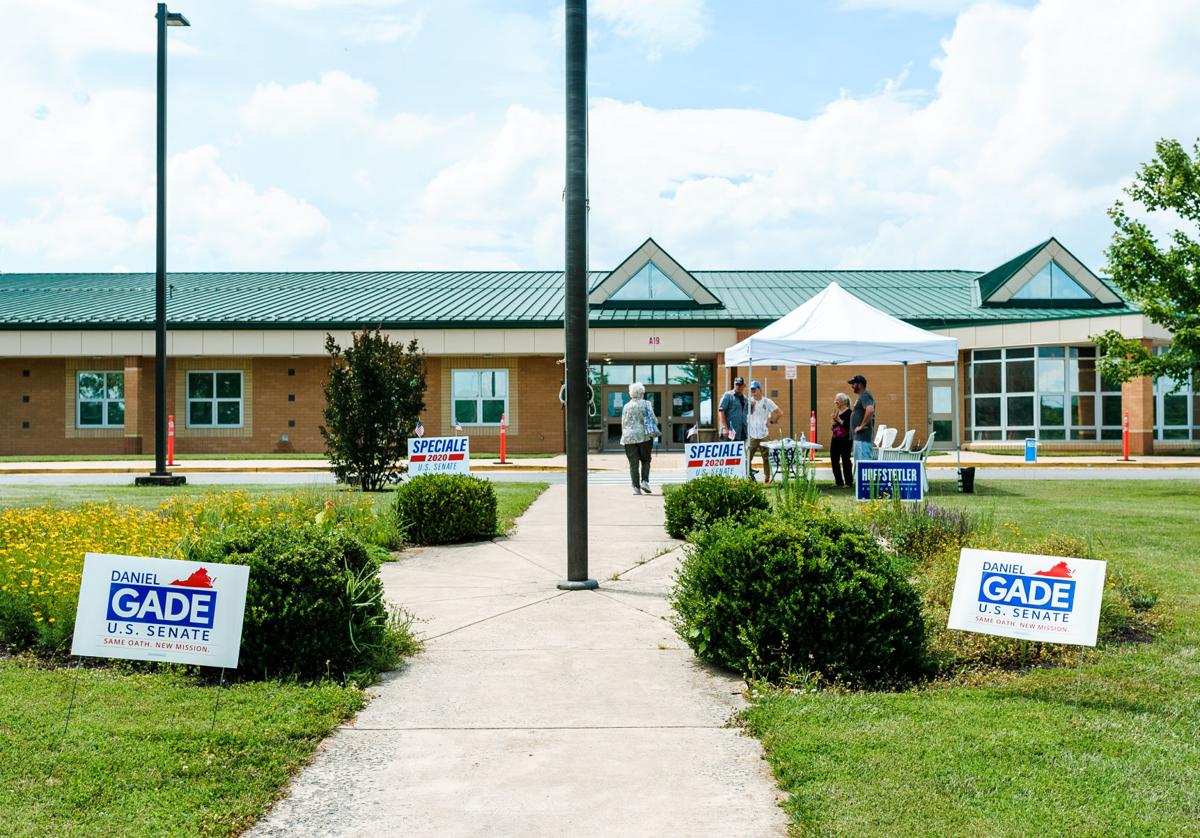 Signs promoting primary candidates are arrayed along the sidewalk leading to the polling place at Auburn Middle School. 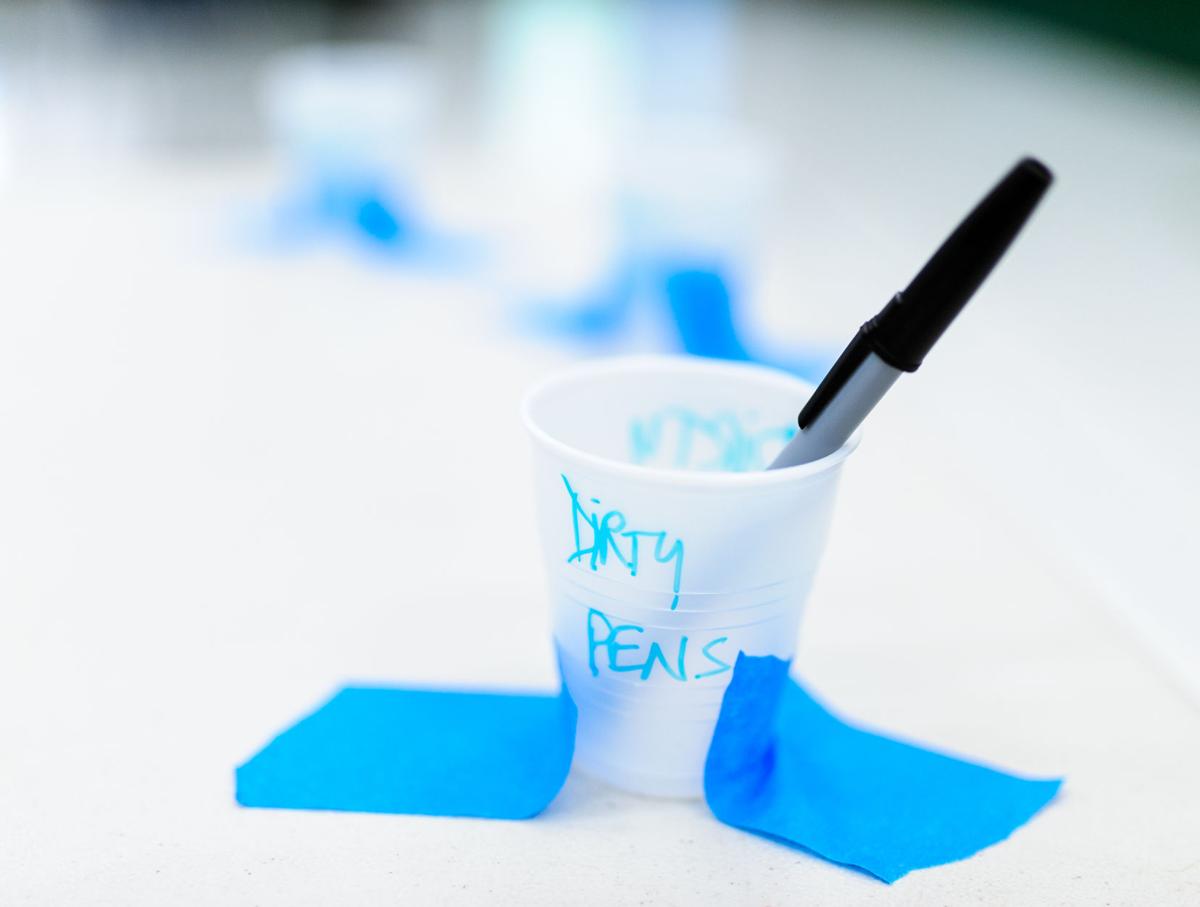 One of the precautions taken as a result of the pandemic, cups for previously used pens are arrayed on a voting table at Ritchie Elementary School Tuesday; the pens were recycled afterward.

Signs promoting primary candidates are arrayed along the sidewalk leading to the polling place at Auburn Middle School.

One of the precautions taken as a result of the pandemic, cups for previously used pens are arrayed on a voting table at Ritchie Elementary School Tuesday; the pens were recycled afterward.

Voters across Virginia went to the polls Tuesday to cast ballots in congressional primary elections. Registered voters in Fauquier County could participate in the Republican Party primary for U.S. Senate or, depending on where in the county they live, in the Democratic Party primaries for the 1st or 5th Congressional District.

Before Tuesday, the democratic presidential primary on March 3 was the last election cycle in which any registered voter in Virginia could participate. That was before the pandemic transformed public gatherings. (Town and city elections were held on May 19.)

Voters around Virginia went to the polls Tuesday to choose party nominees for U.S. Congress. A total of 6,905 Fauquier County residents, 13% o…

On Tuesday, elections officials were outfitted with masks and face shields. Every polling place had an abundance of hand sanitizer available and tables and chairs were spaced out to comply with physical distancing guidelines. Signs posted at polling place entrances asked voters to wear masks inside, and most did.

The proportion of absentee ballots in this election is on track to be high; more than 2,000 voters in Fauquier County had applied for an absentee ballot as of June 17, nearly as many as during the 2017 general gubernatorial election. In the May elections for Warrenton Town Council, 61% of votes cast were absentee.

“Traditionally, primary elections are a low absentee turnout affair," Ables explained in a June 17 email. The spike in applications this year, he said, is attributable to the novel coronavirus pandemic and the move by the Virginia elections commissioner to authorize any voter to vote absentee by using reason "2A - my disability or illness."

Still, polling places throughout the county saw a steady flow of individuals voting in-person on Tuesday.

By 2:15 p.m., 138 voters had cast ballots in-person at Auburn Elementary School, the polling place for the New Baltimore precinct. Candy Weitz, the precinct’s assistant chief elections officer, said that this primary has been a good trial run for the November general election in light of the new precautions in place because of the pandemic.

“It’s been a really productive primary,” she said. So that tables and chairs could be more efficiently spaced, a couple of weeks ago elections officials measured and marked the floor of the room that serves as the polling place.

She said she and her fellow poll workers have worked together for a long time – Weitz has been an elections official for 14 years – and that comradery will go a long way toward coming up with solutions to make things run smoothly and safely in November.

The poll workers in the New Baltimore precinct make sure they are having fun, too. At the doorway to the polling location stood an orange traffic cone topped with a mask painted a non-partisan purple, a wig and a scarf. Her name is Candy Cone and she sported glittery glasses reading “USA.”

The cone serves a safety purpose, Weitz explained – someone tripped on a protruding piece of metal there during a previous election – but its main effect is to add a bit of levity as people walk in to vote. “People are usually smiling as they come up to the table, and I’m like, ‘Thank you! That’s my mission! Smile! Be happy! Vote!’” she laughed. Candy Cone will get a dress by the November election, Weitz added with a smile.

Outside the school, Betsy Hostrop and Brian Groves greeted voters and distributed campaign literature from a tent on behalf of the Fauquier County Republican Committee. “We’re excited to finally have a nominee and start campaigning [for the general election],” Groves said. “We’re excited about the chance to take back that [Senate] seat.”

One of those candidates in the Republican primary, Thomas Speciale, stopped by the tent and chatted with Hostrop and Groves and greeted people on their way to vote. Speciale thanked the Republican volunteers especially for having information available about each candidate in the Senate primary.

James and Doris Gray, of Warrenton, had stopped by the tent a little earlier to chat. They had voted in the Republican primary, but they declined to say for whom. “Our oldest daughter is well-versed [in politics],” James Gray explained. “She told us who she voted for and we supported her.”

By 3:15 p.m., 254 people had voted at C. Hunter Ritchie Elementary School, the polling place for the Vint Hill precinct. “It started out really slow this morning, but it’s been really picking up this afternoon after lunchtime,” said Tony Velasco, the chief elections officer for the precinct.

He said that the stack of paper listing the names of those who had applied for absentee ballots was “extra thick” for this cycle, adding that in some past elections, thousands of people have voted at that polling place in a single day.

Grant Rampy, who was working the polls for the first time, said that he was especially pleased that, with only a few exceptions, voters had chosen to wear masks or face coverings when entering the polling place.

Outside the school, David Smalley, of Warrenton, said he voted for Cameron Webb in the 5th District democratic primary. “He sent of a lot of literature. I liked his views and opinions and his qualifications,” he said.

A woman - she did want to give her name - who had also voted at Ritchie said she voted for Webb as well. “Because of his credentials, honestly,” she said. “With COVID right now, having a doctor in that position would be best.”

Another voter, Walter Buzzetta, of Warrenton, had voted for Claire Russo. “I like her as a candidate,” he explained. He added that he might try to vote by mail this November, but he was pleased with the experience voting in-person Tuesday. “I felt it was perfectly safe. Everyone was wearing masks and spaced out. I felt safe doing it,” he said.

Earlier in the day, 131 people had voted by 1:20 p.m. at Cedar Lee Middle School in Bealeton. One of them was Jazmin Hill, of Bealeton, who voted for Qasim Rashid in the 1st District democratic primary. “I’ve seen a lot more publicly of him and I knew more about him than I did [Angie Williams],” she said.