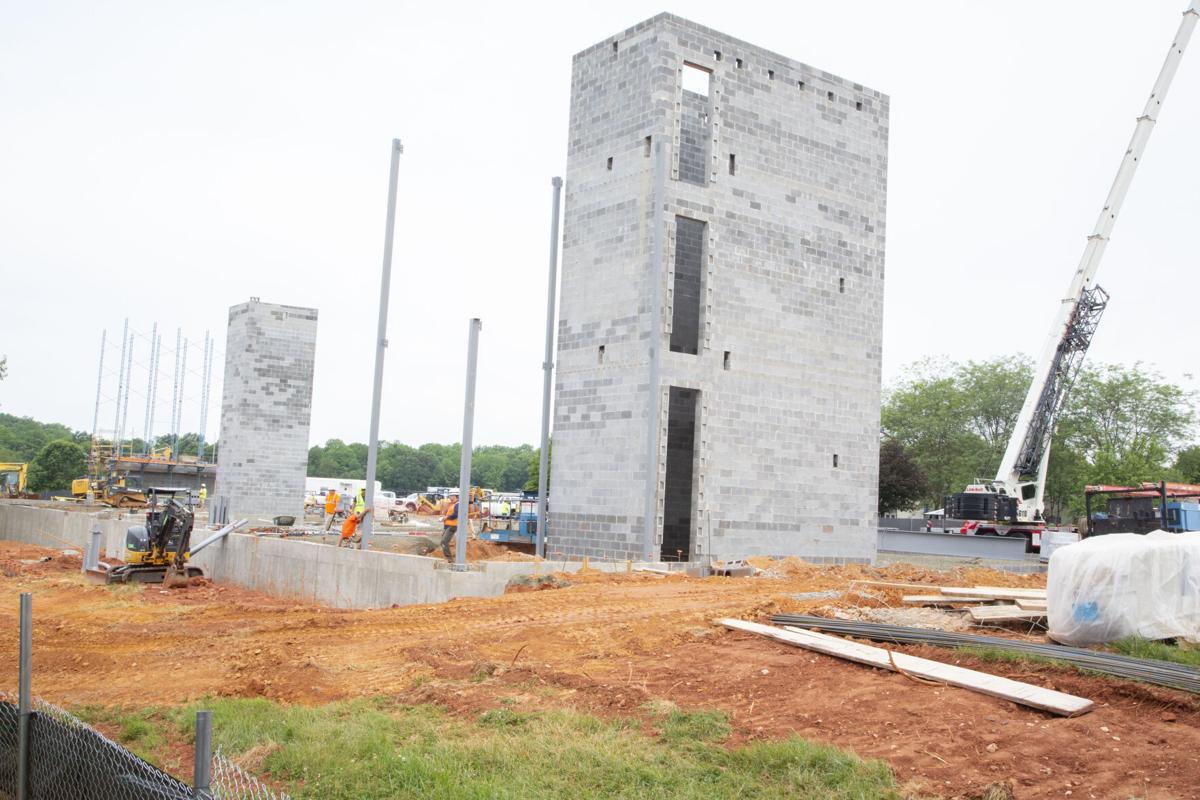 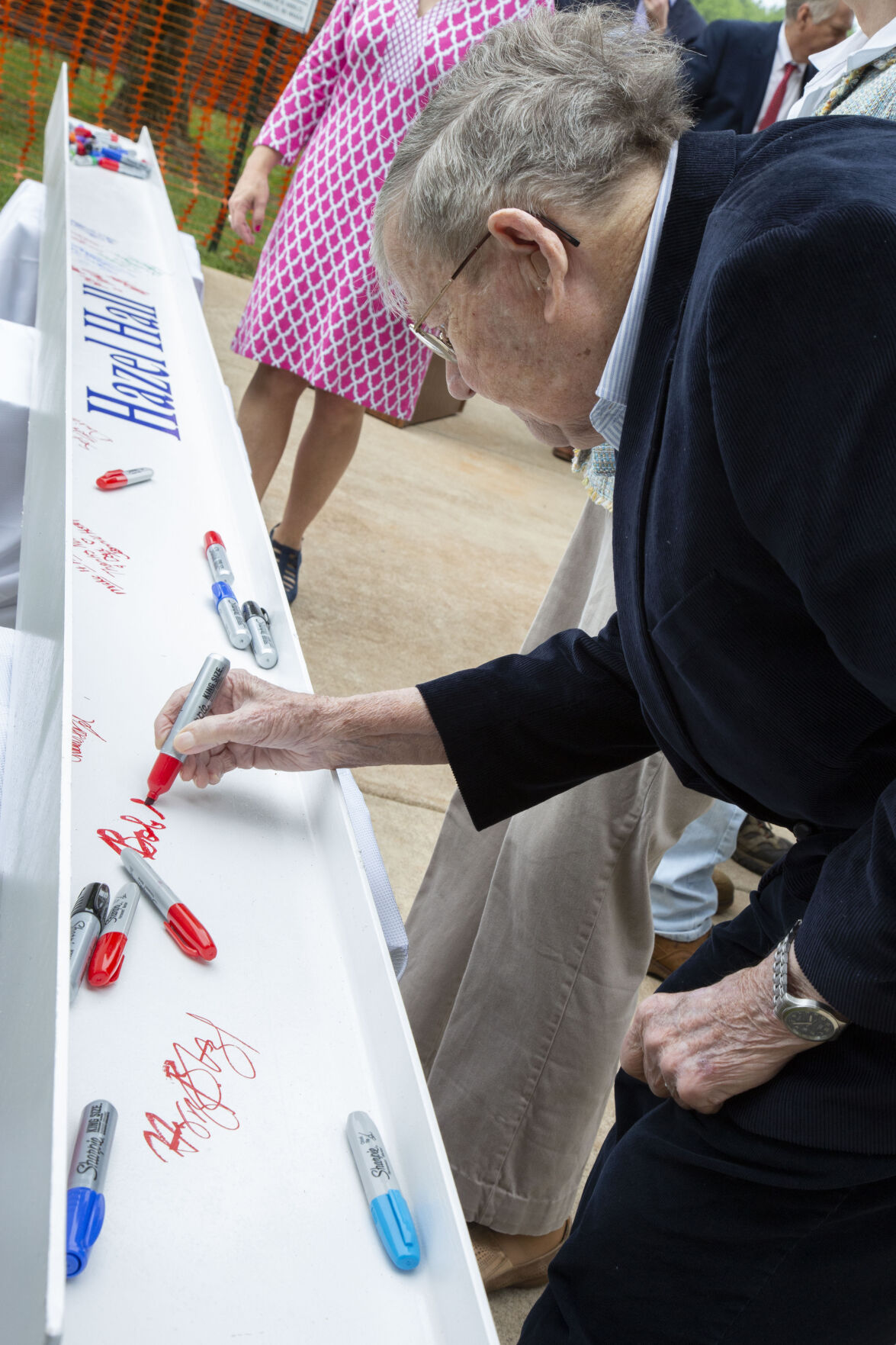 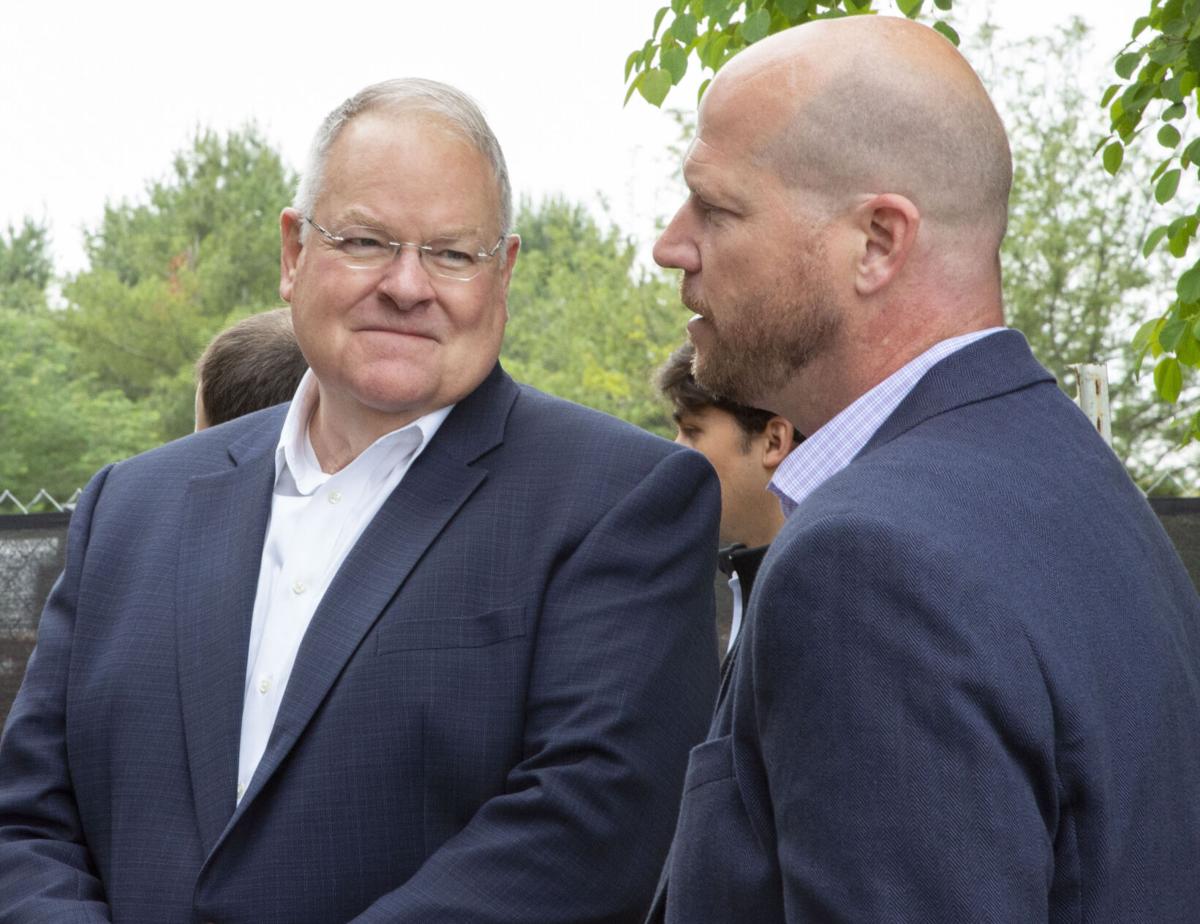 William A. Hazel, Jr. for whose parents Hazel Hall is being named, talks with Chris Coutts at last Wednesday's celebration. Coutts is provost of the Fauquier campus and vice president of communications and planning.

As the Warrenton campus of Lord Fairfax Community College begins construction on Hazel Hall, a new $30 million health, science and engineering building, its board of directors has also decided on a new name for the college -- Laurel Ridge Community College.

The college held a ceremony June 2 to celebrate the construction of the Eleanor C. and William A. Hazel Hall. Supporters at the gathering were invited to sign what will be the building’s final steel beam.

The two-story, 40,000 square-foot building will include state-of-the art classrooms and laboratories where health care, science and engineering students will be able to receive hands-on training.

William A. Hazel Sr. and his wife Eleanor were instrumental in bringing the LFCC satellite campus to Fauquier County in the early 1970s, and the William A. Hazel Family Foundation contributed $1 million for the campus’s newest building. William A. Hazel, Sr. passed away in 2012; Eleanor Hazel died in 2020.

The PATH Foundation contributed $1 million to the project in 2016 and private donations were secured as well. State funds were finally made available in 2019 when the Virginia General Assembly approved $7.4 million in additional funds to cover escalating construction costs. The college held an initial groundbreaking in 2017, but funding delays and rising costs put a hold on the building once its design was approved.

The Barn was constructed in 1989 with funds donated by Bob and Janet Sowder. Wolk Hall, the main academic building, and the Sowder Library complete the current campus. A plaza next to Hazel Hall will connect The Barn and Wolk Hall to the science building.

Grimm + Parker of Vienna, Virginia, is the design firm and Kjellstrom + Lee of Staunton, Virginia, is the general contractor on the Hazel Hall project. The building is expected to be ready for students in the spring of 2022.

The community college’s main campus is in Middletown, with a satellite campus in Warrenton and smaller facilities in Luray and Vint Hill. The college serves about 7,600 students annually in accredited programs along with more than 10,000 people enrolled in industry and business development classes.

LFCC’s board of directors, with input from more than 100 students, staff, alumni and members of the community, narrowed suggestions for the college’s new name down to five choices in May, and last week, the board chose Laurel Ridge Community College over Valley & Vista, Red Oak, Valley & Ridge and Newbridge.

The college is named for Thomas, the 6th Lord Fairfax, a British nobleman whose family was granted approximately 5.5 million acres of land in Virginia by the British crown during the 18th century. Fairfax eventually managed his vast holdings from an estate in Clarke County.

According to the LFCC committee, the college’s board chose the name in 1969 to coincide with the Lord Fairfax Planning District, renamed the Northern Shenandoah Valley Regional Commission in 2001. Neither Fairfax himself nor his family had any direct connection with the college, founded almost two centuries after his death.

The workgroup unanimously agreed, based on his history as a slaveowner and someone who “maintained an air of indifference to the American Revolution,” that if the college were being named today, the group would not recommend it be named for Thomas, the 6th Lord Fairfax, a statement from the college says. A survey found that about 90% of people familiar with the college did not know who Thomas, 6th Lord Fairfax was, according to the statement.

The statement quotes retired Lt. Gen. Benjamin Freakley, who represents Shenandoah County on the LFCC board. “Often, we just move forward day by day without thinking about our name, so this gives us a great opportunity to look at ourselves and determine who we are in relation to our values, our mission, where we are today as an institution and where we want to go tomorrow. Lord Fairfax doesn’t represent anything we are about.”

The name change is expected to cost between $115,000 and $298,000, according to a 2020 report, mostly due to branding expenditures like new signs, website redesign and other marketing materials. No public or tax money will be used for the changes, LFCC President Kimberly Blosser told the Winchester Star in April. “Money to change the name would come from LFCC’s auxiliary fund, Blosser said, which includes revenue the college earns from its campus bookstore, vending machines and renting out campus spaces for events. Student tuition will not go toward renaming costs,” the Star reported.

A resolution passed by the Fauquier County Republican Committee called the name change part of a “reactionary” effort to “obliterate history” and argues the funds could better be used elsewhere.

In Frederick County, supervisors – all of whom are Republicans -- passed a resolution last month opposing the change, with at least two supervisors suggesting that the county withhold funds from the college if it changed its name.

Frederick County contributes about $81,000 per year to the college, and Fauquier contributes around $78,000. The vast majority of the college’s $32 million annual budget comes from tuition fees and direct funding from the state government.

The State Board for Community Colleges has the final authority on the new name and will make a decision in July.