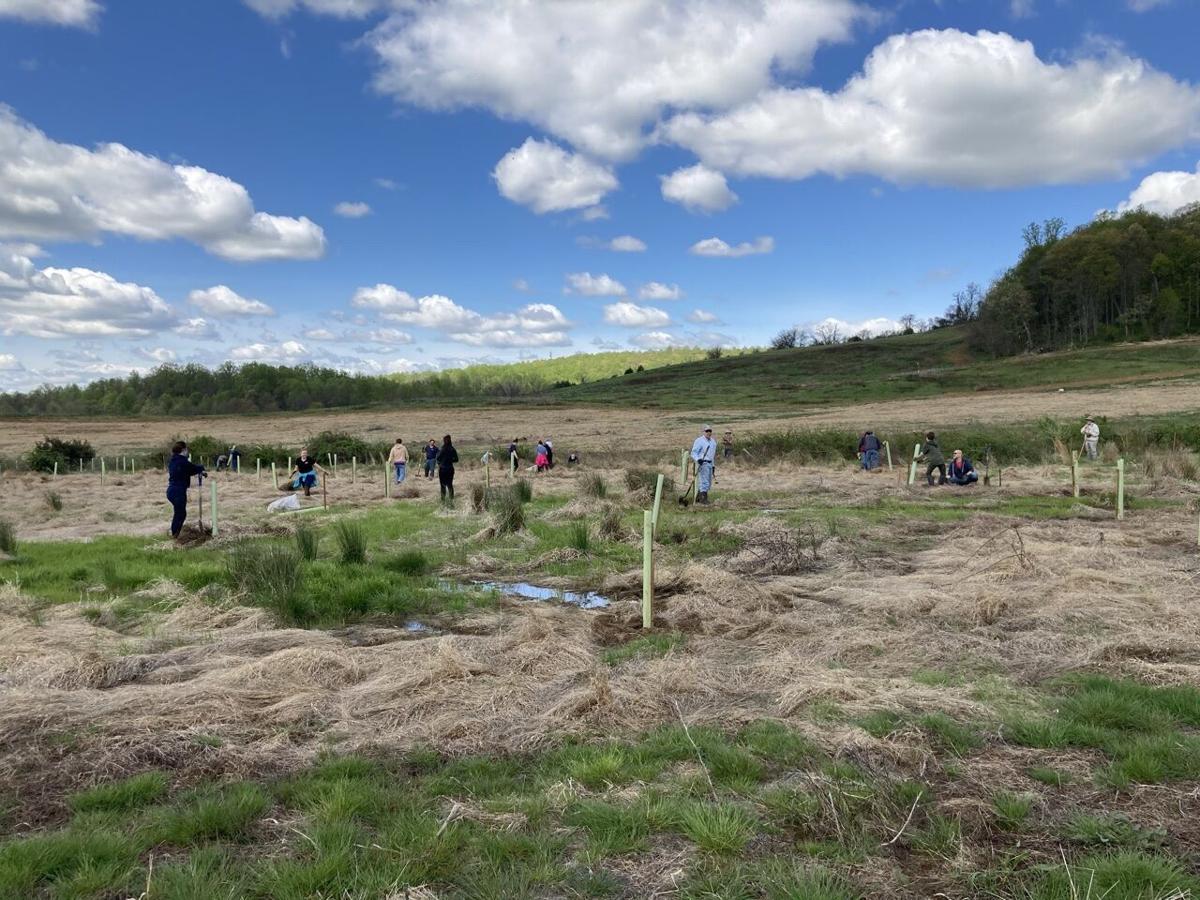 More than 1,000 young trees will eventually be planted in this pasture north of Warrenton. 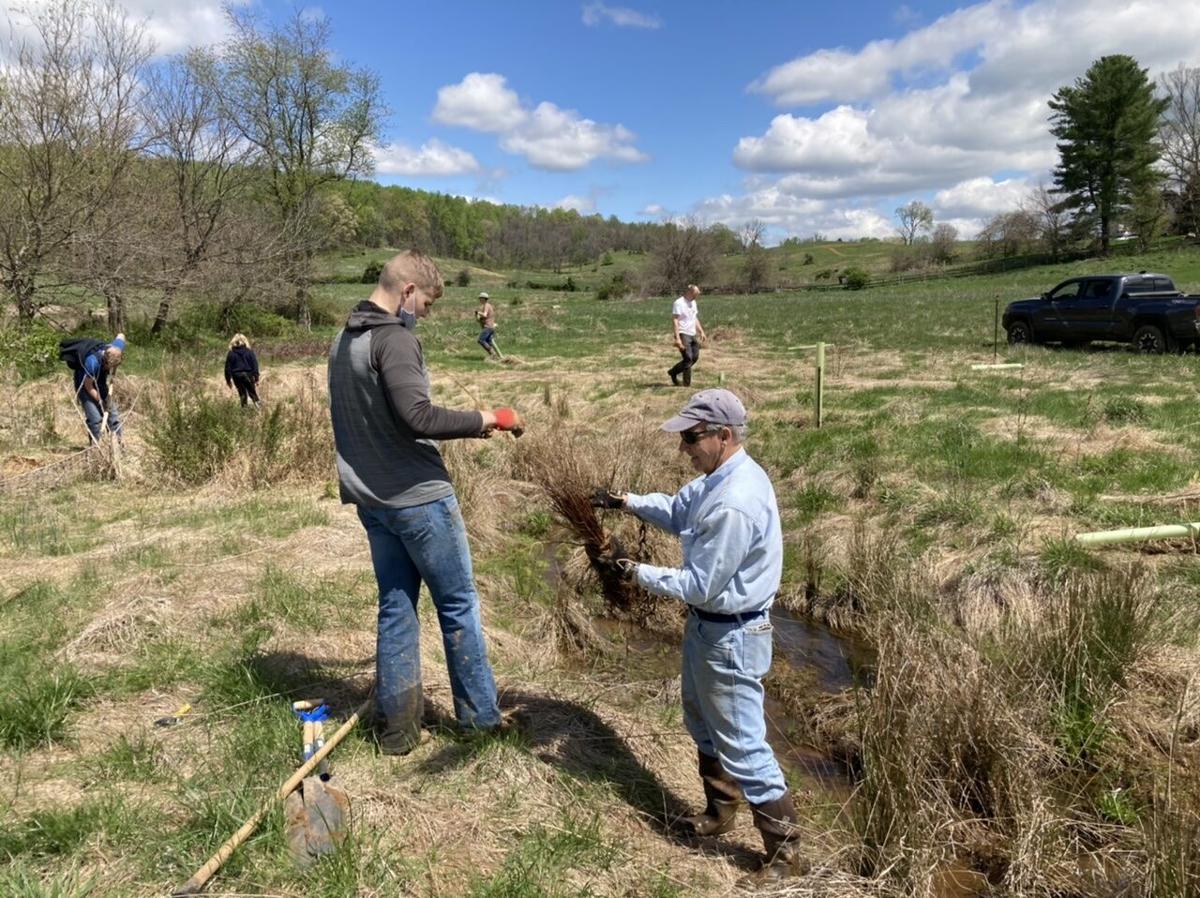 Francisco Dallmeier, right, is a biologist with the Smithsonian Conservation Biology Institute 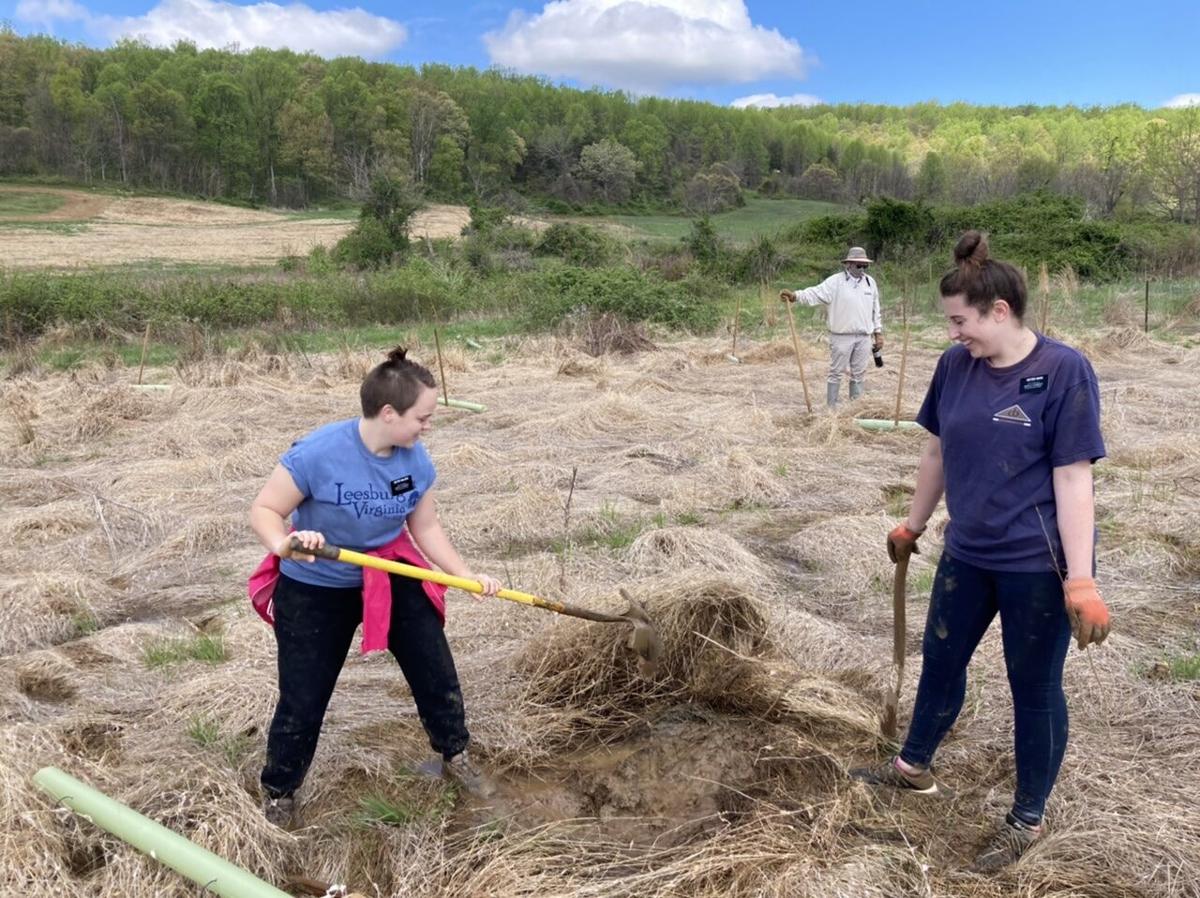 Volunteers Courtney Majors and Brittney Hahn were among the volunteers planting trees April 17.

More than 1,000 young trees will eventually be planted in this pasture north of Warrenton.

Francisco Dallmeier, right, is a biologist with the Smithsonian Conservation Biology Institute

Volunteers Courtney Majors and Brittney Hahn were among the volunteers planting trees April 17.

During recent Saturdays, a diverse crew of biologists, conservationists, school children and Mormon missionaries has gathered in a pasture north of Warrenton, at 6712 Blantyre Road. Outfitted with rubber boots and shovels, they fan out across the muddy, uneven ground, on a mission to plant trees.

The volunteers, led by a Warrenton-based conservation nonprofit, the Clifton Institute, are working to restore a 100-acre tract of grassland to a native grassland with riparian buffers after years of use for cattle grazing. They aim to plant nearly a thousand trees.

Most of these new trees will serve as riparian buffers — forested areas near streams that filter pollutants and prevent erosion — which will improve the health of Cedar Run, which in turn will protect the watershed that flows through the pasture and eventually empties into the Chesapeake Bay. Trees are planted within 50 feet of the stream on either side. On the most recent Saturday, three rows on either side were planted.

“[This project] is the biggest one I’ve heard of,” said Marie Norwood, land management outreach director for the Clifton Institute.

For years, cattle were allowed to graze in and around the streams that crisscross the land; as a result, the property became contaminated by fecal matter and eroded soil. This contamination of Cedar Run was harmful to the watershed and local wildlife, said Bert Harris, executive director of The Clifton Institute. “It was really bad,” he said.

But, he added, “When you get the cows out and have a forested buffer, there’s a really diverse community of [wildlife] living in the creeks.”

The trees are a combination of Pin Oaks, River Birches, Sycamores, Silky Dogwoods and Silver Maples, all of which are native to Virginia. Fully grown, they also will provide a habitat for native bird populations, which have been in decline due to suburban and agricultural development.

On the morning of April 17, around 20 volunteers arrived at the institute’s field station for the second tree-planting day this year. Working in pairs, they stripped away invasive weeds and planted seedlings deep in the mud, inserting plastic tubes around the branches to deter hungry deer. “The trees are very vulnerable in the first years,” said Francisco Dallmeier, a biologist with the Smithsonian Conservation Biology Institute who came out to volunteer, “and the deer are a big problem.”

Among the volunteers were six Mormon missionaries from the Washington D.C. South Mission. “It’s neat knowing that you’re doing good things, even though we might not see the effects right away,” said Brittney Hahn, who recently arrived from Utah. “But if I come back to Virginia in 20 or 30 years, I might be able to see the impact we’ve had.”

Owen Kemp, a high school student from Fredericksburg, was there to fulfill his community service requirement for the National Honor Society. “I really like the educational programs they have here,” he said as he planted seedlings with his father, Chris Kemp. “They’re always teaching us something new.”

“We’ve been enjoying this land for years,” added his father.

The process of reforesting the pasture began in November 2019, when The Clifton Institute applied for a nearly $7,000 grant from the National Resources Conservation Service, part of the U.S. Department of Agriculture. The institute had acquired the land in 2011 and removed the cows by 2018. Local environmental organizations, such as the PATH Foundation and Friends of the Rappahannock, also contributed tools and additional funding. Since planting started on April 10, volunteers have planted hundreds of seedlings, and the institute expected to reach their goal of 957 trees earlier this month.

If these trees survive the vulnerable seedling stage, “the roots will start to stabilize the banks within two or three years,” said Harris.

Harris plans to continue the riparian buffer planting in the adjacent pasture, which also belongs to the institute and is still being grazed. “On the grazing side, we’re trying to get funding for some more trees,” he said, which would lessen the cattle’s environmental impact.

Dallmeier, who has worked on conservation projects around the world, hopes that more local landowners will adopt reforestation efforts. “Pretty soon you’ll be able to see what a natural Virginia landscape looks like,” he said.

Where: The Clifton Institute field station is on Blantyre road, right off U.S. 17 (6712 Blantyre Road, Warrenton).

(link for web only: https://cliftoninstitute.org/evrplus_registration/?action=evrplusegister&event_id=452)