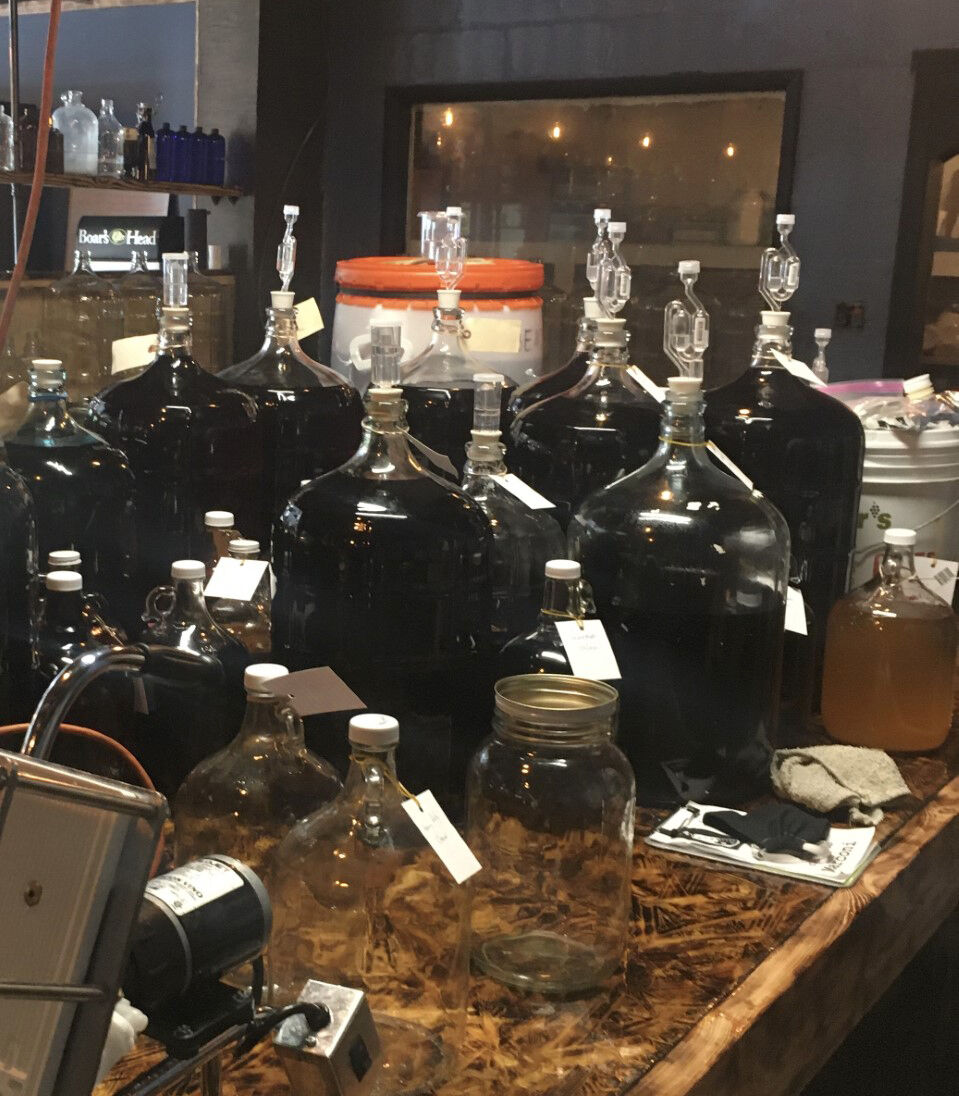 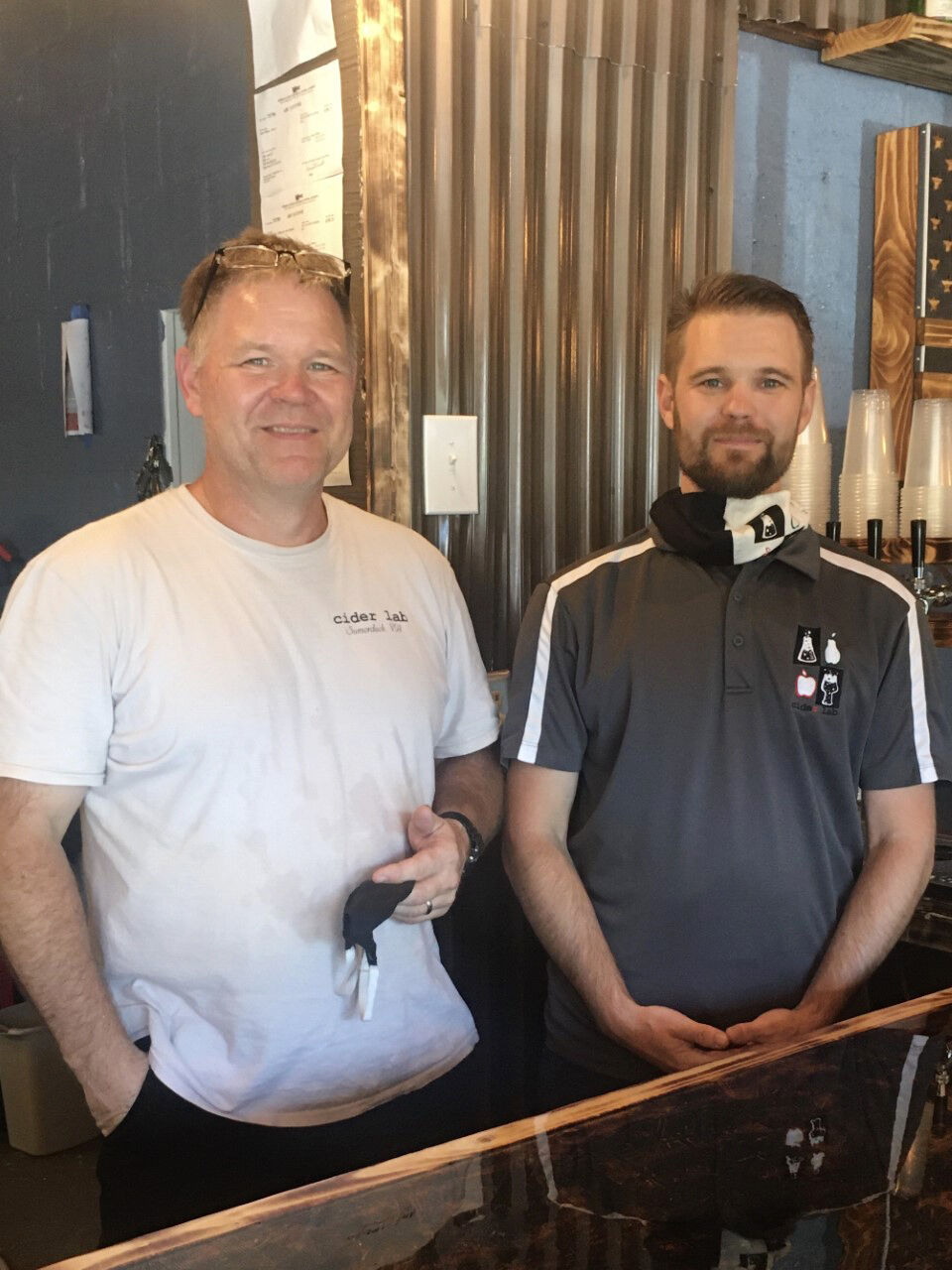 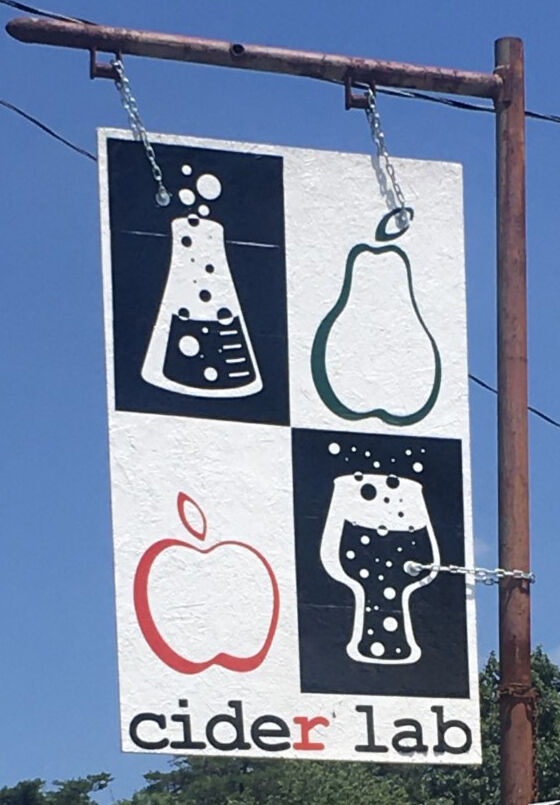 The Cider Lab is at 5344 Sumerduck Road in Sumerduck.

The plan was to open the Cider Lab and sell 200 gallons in the first 10 weeks of launch. But a friendly visit from the owner of nearby Rogers Ford Farm Winery changed the plans just a tad.

“Johnny Puckett stopped by and tasted the ciders. He asked how much we were going to produce, and we told him. He said, ‘No way. You’ll need a lot more than that,’” said A.J. Rasure, co-owner, along with his father James Rasure, of the Cider Lab.

With a bit of scrambling, the nascent cider factory boosted its production from 200 to 500 gallons and unlocked its doors on July 11. The first day’s sales were 110 gallons. Good advice from the wine guy.

Since its opening, the Cider Lab has sold 400 gallons of cider in 15 days of operation. And consider they’re open on just Friday, Saturday, and Sunday. Word gets around fast.

The two “cider scientists” behind the success story are a father-son team having a lot of fun. Both are employed full time in worlds far removed from cider.

James Rasure, 55, is a retired U.S. Navy officer with five years’ experience in submarine nuclear engineering and 15 years in meteorology and oceanography. Today, he works as a satellite scientist at the National Reconnaissance Office in Chantilly.

A.J. Rasure, 32, was in the U.S. Marine Corps Band for 12 years before retiring to start a photography business focused on weddings and commercial real estate. He returned to college and degreed in physics and mathematics.

Currently, he is a physicist at the Dahlgren Naval Base. He is also assistant band director at Chancellor High School.

So, the question arises, when do these guys find the time to make cider?

“Between the hours of 5:30 and 11 every night,” said James Rasure. It would likely be seven days a week, but they take a break to sell their libations the rest of the time.

Enthusiasm and passion are hallmarks of these two energized cider guys. The sharp turn into cider started with an over-productive tomato garden. Years ago, James Rasure’s father told him you could make anything into wine.

“So, I made a tomato wine. It wasn’t very good. My wife thought we needed some help and bought a winemaking class for A.J. and me," said the elder Rasure. The course, held at the Bacchus Winery in Fredericksburg, was seven weeks long, one day each week.

“We enjoyed making wine together so much we continued to go in every week after the course was over to make different kinds of wine,” said James Rasure. As can often happen in the world of fermentation, they were hooked.

Their inquisitiveness led to making apple cider for a friend. The guy decided he didn’t want to buy six gallons of the beverage. They decided to spice up the excess with Habanero.

It made the cider too hot, so some mango syrup was blended in. “It turned out so good we took our third batch to Red, White and Bleu Brew in Locust Grove to taste. They ended up purchasing five gallons a week for sale at the brewery,” said James Rasure.

The offering has been further refined since its inception and is today one of Cider Lab’s customer favorites.

Word of the unique flavors available at its laid-back cidery has dictated a soon-to-be production increase to 1,100 gallons, featuring six ciders in their tasting room.

"With the equipment we now have, we can push production to 2,200 gallons at some point,” explains A.J. Rasure. "But we like cider to age because it creates better flavors, especially with darker fruits like blueberries, blackberries and raspberries. We don’t want to push production too fast.”

Given the number of customers coming through the front door, the pressure will build to balance quantity with quality. The latter will take the lead, say the owners.

Because of the newness of the cidery, there is a synergy developing between Rogers Ford Farm Winery and the Cider Lab. “They send people our way, and we send people to the winery. Together we’re trying the make the linkage between the two consumer groups,” said A.J. Rasure.

When you enter the comfy Cider Lab, directly ahead, behind a glass wall, is a view of its production facility. To the right is the tasting bar. They sell six selections, ranging in sweetness from dry to 5% residual sugar. Alcohol hovers around 5%.

The tastings are $3 each or $15 for the six. Currently, they are not bottling any of the ciders. Purchases can be made by the glass or in two sizes of growlers. Picnic tables under tents offer a relaxed atmosphere to enjoy the beverages.

James Rasure sums up the new enterprise by saying, “I am having so much fun reconnecting with my son and making cider. It’s just great seeing the community coming out here and having a picnic in our yard and drinking our cider. I could do this for the rest of my life.”