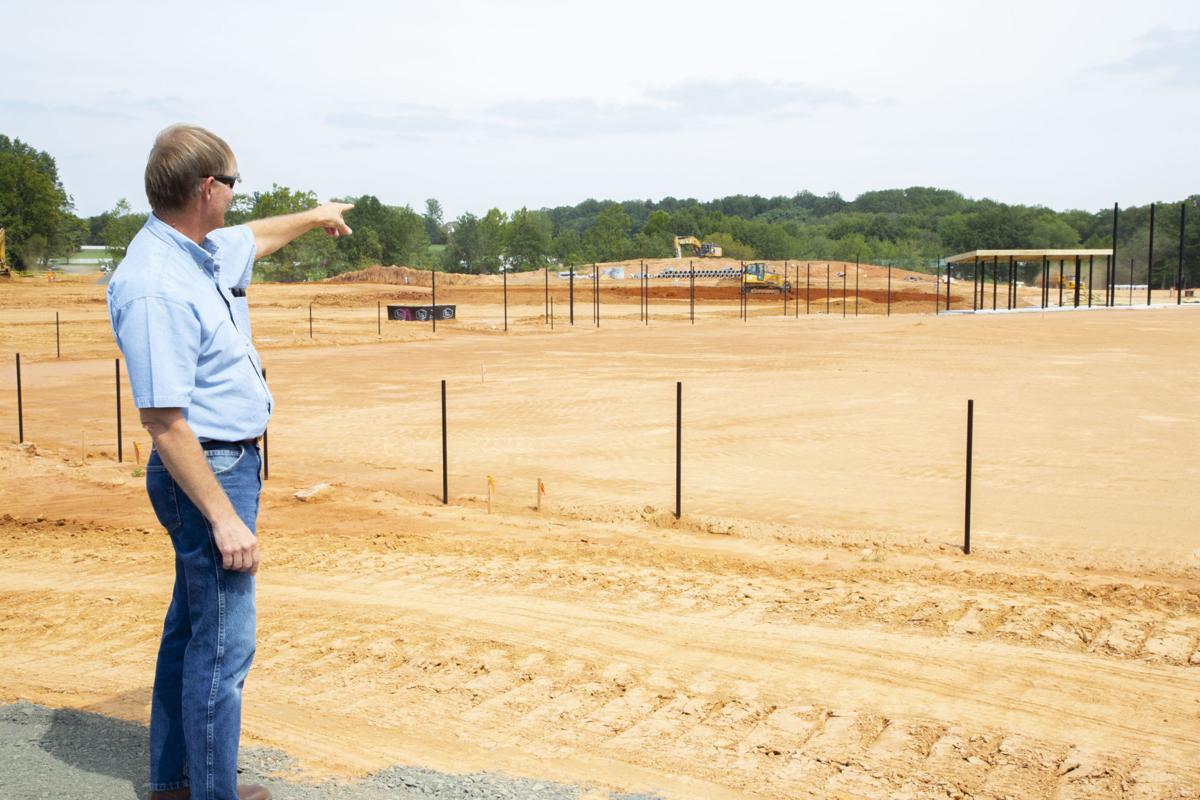 Parks and Rec Director Gary Rzepecki points to where one of the five diamond fields is being built. 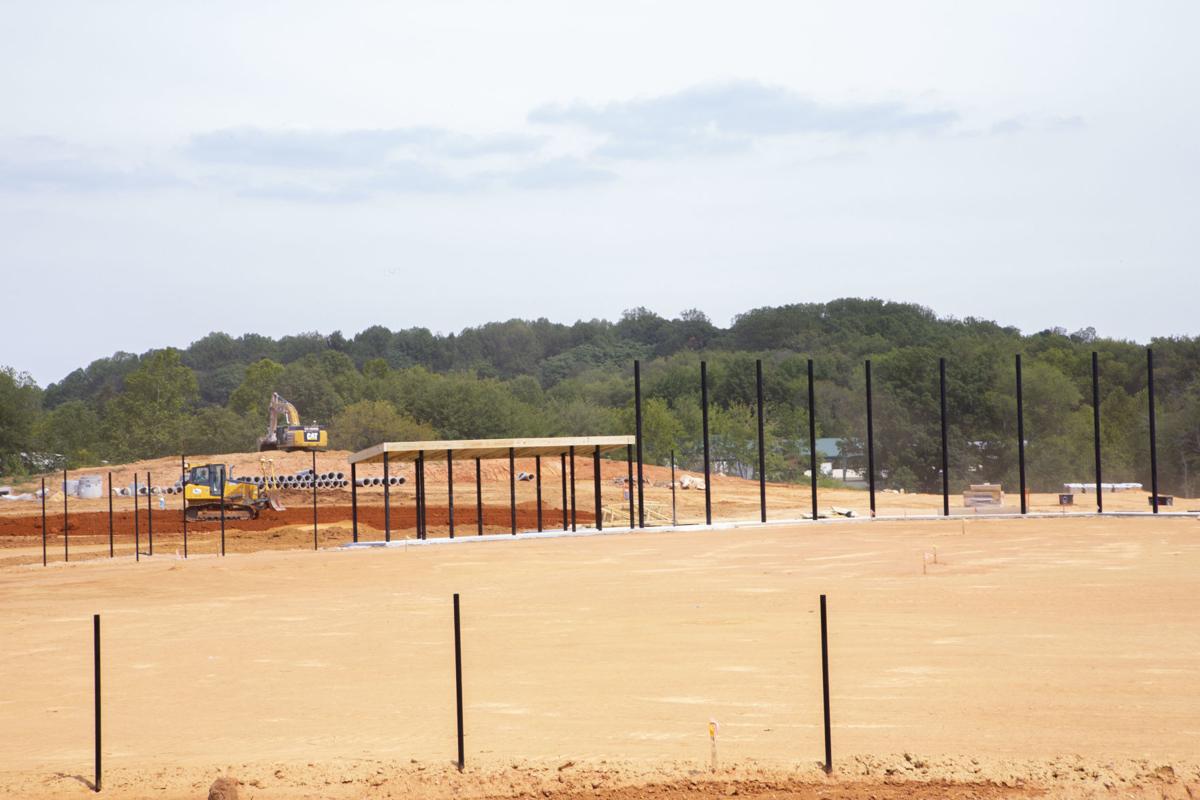 Roofs have been placed on the dugouts of one of the diamond fields; construction of other fields continues behind. 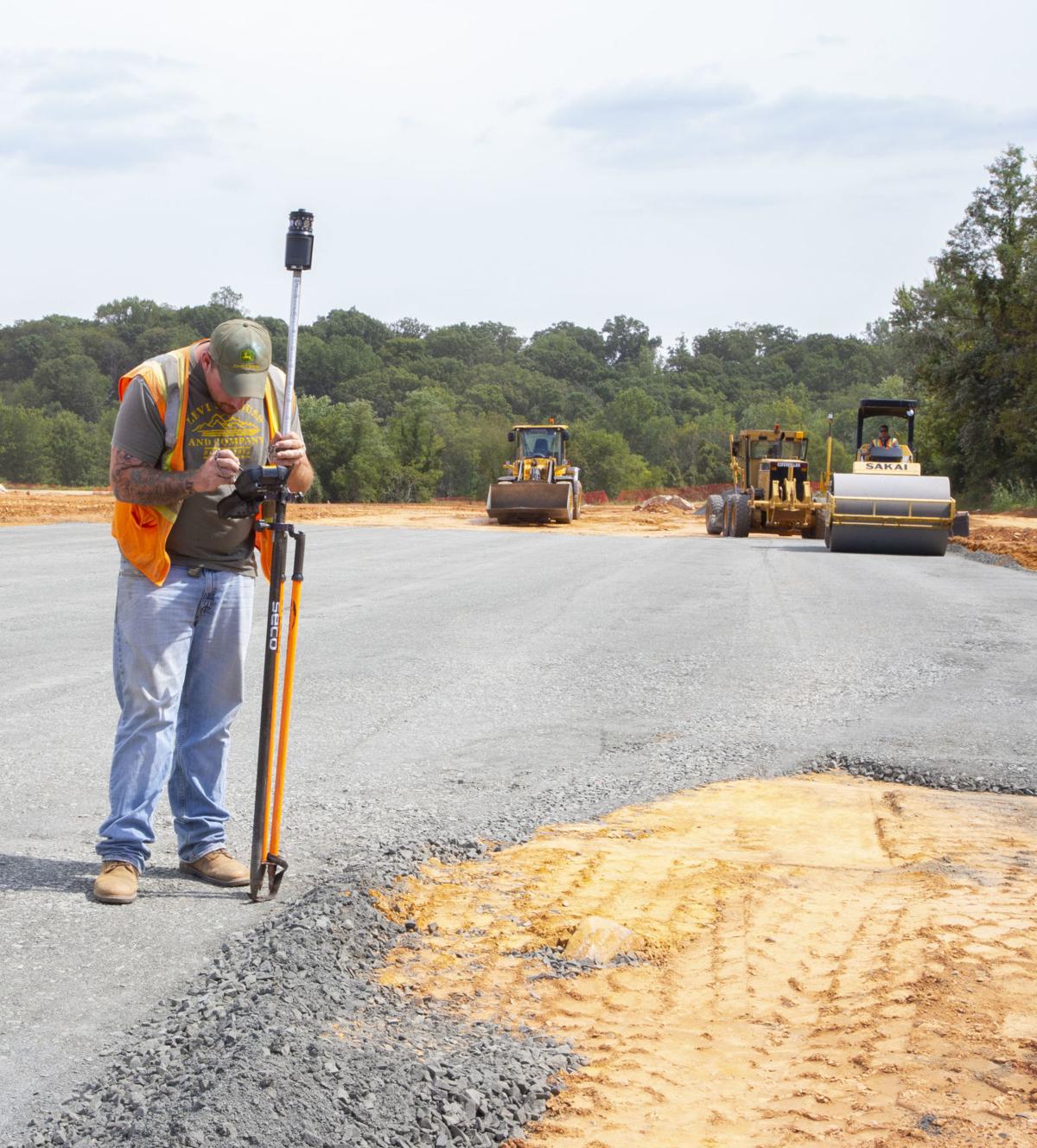 S.W. Rodgers workers prepare one of the small parking lots for paving. 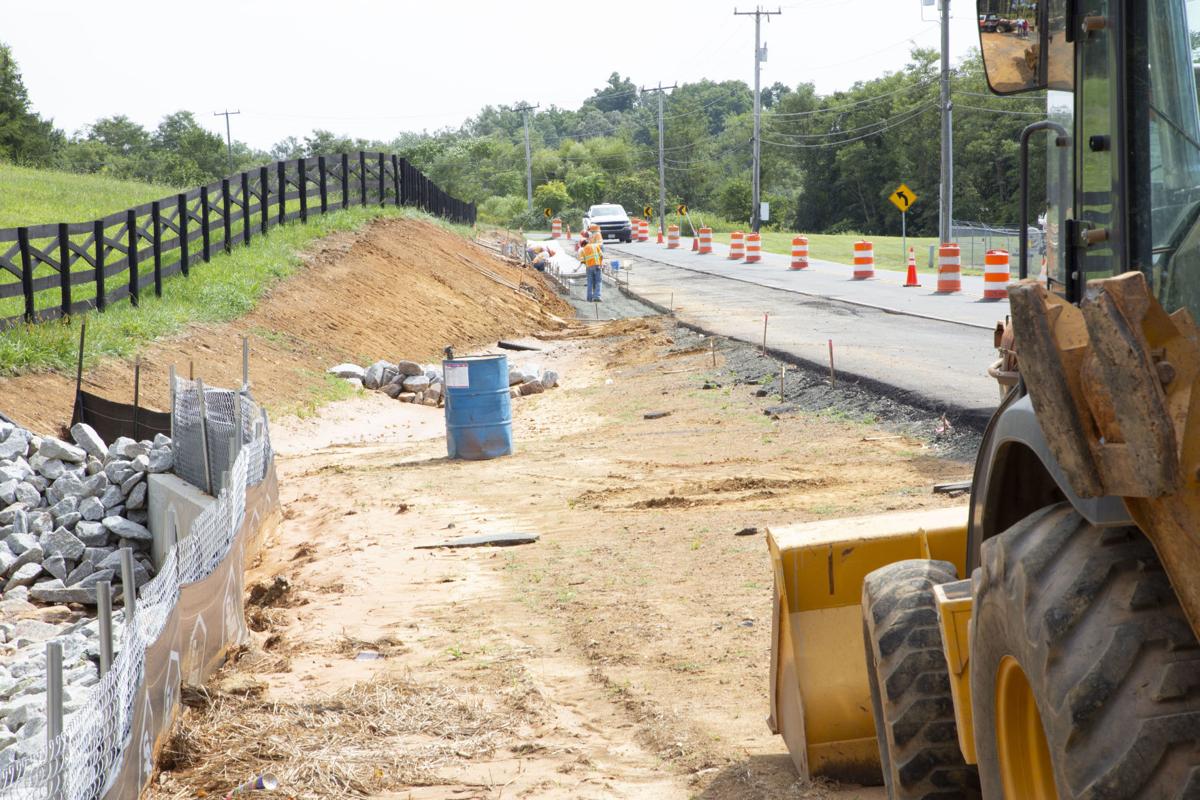 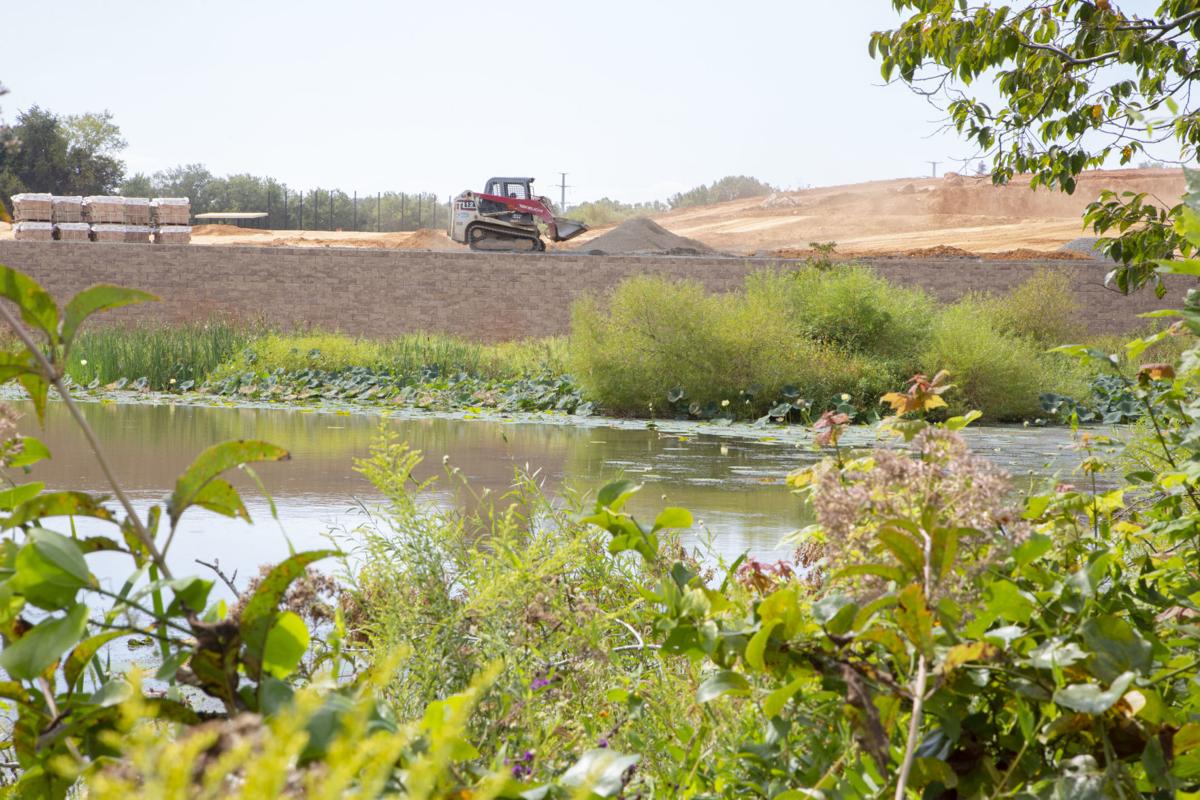 The retaining wall that defines the edge of the sports complex can be seen across the pond from the Fauquier County Fairgrounds.

Parks and Rec Director Gary Rzepecki points to where one of the five diamond fields is being built.

Roofs have been placed on the dugouts of one of the diamond fields; construction of other fields continues behind.

S.W. Rodgers workers prepare one of the small parking lots for paving.

The retaining wall that defines the edge of the sports complex can be seen across the pond from the Fauquier County Fairgrounds.

The future Central Sports Complex at the corner of Meetze Road and Old Auburn Road is beginning to take shape. With a little imagination and a generous dose of forward thinking, one can visualize where the six rectangular fields and five diamond fields will sit. During a tour of the construction site Friday, Sept. 6, Parks and Rec Director Gary Rzepecki said that fields should be playable by the fall of 2020.

The overall project consists of six rectangular multi-use fields for sports such as soccer and lacrosse, a large diamond field and four small diamond fields, an umpire field house, a main building, an equestrian path and parking. A skating rink is planned for a future phase of the project.

The fields will serve a variety of youth and adult field sports teams, including baseball, football, lacrosse and soccer. S.W. Rodgers of Gainesville is the general contractor. Timmons Group of Richmond designed the project.

An earlier timeline for the fields projected that at least four fields would be playable by the end of August of this year. That ambitious plan was put in place so the county could qualify for a Land and Water Conservation Fund grant of $1.3 million.

County Administrator Paul McCulla explained, “We did not reach a deadline because the county did not end up taking the grant.”

McCulla said that the experiences of other governments that received grant money through the same program gave Fauquier County officials pause.

He added, “We began to talk to folks in other counties. Fairfax County is still waiting to receive funds a year later” after completion of a project. “That gave us grave concern” – that along with a requirement that the stated purpose for taking the money – for athletic fields – continue “in perpetuity” without change.

“At the end of the day we did not take the grant” that was to come from the federal government through the state, McCulla said.

Instead, the board of supervisors authorized the county administration to borrow the money.

Rzepecki said his understanding is that the county was able to borrow the additional funds without adding to the debt service.

The project budget is $13,188,491, paid for with debt funding, plus $4,421,366 in county and grant funds. The Virginia Department of Transportation is a grant funding source.

Erin Kozanecki, the county’s director of management and budget, explained, “The project budget has not changed … The county was able to use the proceeds from the bond (debt) issuance to offset the $1.3 million LWCF grant (which is a stand-alone federal act through the National Park Service).

“This does not impact the expected annual debt service payment … market conditions are such that the bond issued at a premium providing additional proceeds. This occurs when investors are looking for less risky options in the market and will pay a premium for the more conservative investment option.”

She said that the VDOT grant is a state funding program, titled recreational access, which has no federal dollars tied to it. It provides an additional $425,000 in grant funding for the project.

Vertical posts for one of the smaller diamond fields’ backstop are in place and roofs have been placed on two dugouts. Six inches of topsoil will go on top of the leveled field and after that, sod will be installed. Rzepecki said that water trucks will have to be brought in to water the sod once it’s in place.

On Friday, construction crews were laying pavement for the large parking lot just to the left of the Meetze Road entrance road, located between one of the rectangular fields and one of the diamonds.

Work is progressing simultaneously on some of the other fields. “This area was very hilly. It all had to be cut down and leveled,” Rzepecki said. “Most of the cut and fill operation is completed, approximately 400,000 cubic yards of dirt was moved. About 10,000 cubic yards of dirt is still left to move, besides the topsoil, which has to go back down,” he said.

The northbound deceleration lane on Meetze Road was also being worked on Friday. Rzepecki said that some Verizon power lines on the complex side of Meetze – in front of Moriah Farms -- would be moved to the other side of the road once permits were finalized, leaving room to widen the entrance and add landscaping. “It would have been better if we could have gotten that done before now, but permits take a while,” said Rzepecki.

VDOT is responsible for the construction on Meetze Road and for the part of the entrance road that leads to the first parking lot.

The road will continue around the fields and lead out to a back entrance on Old Auburn Road. Rzepecki said that entrance road, which runs adjacent to the Fauquier County Fairgrounds, will be closed most of the time; it can be opened for special events. A recently completed retaining wall that defines the edge of the complex can be seen by looking across the pond at the Fairgrounds.

Work started Monday, Sept. 9 on trails between the fields and from the park entrance.

Restrooms will not be completed in this first phase of the construction, but are in the plans for the future, said Rzepecki.

This is the most disgusting waste of taxpayer dollars I have ever seen in the decades I've been here. No one I've talked to since this was approved think it's a worthwhile project. There are a ton of other things the approx. 8-9 million taxpayer dollars could have been better spent on.

Just goes to show just how out of touch our boards and politicians are!! Vote them out!