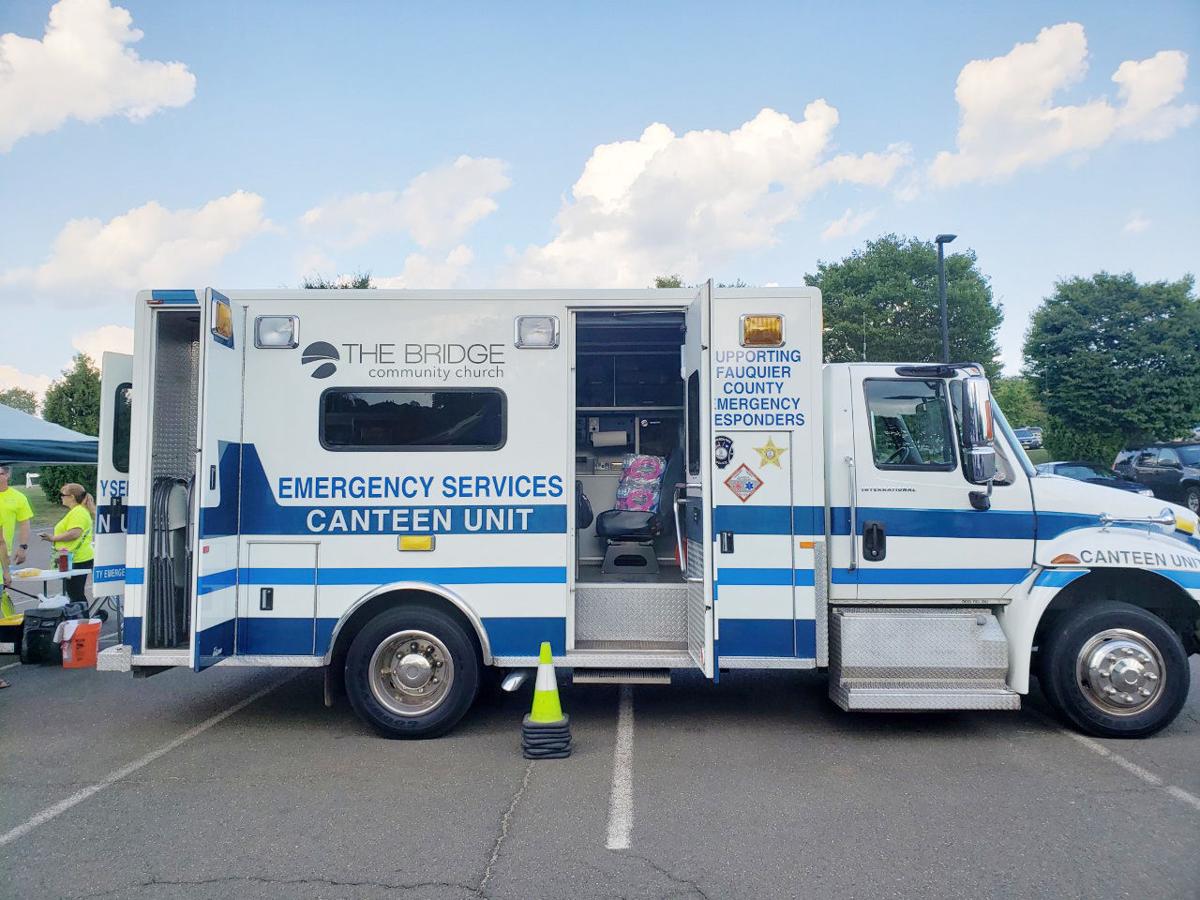 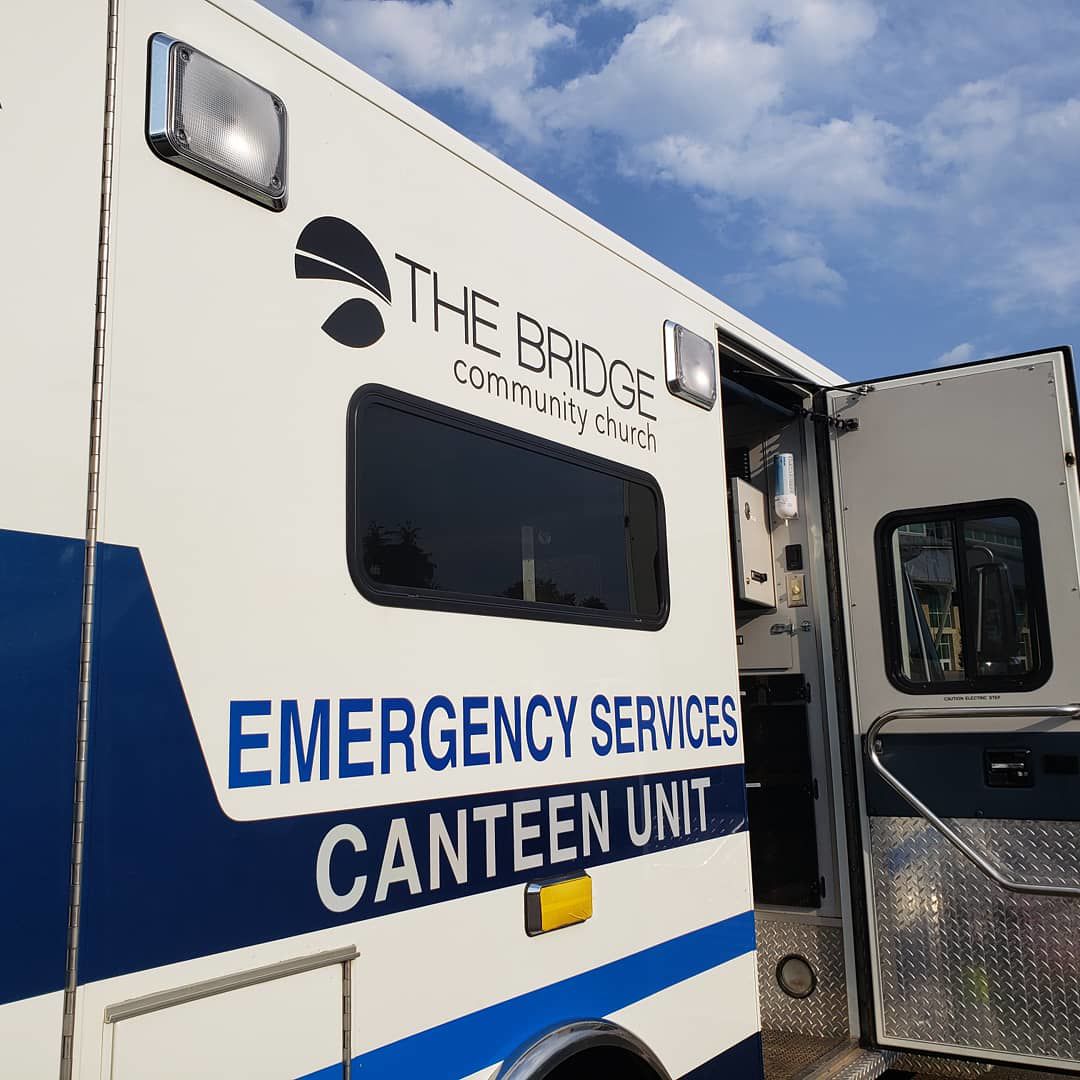 The Bridge Community Church Emergency Services Canteen Unit has been operational for about two months but got its first real test Monday, Aug. 5.

The revamped former Remington Volunteer Fire and Rescue Department ambulance has been repainted and equipped to support first responders during incidents that last an hour or more. The 44 members of the Canteen Unit are grouped into four teams of 11, on call for a week at a time. They stand ready to offer cold drinks, snacks and cold towels (for a short, level 1 incident); sandwiches and other more substantial food (for a level 2 incident lasting four to six hours); or pans of lasagna, plates of chicken or crockpots of chili (for a level 3 incident, involving multiple teams, which could last eight to 12 hours).

The Aug. 5 incident, a small barn fire that lasted about three hours, required only a couple of Canteen team members but presented a special problem. Team leader Dave Cooper explained that the fire was difficult to get to; the Canteen truck was not able to drive to where the firefighters were. Solution: A two-person utility task vehicle with a space in the back was enlisted to transport the water, Gatorade and snacks to the first responders battling the fire.

Cooper said, “We were able to provide cold drinks, snacks and the five-gallon bucket with ice water and terry cloth towels, which were a huge hit. We served approximately 30 firefighters who were extremely grateful.”

He wrote to his fellow team members: “Yesterday I received texts from the Remington Volunteer Fire Department, thanking us for an outstanding job on the fire Monday.” He added, “There was a unit at the scene from Brandy Station (from Culpeper County) that was not familiar with our unit/operation. The quote from them was ‘that canteen unit is the bomb.com’(yes, bomb dot com).

“Another comment was on the ice bucket/towels that we provided. The firefighter said that normally after he comes out of a fire the first time that he is done, but Monday, after using one of our ice cold wet towels with the ‘Sea Breeze’ (an astringent cleanser that smells of peppermint) added that he was ready to go back in! That is an amazing statement, just imagine if he was able to go back in and save more property or … someone’s life!”

Cooper and his teams have been trying to get the word out about the Canteen service. They showed off their truck at recent First Night events in Warrenton, at National Night Out Aug. 6 and a fire chief’s meeting Aug. 1.

Cooper said, “We were able to set up a cooking operation at National Night Out and practice our cooking and serving skills. It was like we had been running a cook line for years! We gave out hot dogs and hamburgers with all the fixins' to all of the first responders; they were a huge hit.”

Cooper said the idea for the Canteen came from Bridge Community Church’s Pastor Danielle Dean. The church has had an adopt-a-cop program, where they provide assistance to a police officer. But, Cooper explained, “Pastor Danielle, said, ‘This is good, but we want to do more.’”

Cooper, who is retired from the Prince William County Fire Department, spoke to Steve Wright, president of the Remington Volunteer Fire Department, to see how Bridge Community Church could help. “At first, we were thinking we could use an old church van to provide water and granola bars, but the Remington department was getting ready to retire an ambulance.” Cooper said that the PATH Foundation provided $18,940 to buy the ambulance and outfit it for its new purpose.

The Canteen has three generators, two coffee makers, an ice machine, an electric skillet, a toaster oven, a Crock-Pot and a gas grill. Non-perishables like water and snacks are stored on the truck so it’s always ready to roll, Cooper said. For longer events, the Canteen can fill up with supplies from the church freezers.

For level 2 or higher incidents, Cooper has arranged with several community partners for help in feeding hungry firefighters. A call to Walmart, Chick-fil-A, Mcdonalds, Jersey Mike’s or Firehouse Subs will yield food to feed up to 30 people for an event. The local businesses donate the sandwiches, packaged for transport.