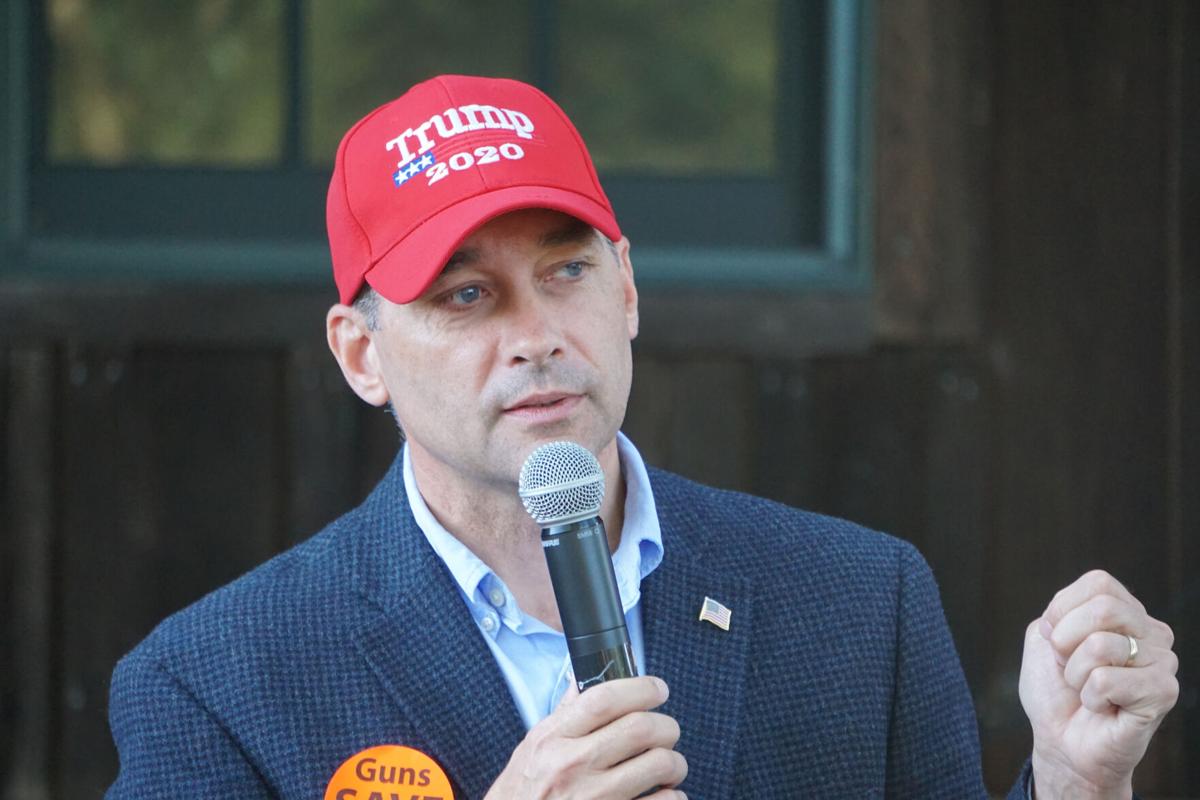 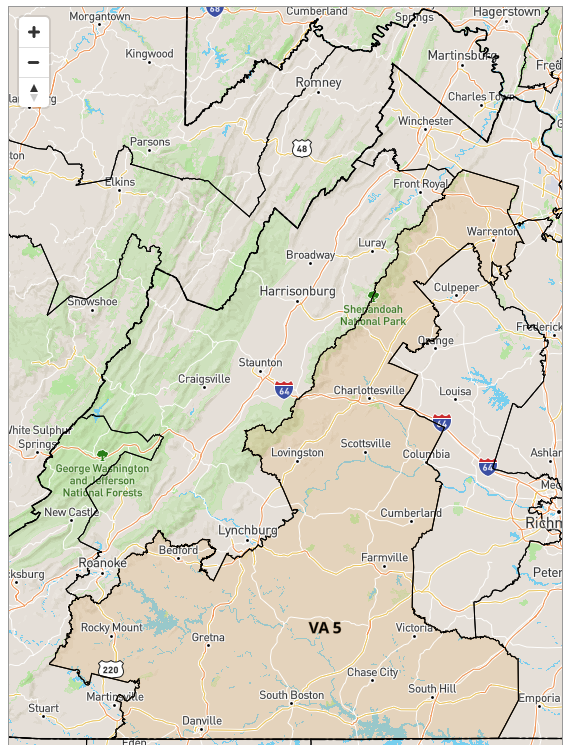 At a private campaign event in Nelson County, 5th Congressional District Republican candidate and self-described “biblical conservative” Bob Good stood before a crowd of about 40 supporters and delivered a fiery speech outlining his vision for the sprawling rural district.

“We are at war, and this is where we make our stand,” Good told the audience.

Good, a former Liberty University athletics official and former Campbell County supervisor with a background in banking and finance, is facing Democratic challenger Cameron Webb, a physician and public health director at the University of Virginia School of Medicine, in the general election.

The 5th Congressional District, which stretches from the North Carolina border to Fauquier County, is typically a safe Republican seat, but Webb has gained ground in recent polls and political analysts have recently rated the race a “toss-up.”

Speaking from the patio of the hunting lodge, Good told the audience that protecting gun rights  was among his top priorities as a candidate. Good railed against the new gun laws passed by the Virginia General Assembly this year, including universal background checks, “red flag” laws and the reinstated one-handgun-a-month law.

“We will accept no compromise on this issue,” Good said.

Van Cleave backed Good as “very strong on the Second Amendment.” He spoke in favor of lax gun laws and even speculated about the possibility of another American civil war occurring as a result of new gun policies.

“They really want a civil war, I think we’re all pretty clear on that,” Van Cleave said. “I hate the thought of that, it’s horrifying. But how else can you figure? They want to get rid of the law-and-order part. And what's left?”

Asked later whether Good agreed with Van Cleave’s statements that there was a possibility of violent conflict between political parties, Good said the "radical left" is “calling for it openly.”

“They’re calling for revolution. So, the threat is clearly to our democracy, to our republic, to our freedoms is coming from the radical left. I don’t see any evidence of a threat from the conservative side,” Good said.

Good also touted his support for law enforcement and his numerous endorsements from commonwealth’s attorneys and sheriffs in the 5th Congressional District. Good added that he increased the Campbell County Sheriff’s Office budget while serving on the Campbell County board.

Good has also thrown his weight behind the hard-line immigration policies of President Donald Trump and has called Trump “the best president of my lifetime.”

“I think we need to stop illegal immigration and have a merit-based immigration policy that puts Americans and American workers first,” Good said.

Good’s support for strict immigration policies was among the reasons he decided to challenge current Rep. Denver Riggleman in a Republican nominating convention. According to Good’s wife, Tracey Good, who spoke at a Fauquier Women for Good rally on Saturday, Riggleman’s vote against an annual appropriations bill that would have allocated additional funds for Trump’s border wall was a deciding moment for Good.

“Our sitting congressman had voted against the border wall that Trump wanted to put in,” she said, “affecting our children and our grandchildren.”

Intraparty tensions in the district flared in a bitterly contested Republican convention between Riggleman and Good in June. Good, who is a born-again evangelical Christian, criticized Riggleman for being “out of step” with the Republican Party on same-sex marriage, immigration and drug legalization. Good ultimately won the nomination with 58% of the vote.

Riggleman has declined to endorse either Good or Webb in the general election race.

Good is also a staunch supporter of anti-abortion policies and supports eliminating all federal funding of abortion-rights supporters and providers. He has said he will reject any attempts to pass any legislation affirming abortion rights.

“I think the number-one responsibility of government is to protect us and that includes those who cannot protect themselves, including precious life in the womb,” Good said.

Good spent as much time telling the audience about his opponent’s views as he did about his own, setting his agenda in sharp relief against the what he sees as the values of Webb and the Democratic Party.

Good said that Webb and the Democrats want to enact a “radical socialist agenda,” and told guests at the Nelson County rally that the Democratic Party wants to “disarm people” and “move us to a socialist-Marxist country.”

Webb responded in a statement by saying that he is “a strong supporter of the Second Amendment.”

“I don't believe any law-abiding gun owner should have to worry about their right to keep and bear arms. The best way to protect those rights is by keeping guns out of the hands of those who would harm themselves or others,” Webb said.

Good has also accused Webb of wanting to “defund the police.” In an advertisement released by the Congressional Leadership Fund, a Republican super PAC, Webb is quoted from an interview with a Charlottesville TV station about his position on the issue.

“So, those calls to defund the police, again, we need to use that language and we need to use it appropriately because those calls to defund the police, that’s not coming from nowhere,” Webb says in the ad. “That’s coming from a deeply rooted sense that hey, all of this extra spending on police is actually part of the problem on policing and over-policing.”

Webb said in a statement, however, that he does not support “defunding the police" and wants to ensure “police have the resources they need to do their jobs effectively.” Webb said he is also in favor of raising officer salaries and investing in training and mental health resources for officers.

“I do not support defunding the police. My father worked in law enforcement at the [U.S. Drug Enforcement Agency] for nearly 20 years, so I have a deep understanding of the importance of law enforcement and support for their critical work in keeping our communities safe,” Webb said.

Good also attacked Webb for his support for abortion rights and said that Webb wants “no restrictions on abortion at all up until the moment of birth,” and “even beyond.”

Webb responded by saying that Good was “creating a false framework for this discussion.” Webb added that, “As a Christian, I know that this is a deeply personal, emotional and nuanced issue.”

“No politician should dictate the decisions a person can make with their own body. I believe that those are decisions best made between a woman, her doctor and her faith,” Webb said.

Good has also pushed back against Webb’s appeals to bipartisanship in the 5th District. Good said in a recent interview that his opponent's effort to appeal to Republican and independent voters in the district is “talking without saying anything.”

And while Good said there may be some room for agreement between Democrats and Republicans on issues like infrastructure and broadband expansion, compromise on issues like law enforcement spending and gun policy was a non-starter.

“When the Democrat Party has been taken over and has gone so hard to the radical socialist left, I don’t want to go halfway there with them,” Good said. “That’s our republic. You try to elect people who believe what you do, and if you’re in the minority, then you’re the loyal opposition.”

Outside groups have funneled $2.5  million into media and advertising in the  5th  Congressi…

5th Congressional District Republican candidate Bob Good is a former Liberty University associate athletics director and was the chief fundraiser for the university’s athletic program. He worked at the university from 2005 until 2020, when he resigned to focus full-time on his congressional campaign.

Prior to working for Liberty University, Good worked for Citigroup for 15 years, primarily in the bank’s lending division. He started his career as a bank branch manager in Virginia Beach before moving to Wilmington, Delaware to become a training director, and then to Atlanta, Georgia where he served as a district manager for the bank.

Good grew up in north New Jersey, the second of four siblings. His family moved to Lynchburg, Virginia when he was 9 years old, when his father decided to attend Liberty University Baptist Theological Seminary.

Good attended Liberty Christian Academy as a teen where he joined the school’s wrestling team, ultimately going on to win a state wrestling championship. His athletic skill led to a partial scholarship at Liberty University where he graduated with a finance degree in 1988 and later a master's in business administration.

Good married his now-wife, Tracey Good, shortly after graduating from Liberty University. They have three children.

It is so sad and disturbing to read of statements of candidates alleging violent threats to our community on the basis of no evidence except “what else can you think.” Characterizing political opposition as “civil war” is uncivil rhetoric. If your policies and positions have no merit, promoting violence is not an answer.