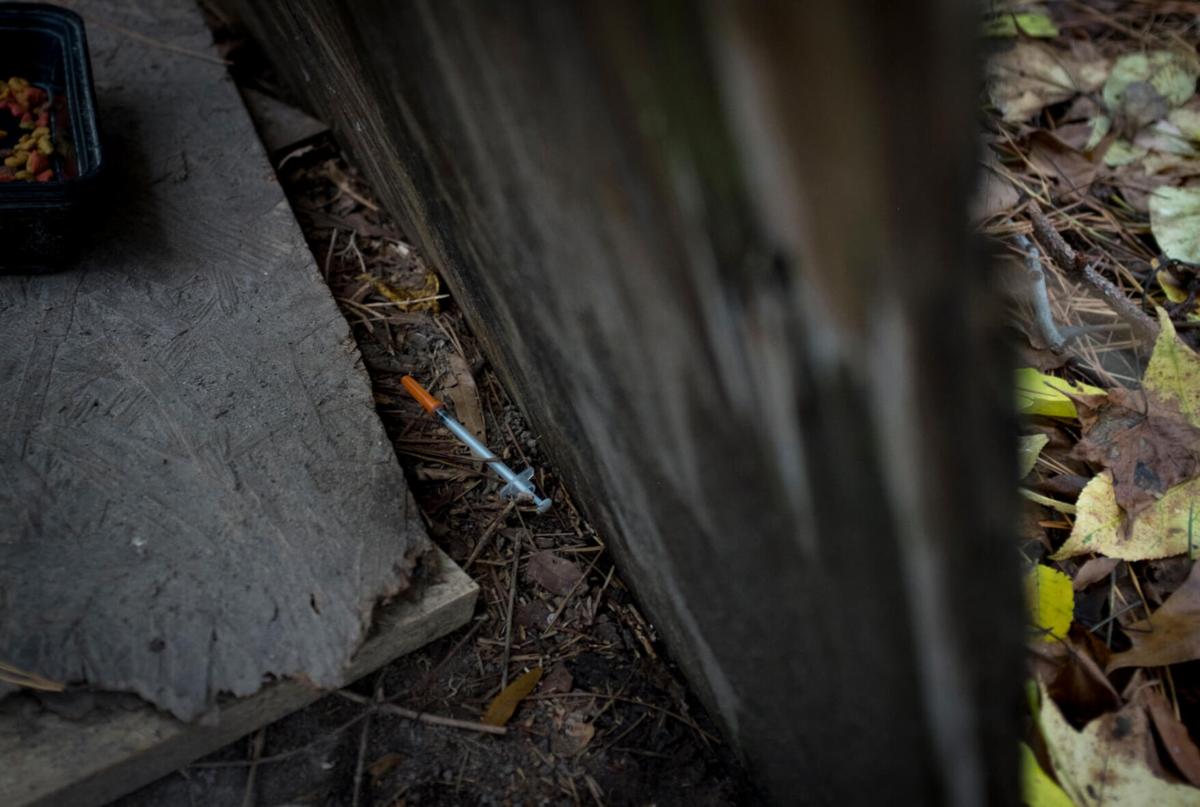 A needle used for heroin injection lies in the woods off Jeff Davis Highway in Richmond. 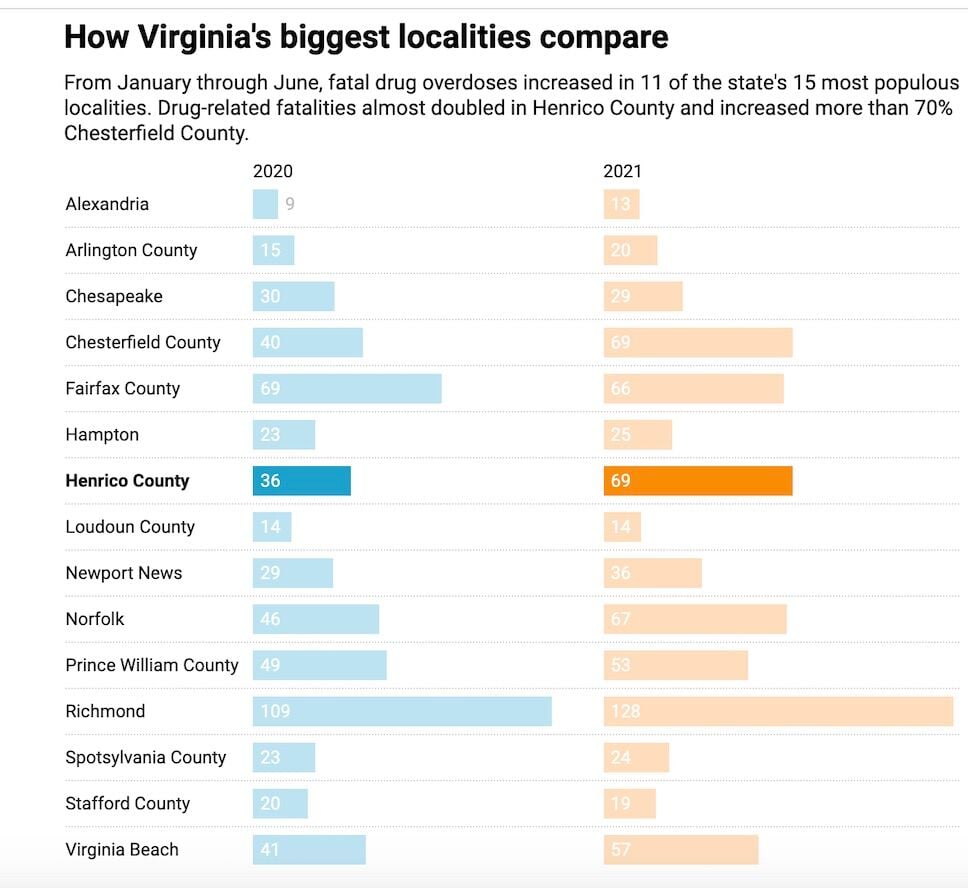 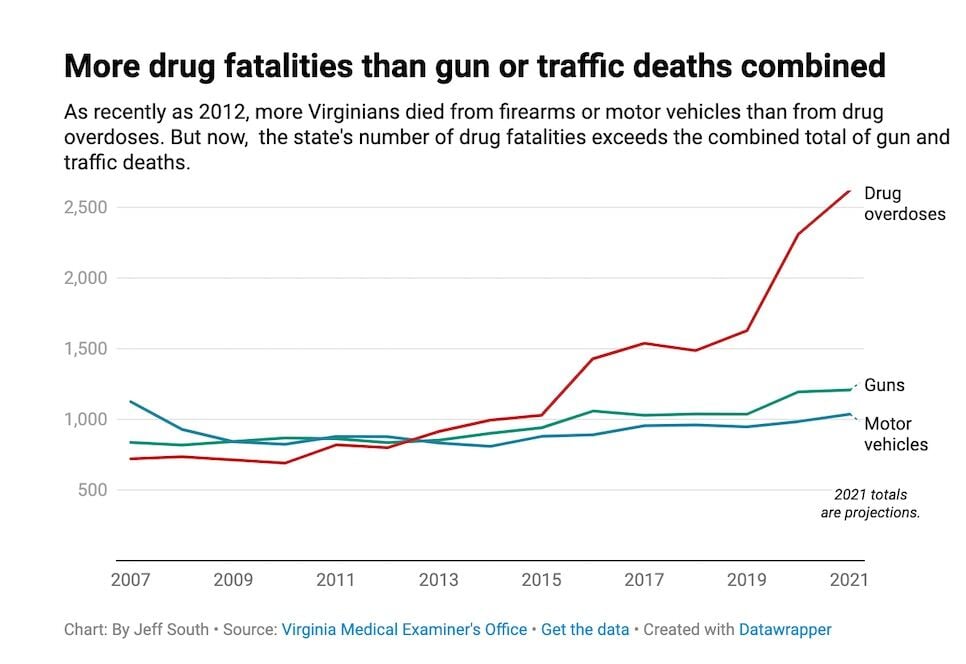 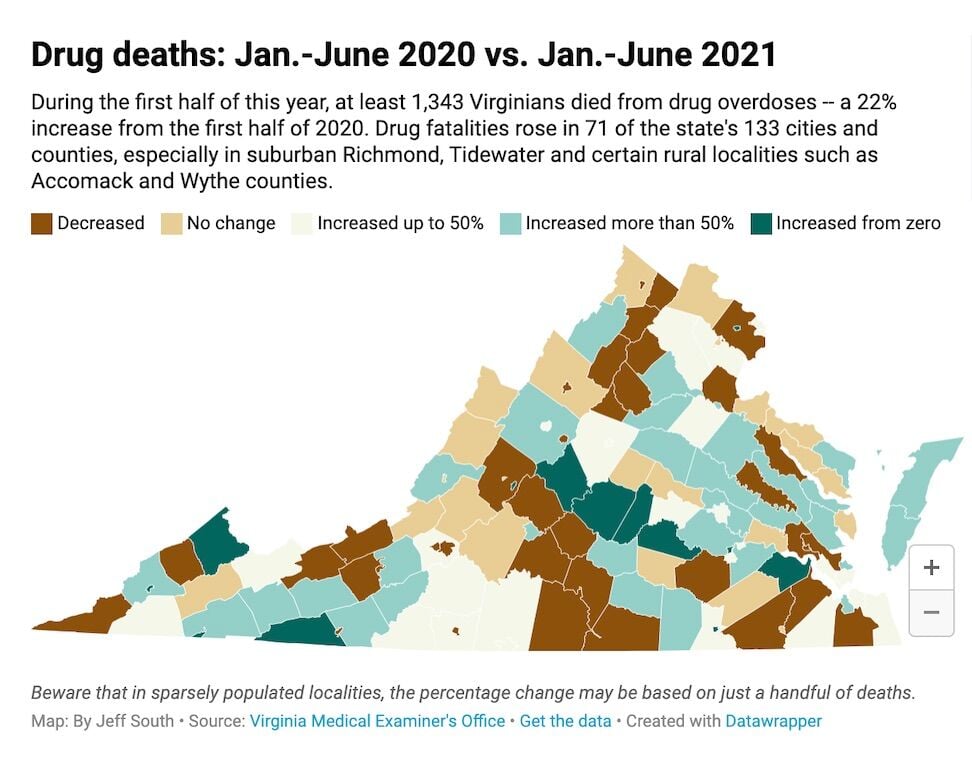 Virginia is headed toward another record number of drug overdose deaths, which experts blame on social isolation and stress associated with the COVID-19 pandemic and widespread trafficking of fentanyl, a powerful synthetic opioid.

Drug deaths in the commonwealth increased 22% during the first half of this year compared with the corresponding period of 2020, according to the latest report from the state medical examiner’s office.

The report projects that about 2,620 Virginians will die from overdoses of fentanyl, cocaine, heroin, prescription opioids, methamphetamine and other drugs in 2021 — a 13% increase from the previous year. And that comes after a 42% increase in fatal overdoses from 2019 to 2020.

“It’s kind of a terrifying time,” said Kathrin “Rosie” Hobron, the Virginia Department of Health’s statewide forensic epidemiologist, who compiled the statistics. “Until we control the fentanyl crisis, I just really don’t see our numbers going down at all.”

The rising number of drug deaths represents the continuation of a trend that started in 2010, when 690 Virginians died of drug overdoses. Back then, the state recorded about two drug fatalities a day. Now the average daily toll is more than seven.

In 2013, drug overdoses passed guns and motor vehicle collisions as the leading cause of “unnatural death” in Virginia. In 2020 and so far this year, drug fatalities have exceeded the combined total of firearm and traffic deaths.

“Opioids, specifically illicit fentanyl, have been the driving force behind the large increases in fatal overdoses since 2013,” Hobron noted in her most recent quarterly report. She said fentanyl, usually mixed with other drugs, caused or contributed to about three-fourths of all drug fatalities in Virginia.

In addition, there have been sharp increases in deaths involving cocaine and methamphetamine, the report said.

From January through June of this year, drug fatalities rose in 71 of the state’s 133 cities and counties, according to a Virginia Mercury analysis of data from the medical examiner’s office. Deaths jumped the most in:

• The Richmond area. In Henrico County, the number of drug deaths climbed from 36 during the first half of 2020 to 69 during the first half of this year. Fatalities went from 40 to 69 in Chesterfield County; from 12 to 20 in Hanover County; and from 109 to 128 in the city of Richmond. In Louisa County, on the western outskirts of the metropolitan area, deaths rose from two to 12. Prince George County, on the area’s southern fringe, saw fatalities go from three to 11.

• Tidewater. Fatal overdoses more than doubled, from 21 to 44, in Portsmouth. Deaths increased from 46 to 67 in Norfolk, and from 41 to 57 in Virginia Beach.

Of the state’s 15 most populous cities and counties, most have had increases in overdose deaths this year.

Hobron has compared notes with officials in other states, where drug fatalities also have risen. “Everyone has been seeing the same thing,” she said.

Drug fatalities in Virginia increased 36% after COVID-19 hit, according to the NCHS, which is part of the U.S. Centers for Disease Control and Prevention. More than 2,260 Virginia residents died from drug overdoses during the 12 months ending in April.

Only 14 states had a bigger percentage increase than Virginia, the NCHS data showed. They included three of Virginia’s neighbors — West Virginia (up 62%, Kentucky (up 54%) and Tennessee (up 50%).

Causes: Deadly fentanyl and fallout from the virus

Experts attributed the rising number of fatal overdoses to two factors: the increasing availability of illicit drugs, especially fentanyl, and the impact of the COVID-19 pandemic on people struggling with addiction.

“Today, drug cartels in Mexico are mass-producing fentanyl and methamphetamine largely sourced from chemicals in China, and they’re distributing these substances throughout the United States,” Anne Milgram, administrator of the U.S. Drug Enforcement Administration, said during a conference call with reporters Wednesday.

She said the amount of illegal fentanyl flooding the U.S. is unprecedented.

“This year alone, DEA has seized enough fentanyl to provide every member of the United States population with a lethal dose, and we are still seizing more fentanyl each and every day,” Milgram said.

Milgram said fentanyl, which officials say is about 100 times more potent than morphine, is being mixed with other drugs such as cocaine, heroin, marijuana and methamphetamine.

“And drug traffickers and networks are flooding our communities with fentanyl and methamphetamine in the form of fake, counterfeit prescription pills. These pills are made and marketed to purposefully deceive Americans into thinking that they are real prescription medications, but they are not. In reality, they are potentially deadly drugs.”

So far this year, law enforcement agencies have seized more than 14 million of those fake pills, which Milgram said are offered for sale on the internet.

Besides fentanyl, the COVID-19 pandemic may have contributed to the increase in overdose deaths, said Joseph Kertis, who works for Addicted.org, a substance use resource organization that maintains a directory of outpatient and residential drug rehabilitation services in Virginia and other states.

“Our strategies for preventing COVID-19, such as self-isolation and social distancing — while life-saving in terms of the virus — have been detrimental to people who struggle with addiction,” he said.

“Connection is the opposite of addiction. Isolation fosters addiction. People (with addiction problems) get better when they are connected with others.”

Early in the pandemic, Kertis said, some people who were receiving methadone and Suboxone as treatment for opioid addiction had difficulty getting those medications. Because of social distancing requirements, “people couldn’t line up for pills,” and it took a while for clinics to develop COVID-safe methods for distributing addiction treatment medications.

In addition, Kertis said, groups such as Alcoholics Anonymous and Narcotics Anonymous had to stop meeting in person, and that undercut the support needed by many people in recovery.

Moreover, the pandemic had a financial impact on people who lost their jobs and a psychological impact associated with the fear of contracting the coronavirus.

Faced with those stress factors, “people have a tendency to self-medicate, especially when they are cut off from other resources,” said Kertis, who has worked in the addiction treatment field for the past decade and served as clinical director of a drug and alcohol rehabilitation center.

All of those circumstances may have led people who had been in recovery to relapse, or for other people to start using drugs.

With vaccines, life is starting to get back to normal. For example, AA and NA groups are meeting in person now. But because of the hold that drugs can have on a person’s life, that might not result in an immediate decrease in people who have developed addictions.

“Just because the environment changes, they necessarily don’t,” Kertis said.

Kertis said he would like to see the nation “attack the drug addiction epidemic with the same intensity that it has gone after the COVID-19 pandemic. They’re both public health crises.” That would mean providing widespread treatment and resources for addictions, he said.