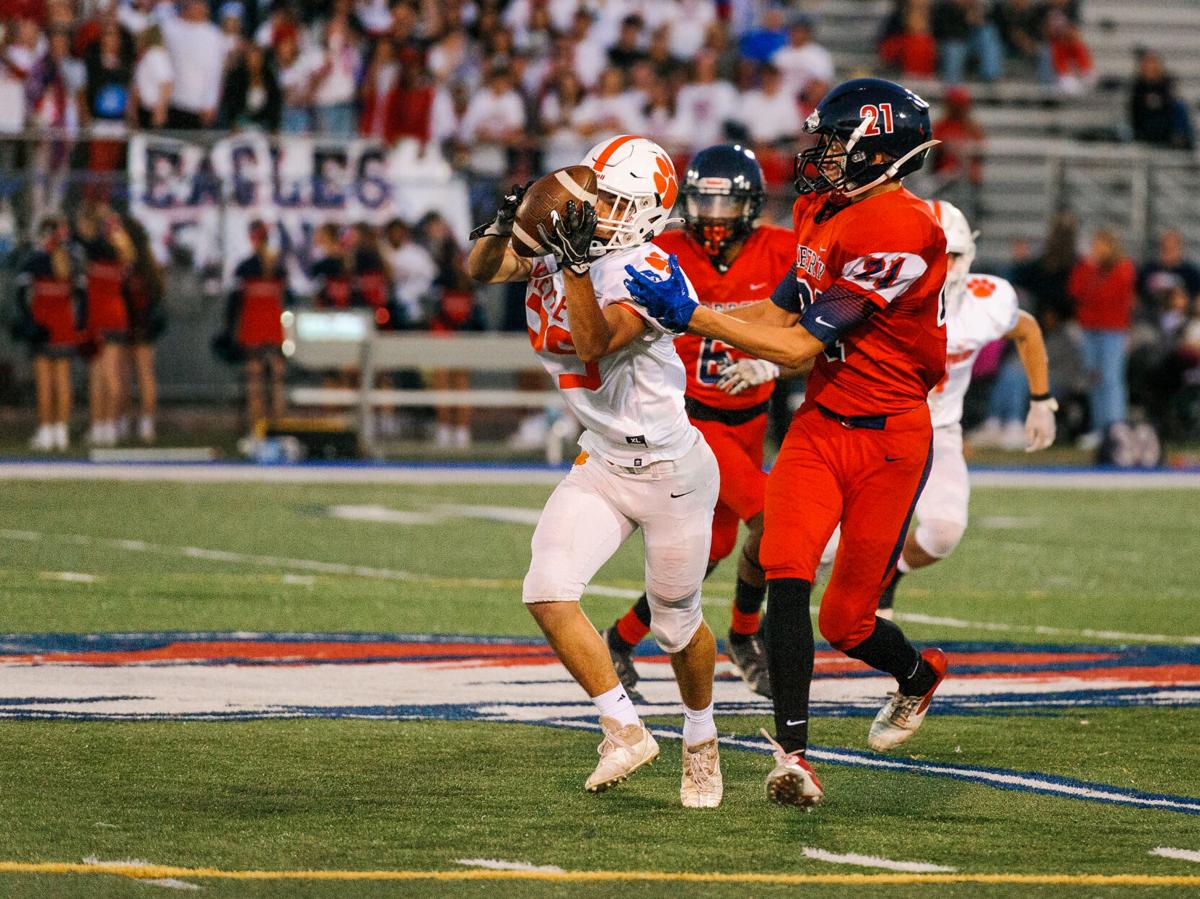 Kettle Run cornerback Kamran Dicolantonio cut in front of a Liberty receiver to pick off this pass and race 47 yards for the first points in Friday’s 35-9 win in Bealeton. 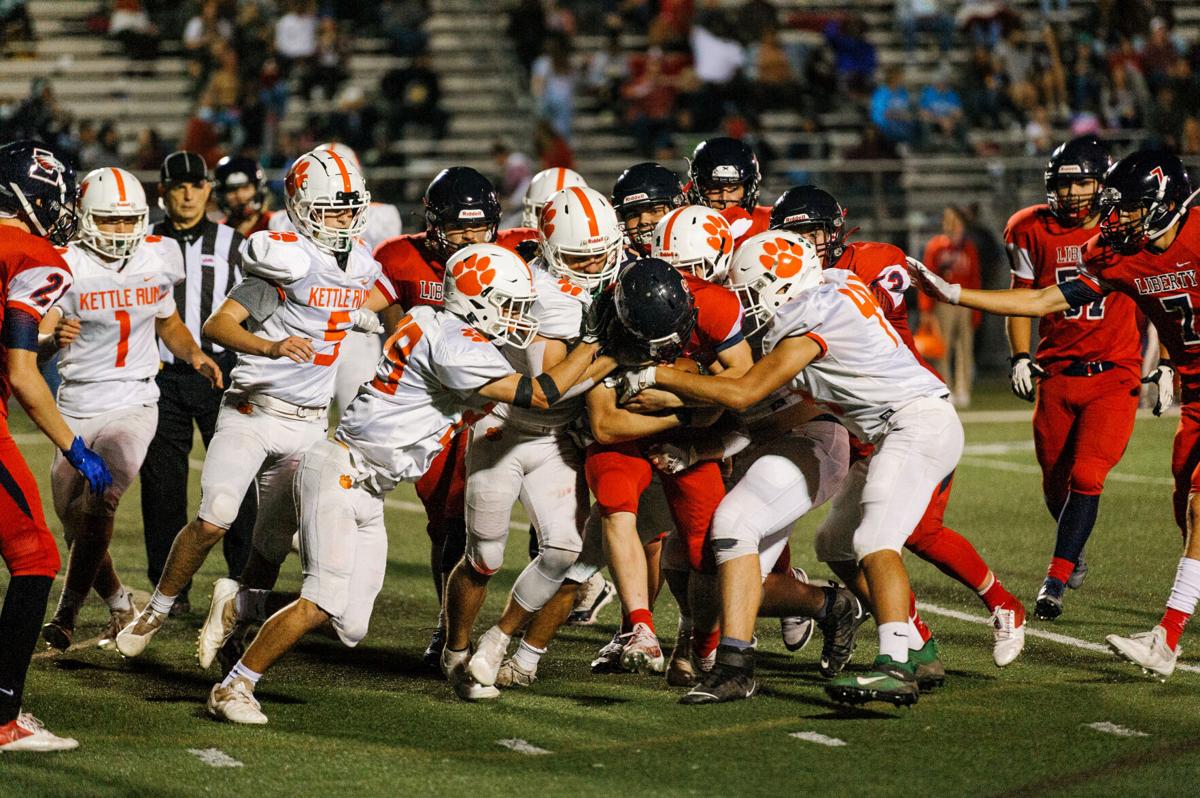 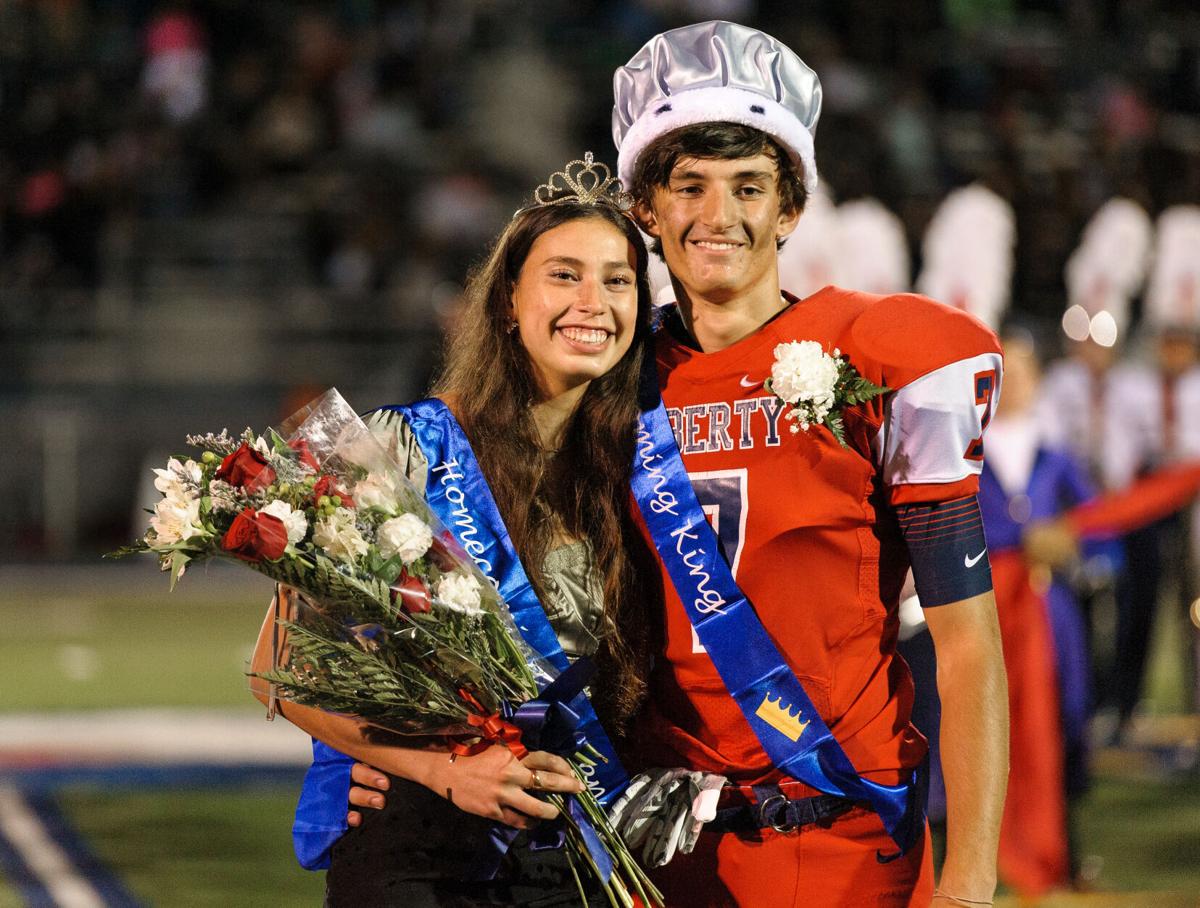 Kettle Run cornerback Kamran Dicolantonio cut in front of a Liberty receiver to pick off this pass and race 47 yards for the first points in Friday’s 35-9 win in Bealeton.

The renewal of the Liberty-Kettle Run football rivalry -- the 16th meeting between the county powers -- saw both teams looking their best for Liberty’s Homecoming in Bealeton.

The game featured strong defense, with Kettle Run (5-1 overall, 2-0 district) pulling away in the second half to win 35-9.

The 26-point margin represented Kettle Run’s biggest win in the rivalry and their second win in a row over the Eagles this year. Kettle Run downed Liberty 26-7 in April as part of the delayed 2020 season. Liberty still leads the series 10-6.

Liberty fell to 0-4 for the first time since 1999, but showed signs of progress, playing smash-mouth defense against the reigning Northwestern District champion Cougars, who have a deep and experienced team.

“We knew it would be a physical game. The message we imparted to the kids is that it will be a battle of county schools and it will be a tough game,” said Kettle Run coach Charlie Porterfield.

Kettle Run mustered just one offensive touchdown in the first half as the Eagles stopped the Cougars’ first four drives.

Three Cougars who don’t normally score found the end zone for the second straight week, reprising their roles from a week earlier in a 42-28 win over James Wood.

It came after the Eagles had stopped the Cougars’ first two drives. On second down Dinicolantonio stepped in front of a Liberty pass in the right flat intended for Joey Triplett, controlled it and raced 47 yards up the sideline to make it 7-0 with 7:40 left in the first quarter.

“It’s rare. I’m trying to think if I’ve ever seen it before,” said Porterfield. “I’ve seen a guy return two punts for touchdowns in two games but not a pick-six twice in a row. Kam played it well. He broke on the ball and jumped the play.”

The teams continued to stymie each other offensively until shortly before halftime when Eagle quarterback Austin Mawyer connected with Joey Triplett on a deep route, good for 45 yards to the Kettle Run 3-yard line.

Three failed attempts to punch it in led to Nick Paratore’s 27-yard field goal, making it 7-3 with 2:38 left before halftime.

Taking over on their own 23, Kettle Run drove 77 yards in two minutes to make it 14-3 as Beau Lang scrambled and threw a dart to tight end Abram Chumley, who made a tough catch in the back of the end zone under tight coverage.

Like Dinicolantonio, Chumley also scored the previous week with a great catch. Porterfield noted that Chumley, a junior who starts at defensive end, is closing in on the school sack record.

Now his offense is opening eyes.

“He’s a Chumley, we expect him to be a great player,” said Porterfield, referencing Abam’s older brothers Casen, Gabe and Elijah who were Cougar superstars. “We knew Abam could handle the blocking assignment but we’re incredibly impressed with his receiving ability.”

Despite playing tough defense, Liberty had problems on offense as the Cougars scored three second half TDs to put the game away.

Liberty’s Colby Lewis recovered a fumble on the Kettle Run 25 to open the third, but after Cody Owens’ reached the Cougar 13 on a six-yard run, the drive stalled, leading to a missed 32-yard field goal attempt.

Kettle Run embarked on an 80-yard TD drive, which produced a one-yard TD run by Beau Lang on fourth down, which made it 21-3 with 1:27 left in the third.

With Peyton Mehaffey out due to injury suffered against James Wood, Quaker has looked dynamic.

“We have a stable of running backs in Strickland, Mehaffey, Logan Branham and Quaker. All are linebackers as well. We can space the carries out,” Porterfield said.

Liberty added a late TD on a four-yard TD run by Owens with 23 seconds left.