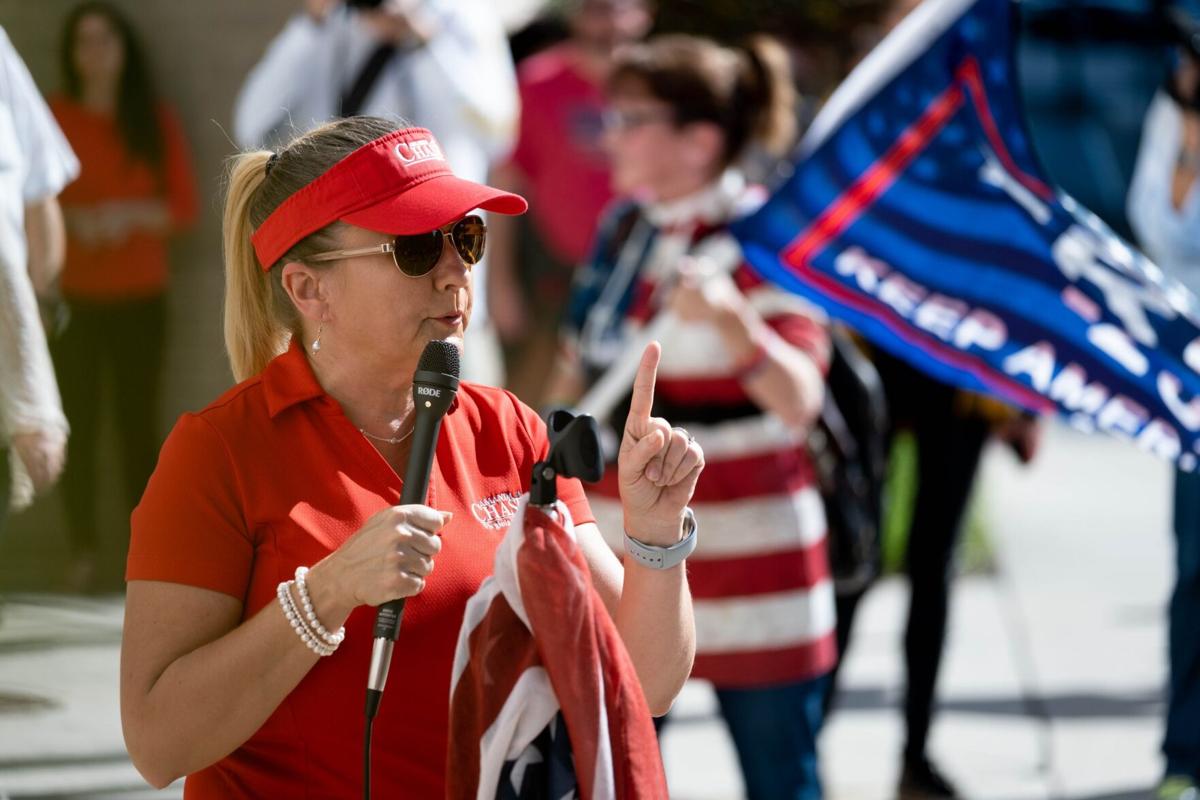 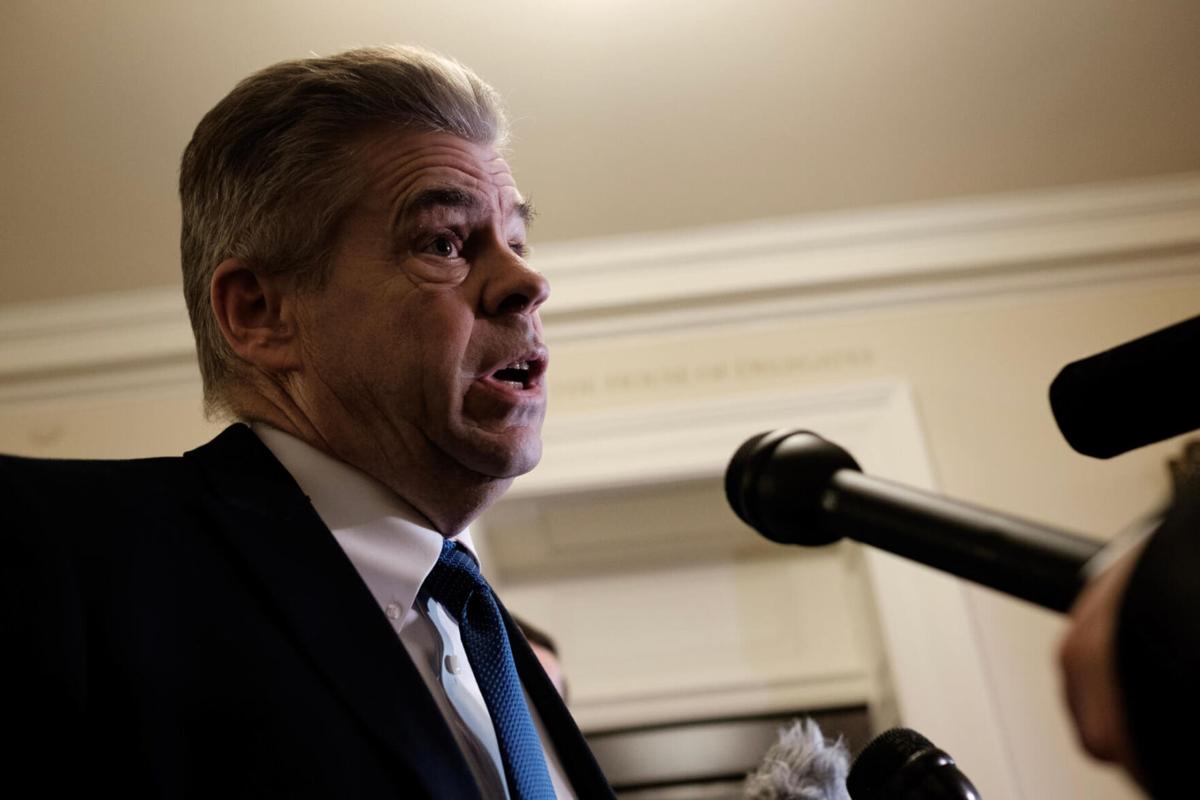 Del. Kirk Cox, R-Chesterfield, addressed reporters outside of his office in the Capitol in 2019 during his term as speaker.

Courtesy of the Virginia Mercury

Virginia Republicans decided Saturday to choose their nominees for statewide office via a convention instead of an open primary, setting up the possibility that Sen. Amanda Chase, R-Chesterfield, will run in the general election as an independent challenger.

Chase, one of two announced GOP candidates for governor, has made her opposition to the Republican establishment a theme of her hard-right campaign, warning her supporters that party leaders would rig a convention against her.

“Over the past decade, I’ve seen too many of our grassroots candidates get cheated by the Republican establishment elite and political consultants who control these Republican conventions and I refuse to be another casualty,” Chase wrote in a Facebook post Saturday morning before the meeting of the GOP’s State Central Committee, reminding her supporters of her plan to run as an independent if party leaders opted for a convention.

An independent run by Chase would almost certainly hurt the GOP’s chances in the general election, a point Chase acknowledged, writing that the party “has known since February that I will only run in a primary. If a convention is chosen, it will be the (Republican Party of Virginia) that splits the vote.”

The debate Saturday turned conventional wisdom about the benefits of primaries versus conventions on its head.

In the past, some members of the party have advocated for primaries,  believing a candidate chosen by a broader swath of the electorate would have a better chance at winning in the general election. Conventions, in which only the party’s most dedicated members and activists participate, are typically viewed as more likely to nominate further right candidates less palatable to moderate and swing voters. (See the 2012 procedural battle between Ken Cuccinelli and Bill Bolling.)

In that sense, Chase — who has embraced a Trump-like persona, spread conspiracy theories about widespread election fraud and claimed Virginia Democrats “hate white people” — might be expected to favor a convention.

But Chase, who was booted from her local GOP committee for endorsing an independent for sheriff in Chesterfield, has long been at odds with the Republican establishment, railing against GOP leaders in her stump speeches.

On the flip side, some of Chase’s opponents had argued for a convention because they didn’t believe Chase would be able to amass enough support to meet the 51 percent threshold necessary to win a convention. In a crowded primary, however, they believed she could become the nominee by winning just 30 to 35 percent of the vote.

“The @VA_GOP is a raging dumpster fire. A convention for statewide office… Really?... We’ve seen how this ends. Follow the money, corruption and the grift and there’s your GOP Governor candidate. And we wonder why @vademocrats keeps kicking the GOP’s ass in every election cycle.”

“I fear that candidate will go into the general election in a very, very weak position,” said Mike Ginsberg, a committee member who has spearheaded efforts to win back suburbs where Trump and past Virginia candidates to run in his mold have repelled voters. Without invoking Chase by name, he said that he typically favored primaries but said this year the choice was causing him anguish. “The only way we are going to get a candidate that commands support of the breadth of the Republican party is a convention.”

Del. Kirk Cox, R-Colonial Heights, the former Speaker of the House of Delegates and the only other announced GOP gubernatorial candidate, expressed no preference for a convention or a primary, saying in a statement after the vote that he considered it improper for a candidate to weigh in on the decision.

“Amanda Chase’s antics have long grown more than tiresome,” he said. “Her threat to run as an independent is based solely on the fact that she knows principled, conservative Republicans will never tolerate the demagogue she has become.”

A handful of other Republicans are considering entering the race, including Sen. Emmett Hanger, R-Augusta, and two businessmen, Pete Snyder and Glenn Youngkin.

While Chase’s candidacy loomed over the decision, members of the central committee weighed a variety of factors. Some members argued a primary would be easier to hold given uncertainty surrounding the pandemic. They also suggested it would also allow more members of the party, including students and people who work on weekends, to participate.

Supporters of conventions cited Democrats’ efforts to ease access to voting, with some echoing Trump’s baseless claims of widespread election fraud as they questioned whether the results might be tainted or manipulated by the opposing party. They generally agreed that it was unlikely the event would be held in person given the pandemic and discussed but have not finalized plans to allow the event to be held virtually via an “unassembled convention,” which the state GOP utilized earlier this year to elect new State Chairman Rich Anderson.

The decision to hold a convention — in whatever format — drew immediate criticism from more moderate voices in the party, including outgoing U.S. Rep. Denver Riggleman, who lost the GOP nomination to run for reelection earlier this year after his local GOP committee, some members of which were upset that he officiated a same-sex wedding, successfully pushed for a convention over a primary.

“The @VA_GOP is a raging dumpster fire. A convention for statewide office… Really?” he tweeted. “We’ve seen how this ends. Follow the money, corruption and the grift and there’s your GOP Governor candidate. And we wonder why @vademocrats keeps kicking the GOP’s ass in every election cycle.”

Chase, meanwhile, affirmed in a Facebook post after the final vote, “It’s official. While I am a Republican; I will be seeking the nomination in a primary as an Independent.”

Independents do not run in primaries. Asked what she meant by her statement, she said in a text message, “Actually they run in the general election. That method is called a primary.”