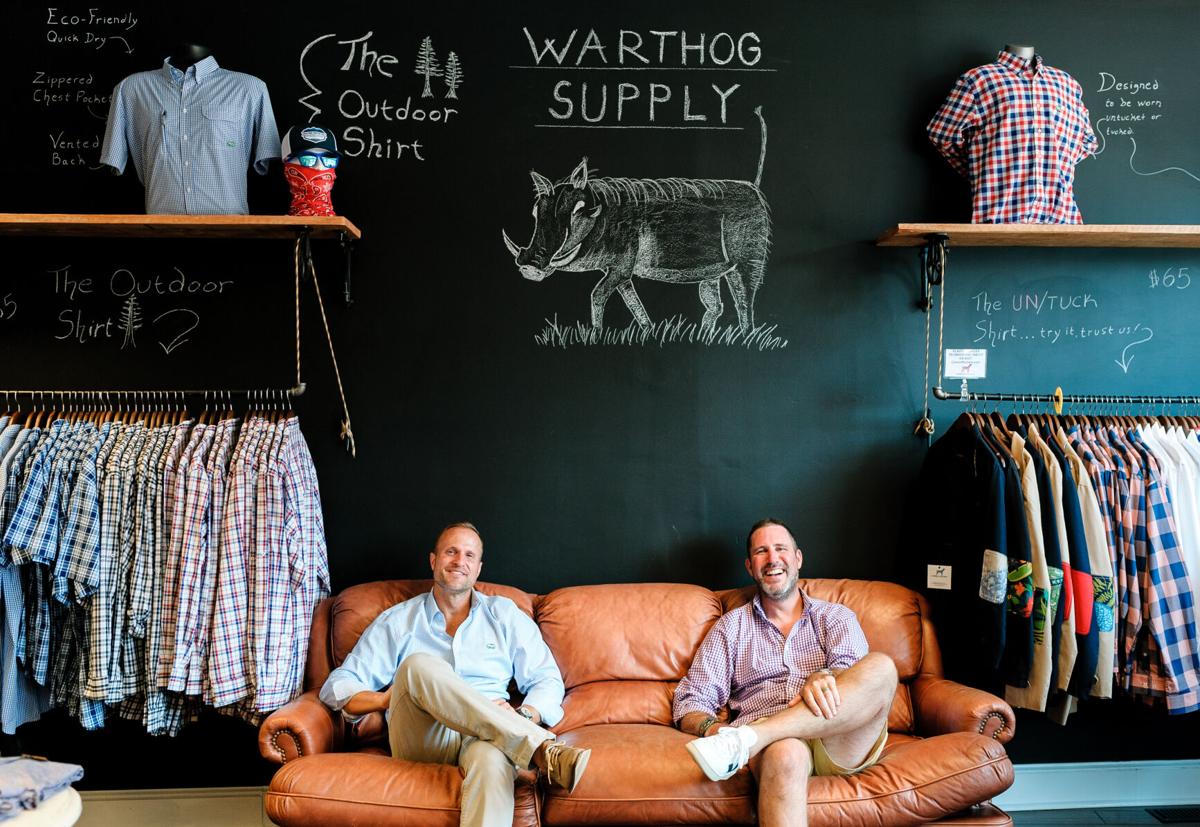 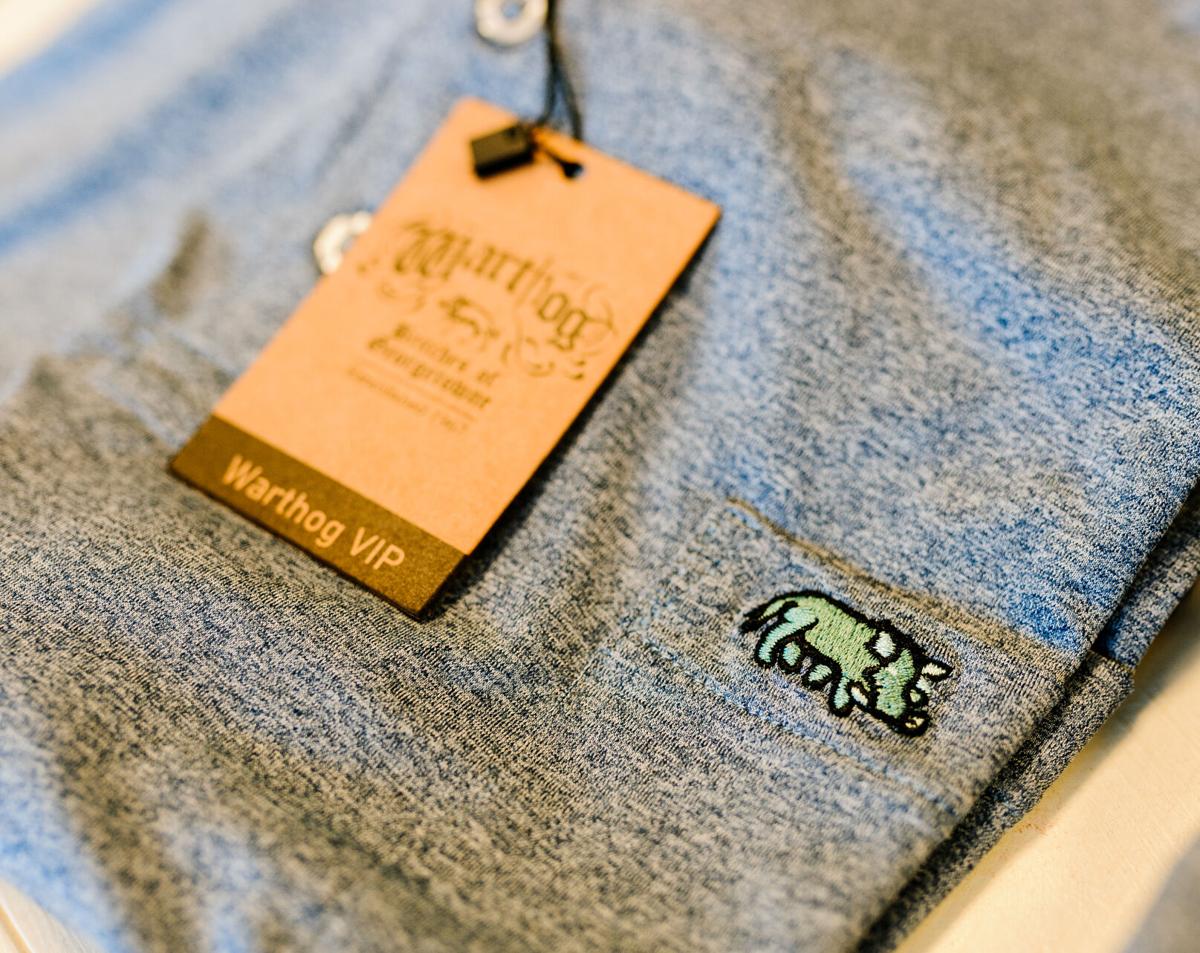 The Britches warthog logo is emblazoned on a shirt displayed at Britches Great Outdoors. 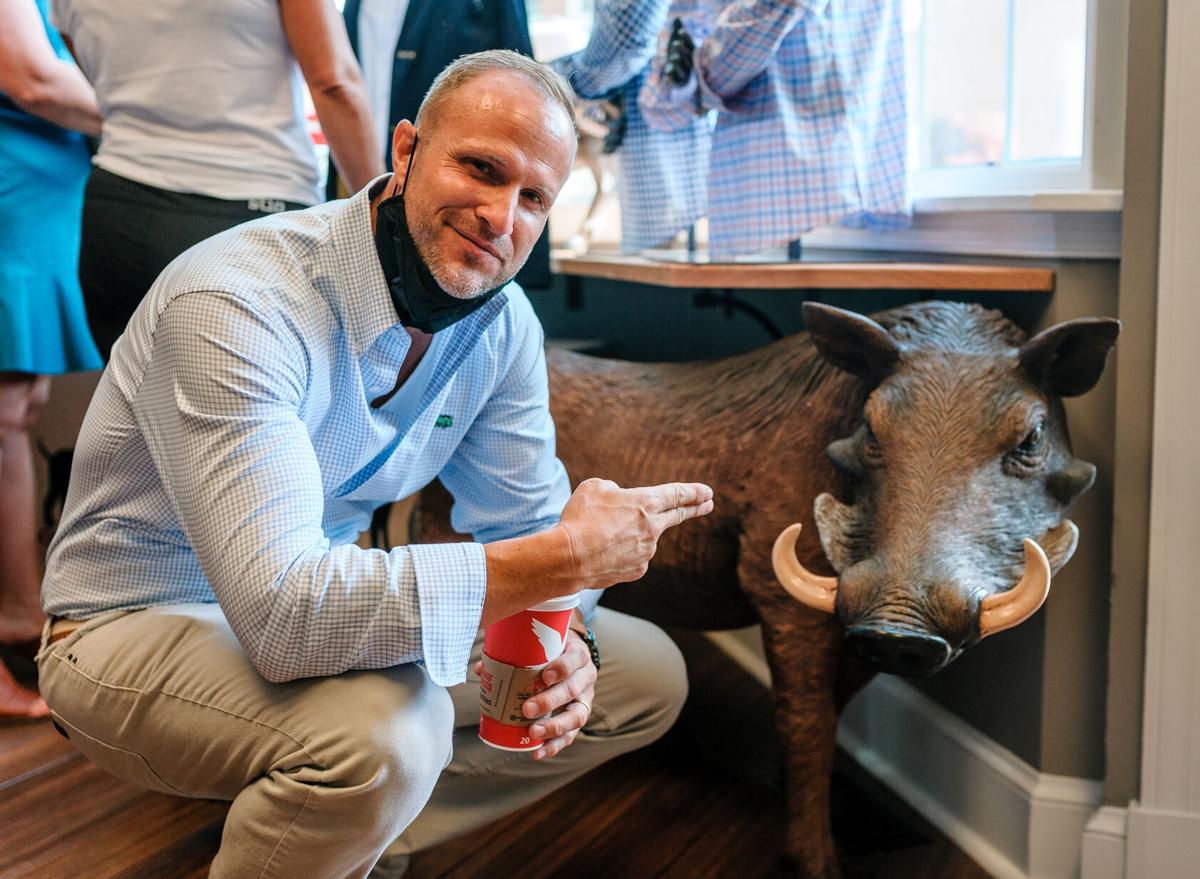 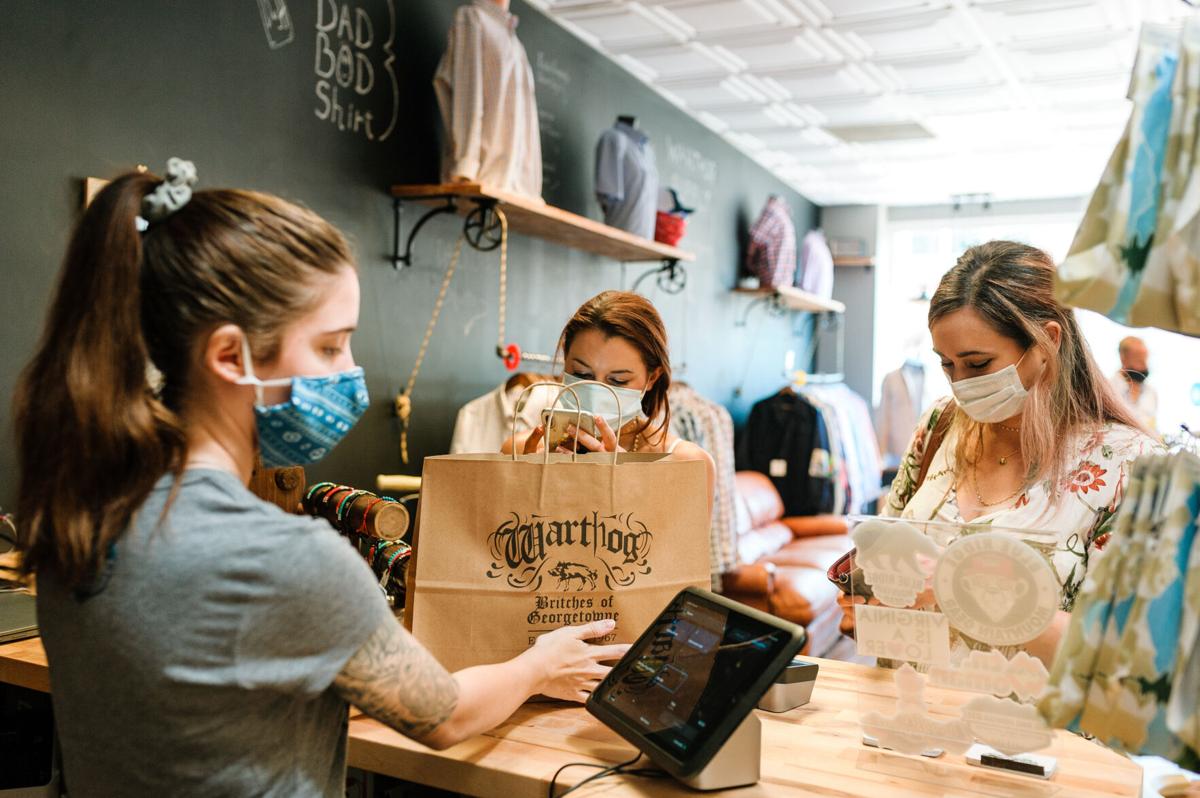 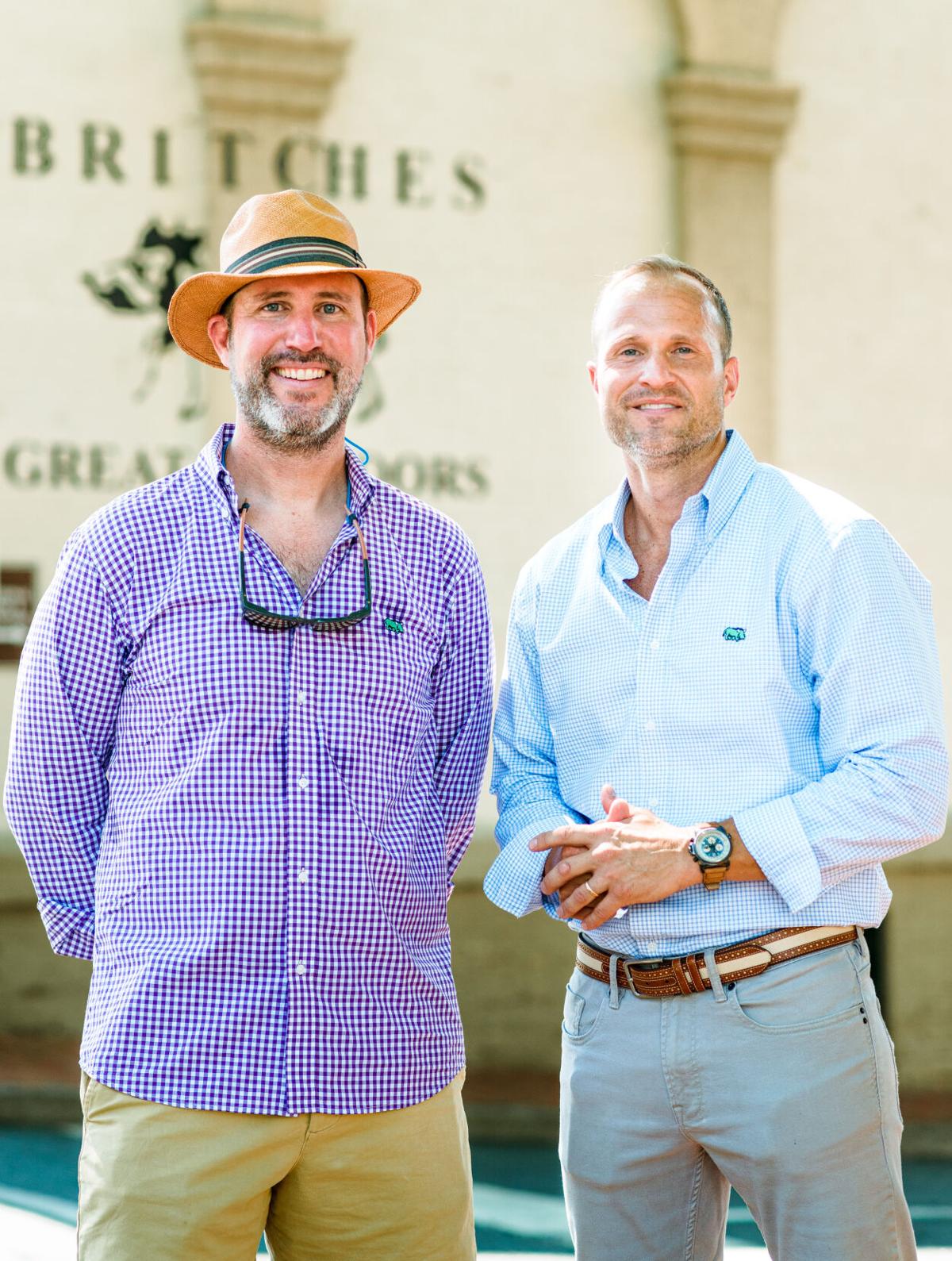 Britches Great Outdoors co-owners Matt Carson and Steve Sutherland pose in front a mural on the side of their shop facing Culpeper Street.

“It wasn’t timing. It was passion,” said Matt Carson Thursday morning. An hour earlier, his new shop, Britches Great Outdoors, opened its doors. He said his love for the brand as a teenager meant that he jumped at the chance to revive the clothing line in his hometown.

With a new storefront at the corner of Main and Culpeper Streets, Carson, along with his business partner, childhood friend and fellow Warrenton native Steve Sutherland, are reviving the Britches clothing brand and the iconic warthog logo.

The Britches name dates back to 1967, but the spinoff brand – the one with the warthog – was the clothing line both men loved in the 1980s. The pair hopes the Warrenton shop will be the first of several stores located around the state, especially in college towns.

“We want to revive the original items. It’s not just about the logo. It’s bottom-up rebuilding what made it great originally,” Carson said. All of the brand’s clothing is made from 100% organic American cotton. “We’re working with the mills to bring back that hearty, old-school fabric,” he explained. “There is a rabid, rabid [Britches] fan base, and that pushes us to honor the tradition.”

Britches Great Outdoors is a spinoff of Britches of Georgetowne, a formal menswear brand founded 1967. The Great Outdoors brand – usually shortened to “Britches Warthog” - Carson explained, featured a more casual look that mirrored the animal-branded preppy style that was ubiquitous in the 1980s. At the same time, the brand never took itself too seriously.

“Britches co-founder Rick Hindin decided to put the ugliest animal he could think of on a shirt and the iconic Warthog was born, along with the slogan ‘Only beautiful to another Warthog,’” the Warrenton store’s website explains.

“Warthog became the anti-brand,” Carson elaborated. What started as a joke soon became a phenomenon and a brand that defined Carson’s teenage years – along with many of his peers - in the 1980s. By the early 2000s, however, Britches had been sold off and eventually shuttered.

About a year ago, a mutual friend introduced Carson to Hindin, and within days they worked out a deal to revive the brand. Licensing rights in hand, Carson then set out to create a physical storefront in Warrenton. After the success of a 12-day pop-up store late last year, the store was originally slated to open in March, but delays in the supply chain due to the pandemic pushed the opening back to this week.

The store itself and the products in it are steeped in nostalgia. Cans of Tab soda are displayed in the front window. A table inside displays rows of “old-school 80s fleece” pullovers. There’s a 1984 Yamaha motorcycle next to the register.

Like the Britches Warthog brand, Matt Carson and Sutherland don’t take themselves particularly seriously. The writing above one rack of shirts touts the fit as “designed for the modern dad bod.” There’s a life-sized statue of a warthog at the store entrance; her name is Estelle. The two childhood friends rib each other incessantly and revel in stories about their youth; Carson once broke Sutherland’s arm during an especially rowdy childhood football practice, for instance.

As he emphasized, the timing of Carson’s push to revive the Britches brand had little to do with current trends – “I didn’t do a market study, I didn’t do any spreadsheets. I just went 100 m.p.h.,” he said – but it doesn’t hurt that 1980s fashion is a major influence on current trends.

As if to emphasize the point, Kaitlyn Yonts, of Gainesville, and Lauren Cunningham, of Warrenton, browsed the store Thursday morning and gushed over the 1980s-style windbreakers. They each bought one. Both women are in their twenties, and neither was alive in the 1980s.

“Heather kind of sold it to us as the place for back-in-the-day Georgetown,” Yonts explained of a previous conversation with Heather Carson, Matt’s wife. “So I’m like, ‘Vintage Georgetown vibes? Yeah!’”

This is not first experience in the clothing industry, however, and far from his first attempt at building a successful business in Warrenton. About a decade ago he co-founded a line of blazers called Carson & Machete which, according to the brand’s tagline, is “solving the lack of funk in blazering.” The custom blazers are available for order in the Main Street shop.

Carson said he didn’t think twice about opening the shop in Warrenton. “Having grown up here, for one, it’s home. And my other businesses are here; it’s a great place to do business,” he said. “I’m a believer that if you create a good business, a good product, you can make it anywhere.”

He talked about the scores of people who travel from the Washington, D.C. region to the mountains and rivers west of Warrenton. He hopes that having “destination” shops in Old Town Warrenton will encourage those day-trippers to spend time and money in downtown instead of simply driving past on the bypass.

“I hope this is part of the resurgence of an old town,” Carson said as he spoke about the combination of walking, shopping and dining opportunities one can enjoy in an historic downtown. “That’s what old towns can offer than no other place can,” he said, turning to look down Main Street. “This can’t be beat.”

Sutherland added that in his view, Warrenton has gradually evolved toward being a place where people can work, shop and live, creating a more self-sustaining local economy. “I think there was a belief in the past that that wasn’t possible. But I think that’s changing,” he said. “Warrenton has done a great job in moving in that direction.”

Carson said in some ways, the pandemic has moved the town in what he thinks is a good direction, especially in Old Town. He cited in particular the popularity of the outdoor seating now available outside Main Street restaurants. “Especially now, with this vibe, eating outside, people love it.”