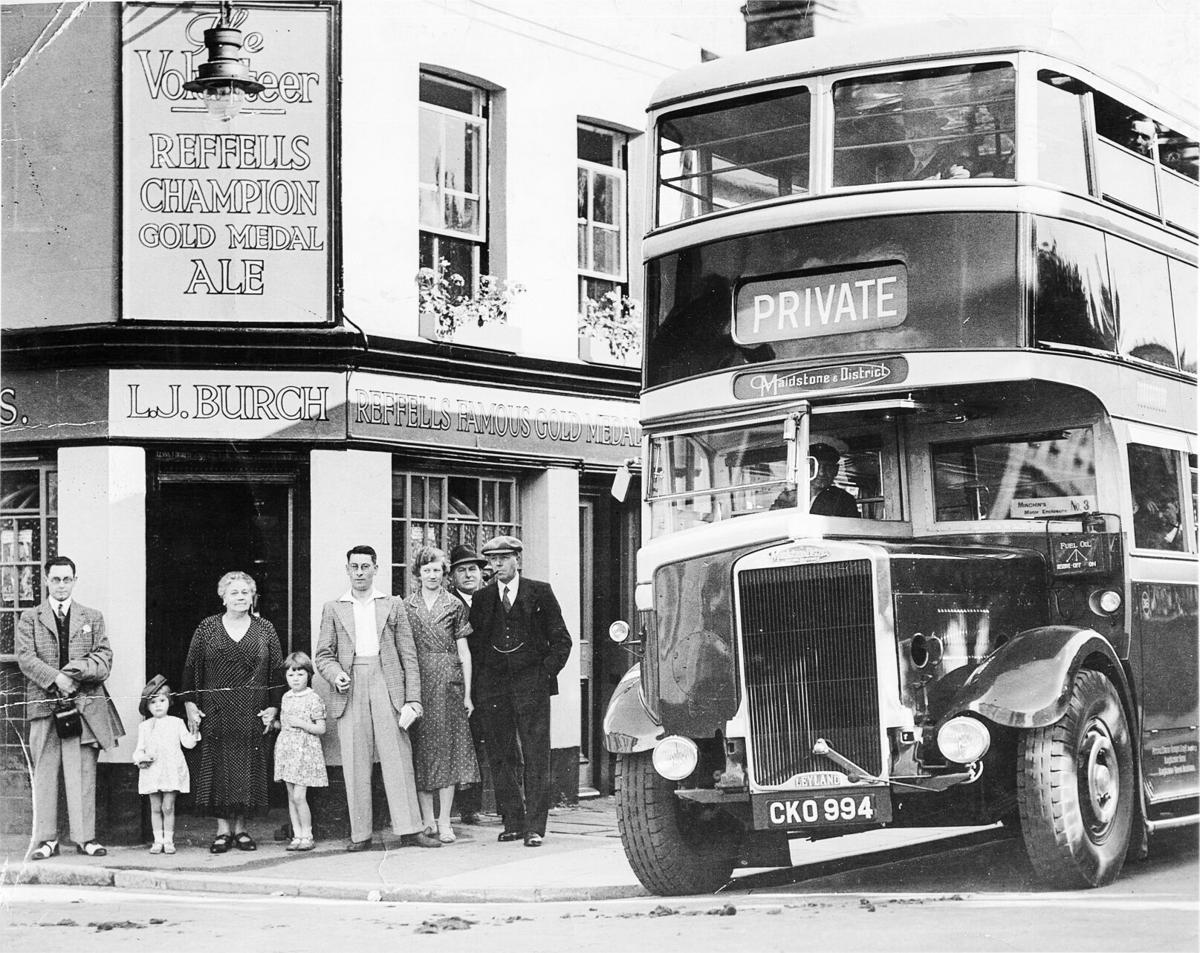 Nancy Burch, (second from left) age 4, with her family in front of the pub in where she was born. In the photo are her uncle, her paternal grandmother her sister, 6 years old, her father, mother, a pub customer and her maternal grandfather. 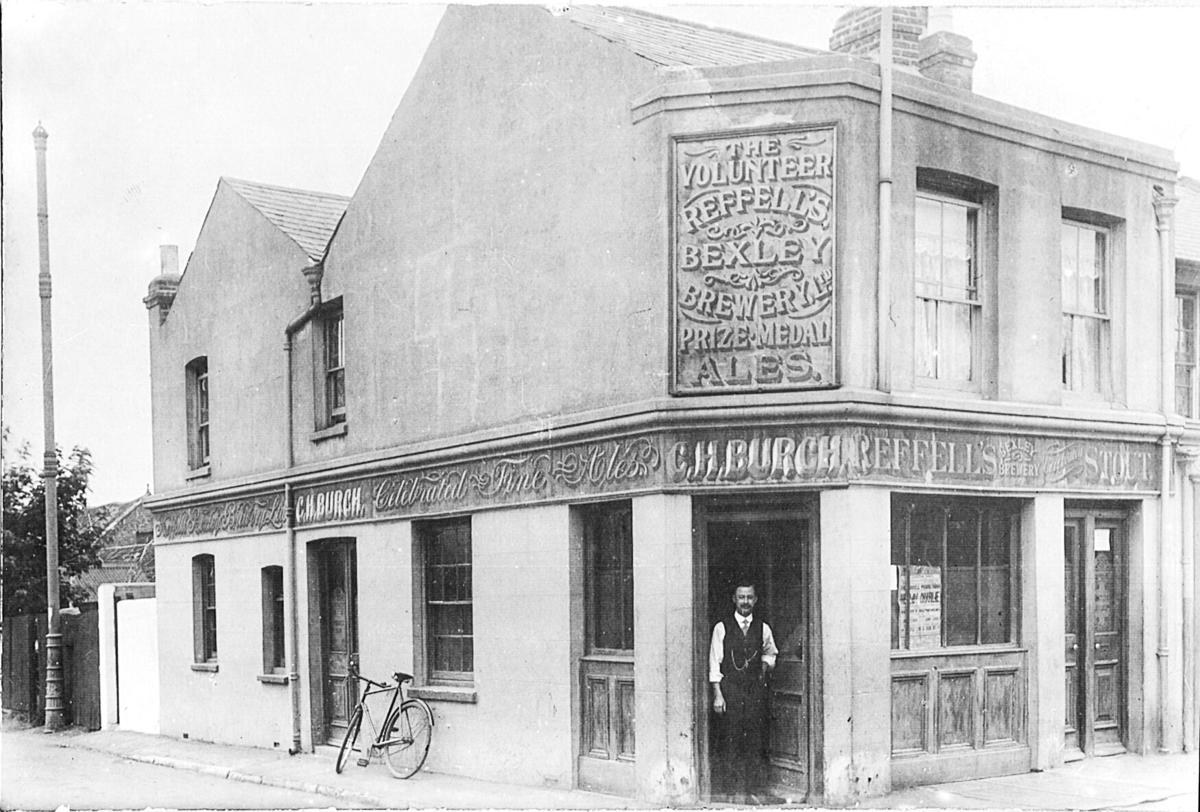 Nancy Burch’s grandfather, whom she never met, stands outside the family pub. 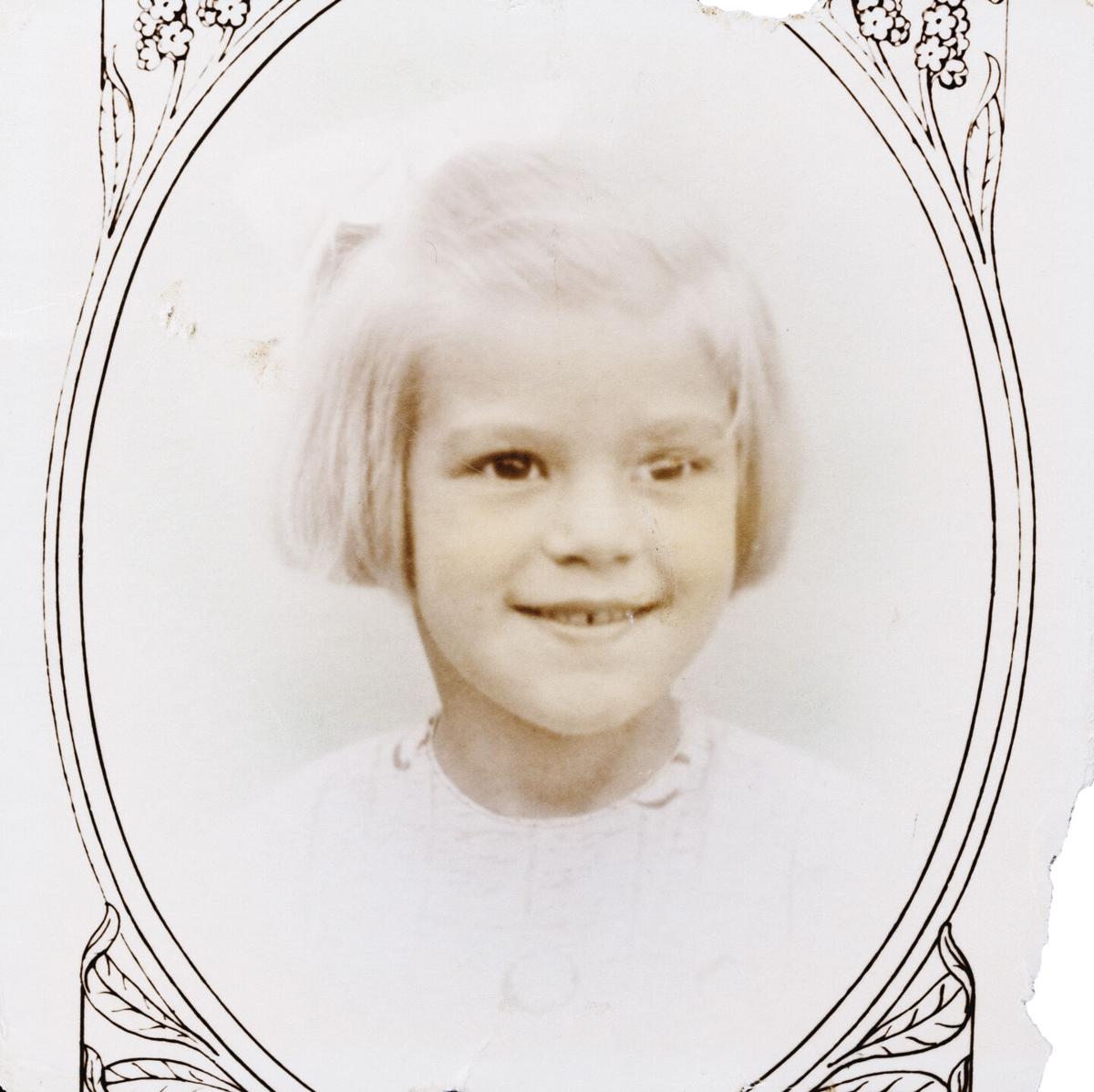 Nancy Burch, as a schoolgirl in England. 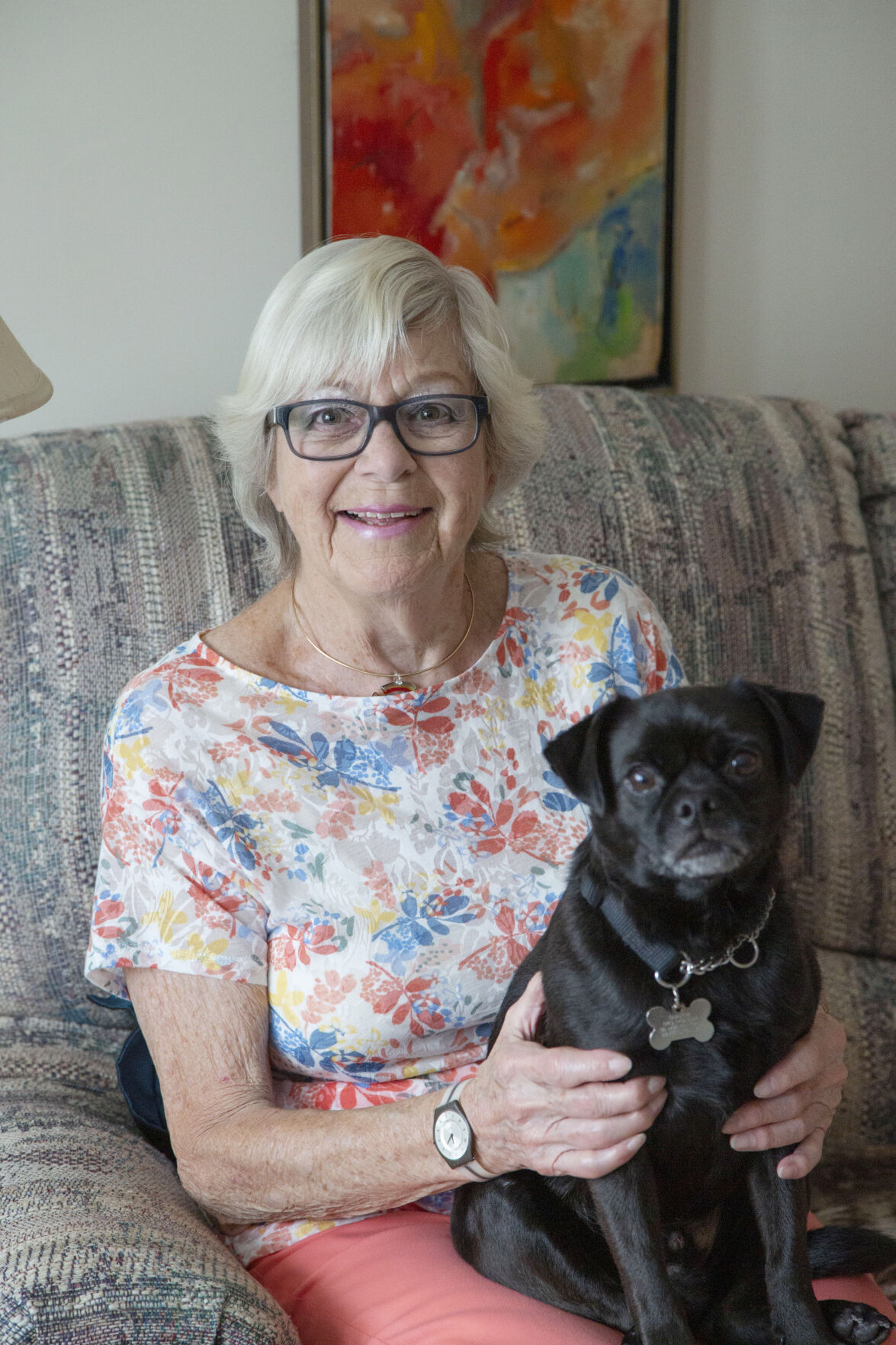 Nancy Burch at her home in Warrenton, with her best friend.

Recently I was invited to reflect on some of my World War II experiences in London, because it was thought that those experiences might be helpful for us during this present COVID-19 crisis. We Brits are known for our "stiff upper lip" and our incredible ability to cope calmly even when our backs are against the wall.

Just a little of my background -- I was in my seventh year when war was declared in 1939 and our family lived about  17 miles from the center of London, in  the county of Kent, one of the hardest hit regions by the blitz and buzz-bombs [V-1 rockets). Biggin Hill, home of the Royal Air Force Spitfires flown in the Battle of Britain, was just about 10 miles from our home -- so we were in the thick of it.

Schooling was constantly interrupted during the daylight bombing, and when the siren sounded, we would walk, in an orderly fashion, to the above-ground air raid shelter, made of reinforced concrete, to continue our lessons. Sometimes there was no electricity, and those shelters were scary places!

My sister and I were not evacuated until the end of August 1944, shortly after Hitler unleashed his V-2 rockets, at which time our parents decided we should go, with our maternal grandparents, to stay with our great aunts in Scotland. We returned from Scotland the following April, having completed a full term of education in Scotland.

Many of you will be totally unaware of the fact that food and other rationing in the UK did not officially end until 1952 -- in other words, we were subject to rationing for 13 years -- those were my real formative years. It was a learning experience which has stood me in good stead throughout my life. I think I learned how to economize and make do. Another of the WWII slogans was "Make do -- and mend," which is exactly what we did -- we mended our clothes and shoes, we repaired all sorts of household items -- it was definitely not a "throw away" society.

Sometimes we went barefoot, but there did come a time when we were introduced to Lancashire clogs -- thick, wooden-soled shoes; something like a metal horseshoe was attached to the soles. They were traditionally worn by factory workers in the north of England. They never wore out!

Food was severely rationed -- we had about 8 ounces of meat per week, for four people. We had a slightly smaller ration amount of butter, margarine and cheese. Eggs, milk, fish and all other grocery items, as well as vegetables and fruit were also severely rationed, or non-existent. Not one scrap of butter or margarine was left on the paper wrappers -- which were assiduously scraped to be sure every piece was garnered. (To this day, I still scrape my butter paper wrappings!)

Drippings from the small piece of meat, which was generally roasted on Sunday, were carefully collected because, when cooled, they could be spread on bread to make "bread and dripping sandwiches" later in the week. Our meat was supplemented by "offal" -- that is, sheep, pig or beef hearts, kidneys, liver and other internal organs. Tripe -- the lining of an animal's stomach -- when cooked with onions, was a great favorite with many people -- but not me!

The Ministry of Food also tried to get us to eat "whale meat steaks" but they didn't have much success with that scheme. The meat was much too oily and definitely an acquired taste -- unless you're an Eskimo!

We also ate rabbit -- but when buying rabbit, you had to be sure that it still had its head on; otherwise you might be purchasing a cat. Stripped of their fur, cats and rabbits are not unalike, and black marketeers were up to all sorts of tricks! Yes, as in any crisis, there was a black market, and I am sure this COVID-19 crisis will be no exception. It is important that we not feed into that market by purchasing items from unscrupulous opportunists.

Of course toiletries were almost non-existent and from time to time somebody from either the Ministry of Food or the Ministry of Health would come to the house and scrape around the drains for any pieces of fat or grease which may have accumulated -- this was then used in the production of lipstick, hand and face cream and other toiletries. It was a long time before I ever used lipstick -- and not just because my dad didn't approve! Instead of toothpaste, we used salt.

Water was another scarcity -- due to the amount of water needed to put out the fires caused by Hitler's incendiary bombs. Water was rationed and we were permitted to take one bath per week per family. We rotated how we used the bath water so that every fourth week I got the clean water! I think it may have been this experience of water rationing that led to the expression "we Brits take a bath once a week -- whether we need it or not.”

Toilet paper -- what's that? During WWII, all paper was extremely scarce, sometimes non-existent, so we used whatever was available -- generally newspaper!

Of course, it didn't get flushed down the toilet -- it was deposited in the dustbin (garbage bin).

I was born and raised in a pub. During the war my dad, a cabinet maker and draughtsman by profession, was employed as a draughtsman [British spelling of draftsman], working on sensitive documents to assist the war effort, by Vickers-Armstrong (the biggest aircraft developer and munitions company in the UK at that time).

However, he still worked in the pub in the evenings and on weekends. Obviously we had to provide paper for the toilet facilities so dad used to take the large phone books, and on his electric bench saw cut them into four, drilled a hole at one corner of each of the four pieces, and threaded a string through so that the bundle could be hung on the toilet roll holder. These became the non-flushable toilet rolls of the day. "Necessity is the mother of invention!"

My sister and I recently commented that we are so glad we had the hardships of WWII because we are able to cope with the present situation relatively calmly.

We didn't starve during the war, although sometimes we felt hungry -- I had to be given an additional ration of milk at school because I was so skinny. At the end of the war, some of our customers said, "she looks like something out of Belsen," (an area of Auschwitz), but I was healthy and that was the main thing.

It really wasn't all doom and gloom! There was a great sense of community. I suppose in some small way our pub, named "The Volunteer," which (like "The Windmill" theater in London), never ever closed during the six years of the war, provided a gathering place for the local community and off-duty military personnel.

My sister and I used to make models of the V-1 rockets (doodle-bugs as we called them) and these were on display in the bar. I recall on one occasion an American GI asked if he could buy one of them, but we just gave it to him. To this day, I wonder what ever happened to him and the model doodle-bug!

Immediately following an air raid and after the "all clear" was sounded, the local community rallied around to assist with clearing away the bomb-damaged homes and with other rescue operations. It was just what people did. I don't think we ever thought about it -- there was a need and we all pitched in.

In this present crisis, if we fear running out of food, we could make our supplies go further by reducing the amount we consume. For instance, I usually have 1 cup of cereal and a banana for breakfast; right now I'm using 2/3 of a cup and a banana and a little less milk. I normally use two slices of bread for a sandwich; now I'm using only one slice, I know I won't starve and, for those of us who struggle to control our weight, there could be a definite benefit!

There was another popular slogan, the first part of which could be helpful as we cope with the present crisis -- "Coughs and sneezes spread diseases -- trap the germs in your handkerchief." Invariably some wit always changed the posters by adding two letters (A and N) and deleting the last three words. Something for you to puzzle out.

I don't know whether these thoughts will be helpful to you, although I think the bottom line is to be mindful of others, don't become hoarders, stay at home, and remember that this, too, will pass.

So - KEEP CALM AND CARRY ON!