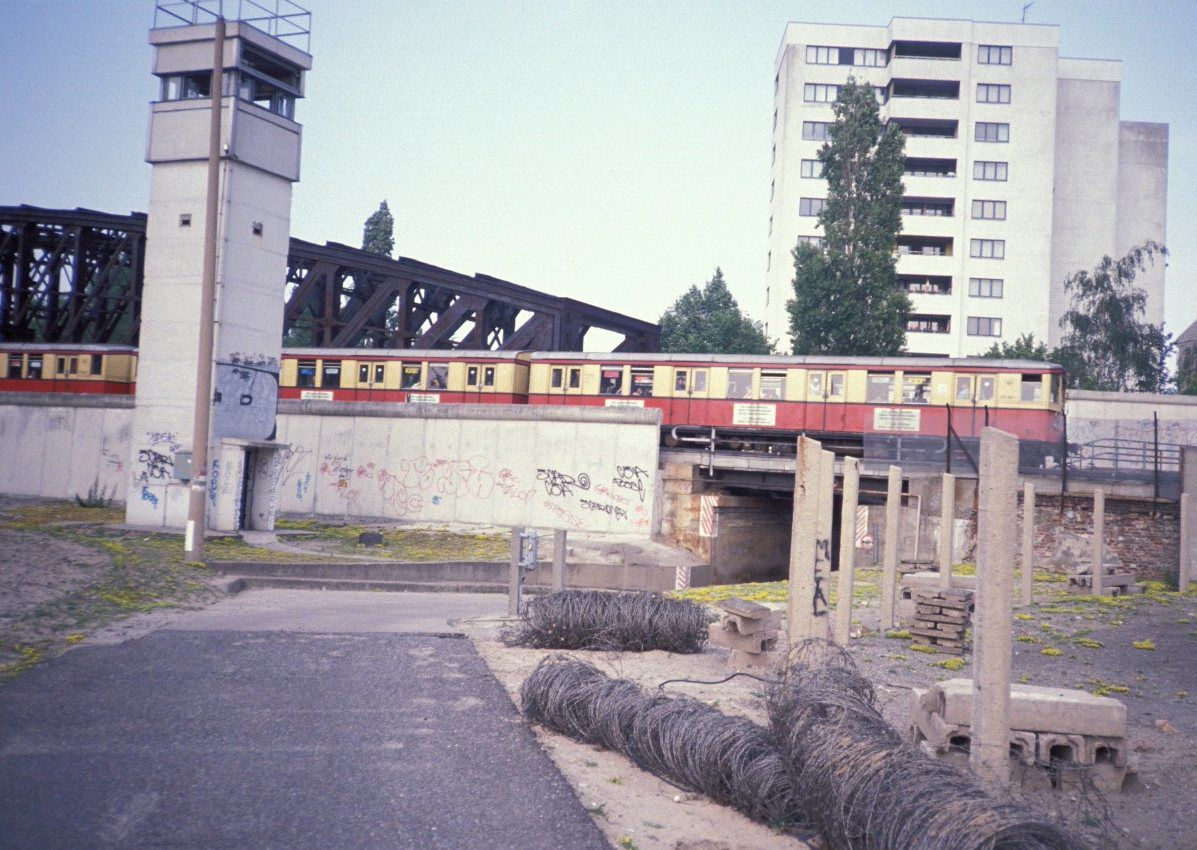 View of the train and wall from our window. 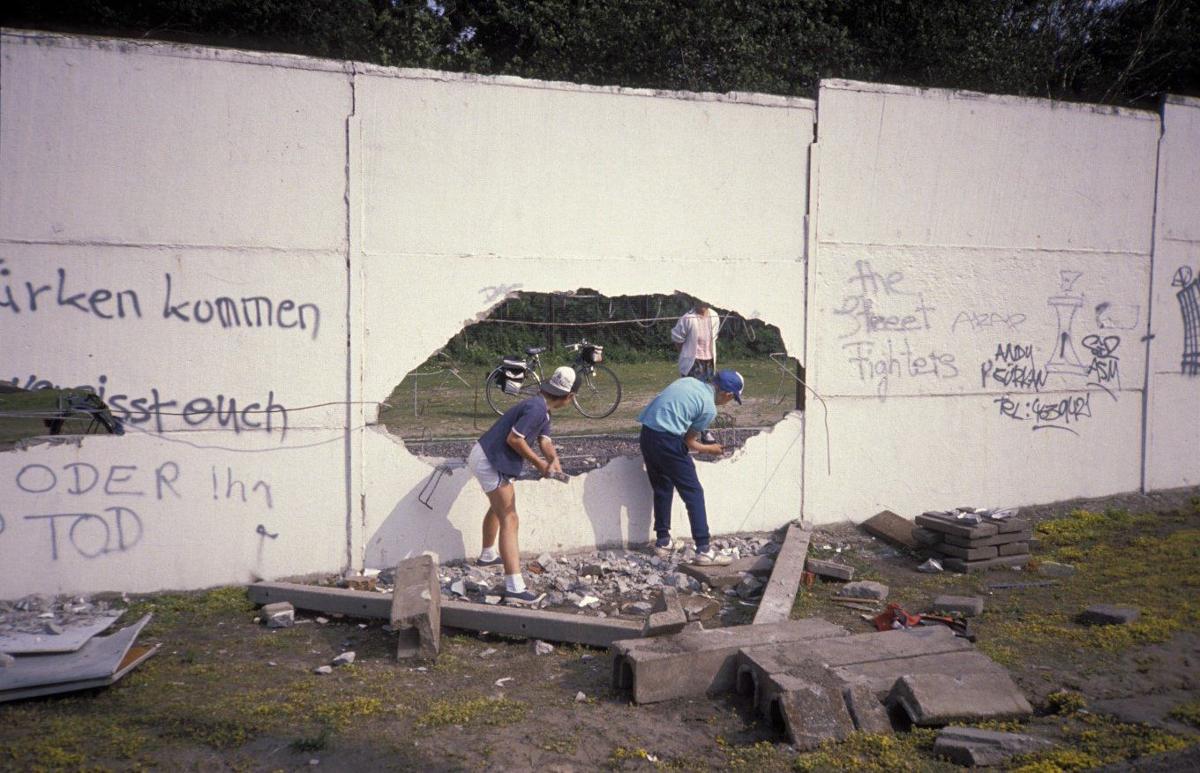 Chipping away at a decades old barrier that once separated Berlin. 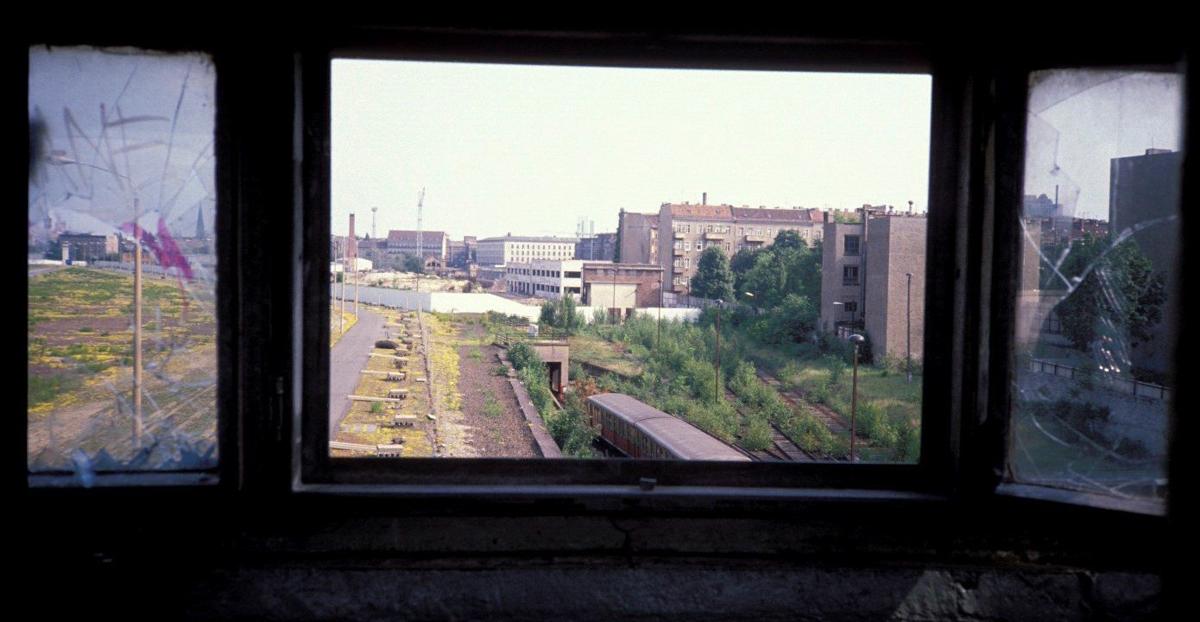 Another view of the Berlin Wall from our home.

View of the train and wall from our window.

Chipping away at a decades old barrier that once separated Berlin.

Another view of the Berlin Wall from our home.

My wife and I had been celebrating my sister’s birthday at her flat on the other end of West Berlin. Just as we got home, we got a phone message from my mother-in-law in Warrenton, saying something like “Check out CNN! The wall is coming down!”

My first thought was, “Those crazy Americans. They’ll believe anything.” But then we switched on the television and could hardly believe the news. Something was happening at the wall! So, we threw on our winter jackets, ran down the stairs and walked as fast as we could around the corner of the wall to the closest border crossing at Chausseestrasse. We found a crowd and complete chaos! There were people everywhere, going every which way, back and forth across the checkpoint, with East-German guards standing helplessly around with dropped jaws.

Chaos compounded by conflicting news reports combusted across the wall. Why? How? There were lots of rumors, but no one really knew what was going on. It just happened.

It was later dubbed the peaceful revolution. An accident? Answer to thousands of prayers? Perhaps both. According to later reports, an important East-German leader botched a question in a press conference about a possible change in the rules for visiting the West. It sounded something like a passport visa might no longer be necessary. Huh? The news spread like fire. Thousands of East Berliners voted with their feet while Communist party bigwigs stalled. No clear directives were given. No soldiers or tanks appeared on the scene. No shots were fired. No damming of the flood of people. No return to status quo.

After more than 20 years of enforced separation, East and West Germans celebrated in the streets. They partied at the checkpoints, next to the wall, on top of the wall, in the markets, parks, bars, and restaurants, with friends and relatives. Newscasts looped footage of out-of-control crowds whooping it up at the iconic Brandenburg Gate. Berlin was drunk with joy. Chants of “we are one people!” filled the air. After checking out the scene at Potsdamer Platz, one of my East Berliner cousins and her boyfriend rang our doorbell. While celebrating over a spontaneous dinner, we listened and absorbed stories. They were so excited to be in West Berlin for the first time!

I was awakened early by the doorbell. The brother of my sort-of-cousin and computer pen pal was at the door. When the news about the wall exploded in Dresden, he tested the rumors by squeezing himself through a window into one of the overcrowded trains going north to Berlin. He arrived very early Saturday morning, and decided to visit us on the way to his aunt’s flat in West Berlin. Little did we know then that this young man would become one of our closest family friends!

During the following weeks, we had several visitors from East Germany. A Leipziger friend brought a pile of recent newspapers. He showed us pictures, shared some of the best articles, told stories, and tried to explain happenings there from his viewpoint as one student among tens of thousands who took part in the candlelit Monday-Marches. These peaceful Volk-marches went all the way back to 1982, from small beginnings in the sanctum of the Nicolaikirche, to thousands and thousands chanting, “we are one people.” Years of political change and growing unrest gradually chipped away at the base of the wall until it fell.

The fall of the wall was good for business. East Germans were eager to spend their “visiting” stipend on oranges, bananas and all kinds of exotic wares that were scarce in the DDR. Vendors on both sides of the wall set up street booths, especially near the Brandenburg Gate. They hawked East memorabilia and souvenirs.

The most popular tourist items were Russian hats, military gear, pins, and later, bits of wall rubble. People began busily chipping away at the wall with hammers and chisels. Worse than woodpeckers. I, too, chiseled a few pieces from the wall closest to our flat. In later years, like pieces of the “true cross” sold and treasured all around Europe during the Middle Ages, the pile of painted concrete pieces that have since been sold as echte Mauerstücke (real pieces of the wall) could encircle Berlin several times.

By the end of March 1990, it was clear that Germany was on the road to rebirth. No going back. In what were to be the last elections in communist East Germany, the East Germans voted overwhelmingly for the parties in favor of reunification.

One summer day after workers had begun tearing down parts of the wall closest to our home, I spent a day photographing the crumbling wall zone. Some wall segments still stood there like jagged teeth, pock-marked by chisels and hammers. I walked through and around the corner, training my lens on small details, such as the view through newly graffitied scrawls on the shattered glass of one of the remaining guard towers. I caught the dusty red and gold city train curving north up the tracks from the tunnel, the abandoned jeep path, piles of coiled barbed-wire, encroaching weeds, and a carpet of golden flowers. Familiar buildings and trees were framed by the foreign perspective from inside the wall.

The months of working through countless legal, political, and economic issues in the way of becoming a united Germany were finally over. The last documents were signed ceremoniously by heads of state representing the Federal Republic of Germany, the German Democratic Republic, the United States, the United Kingdom, France, and the Soviet Union. The third of October, the day reunited Germany was born, is now the national holiday, equivalent to our Fourth of July.

Thirty years after the so-called Fall of the Wall. Thirty years since the Peaceful Revolution.

What does it mean to me? I was born in the West-Sector of a divided Berlin. Our oldest daughter was born one month after reunification into a united Federal Republic of Germany. That is something that I could never have dreamed of during my childhood in Berlin.