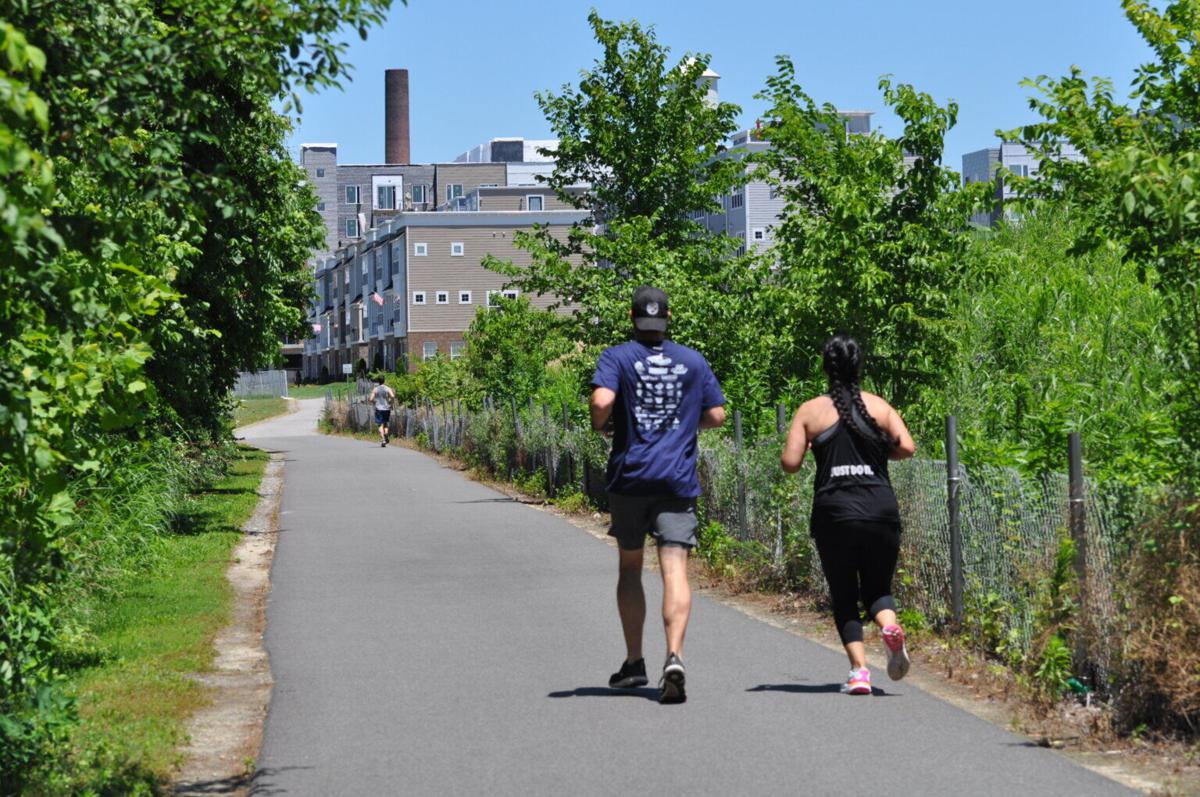 Runners on the Capital Train in Richmond 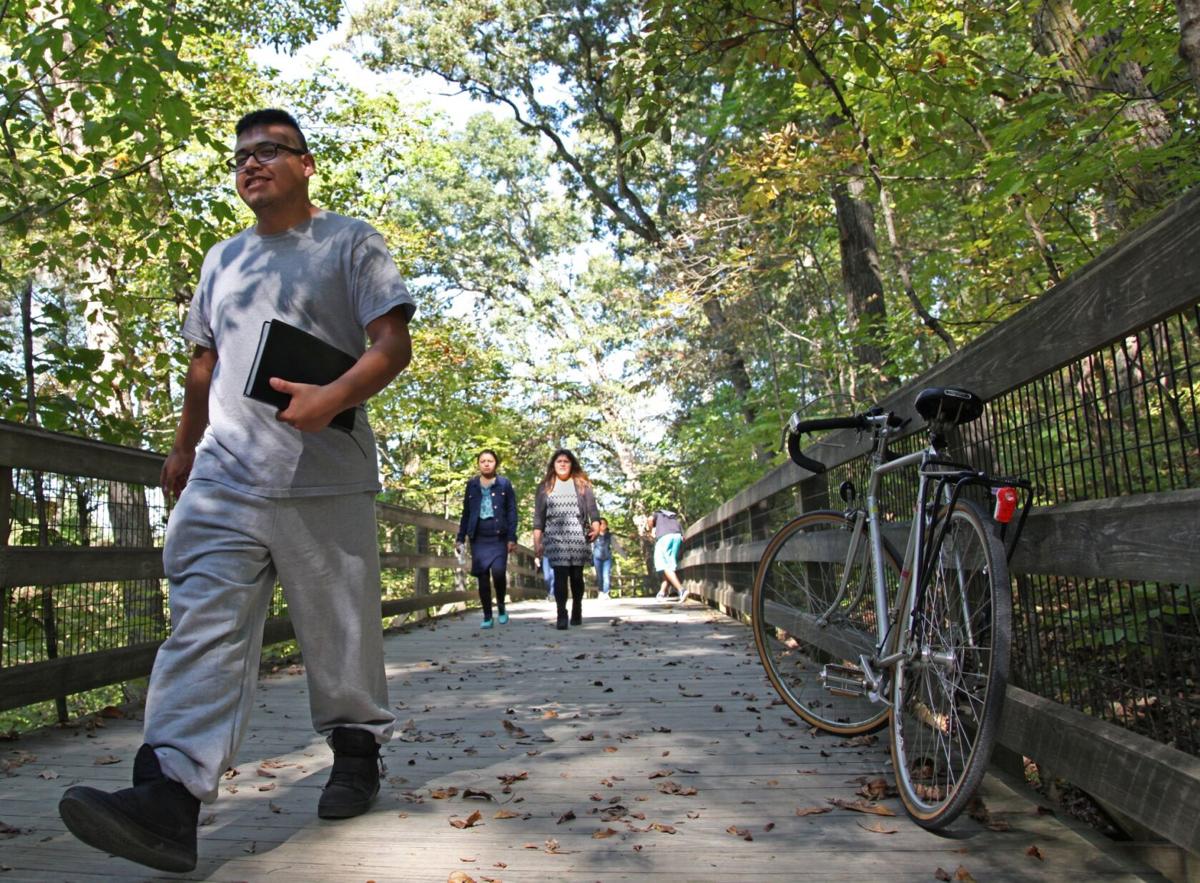 The Saunders-Monticello Boardwalk Trail near Charlottesville.

However, the $10 million for regional trails included in the most recent state budget sets a new precedent for trails funding.

Although news of the money was welcomed with open arms by advocates, will it be a one-time budget blessing or the first taste of a new golden age for trails in the commonwealth?

“We have supported trails in the past through various programs, but this is the first time we have put money directly toward recreational opportunities,” said Sen. Emmett Hanger, R-Augusta. “Gov. Northam was kind enough to put $5 million into the budget for outdoor trails. At one point we had even squirreled away $50 million dollars for trails, but it wasn’t realistic for us to keep that in there as we went through conference with all of the needs out there. This budget amendment left the Senate with $40 million and ended up passing both chambers with $10 million for trails.”

Besides the rollercoaster ride of dollar amounts allocated to trails, throughout negotiations lawmakers also toyed with tying the money to specific projects. The mooted Shenandoah Valley Rail Trail in Hanger’s district was one of a half dozen trail projects that moved on and off the list as the budget amendment bounced between chambers. Ultimately the final version of the allotment leaves the decision of which trails to fund to the Commonwealth Transportation Board.

The only direction the amendment gives the CTB is “to support the planning, development and construction of multi-use trails with priority given by the board to developing new regional trails, to projects to improve connectivity of existing trail networks, and to geographic diversity in the use of such funds.”

An Office of Trails?

That lack of specificity has left conservation advocates and trails groups wondering whether VDOT or the Department of Conservation and Recreation will take the lead on implementation. Historically, depending on whether trails projects are classified as linear parks or active transportation connections, they can either be funded through DCR’s Recreational Trails Program or VDOT’s Transportation Alternatives grants.

“There is some confusion as to whether trails are recreation or transportation, but in my opinion they’re both,” said Cat Anthony — executive director of the Virginia Capital Trail Foundation and president of the Virginia Trails Alliance. “VDOT and DCR are wonderful, but there does need to be a statewide office of trails to manage a recurring fund of money that can be divvied out to trails building and management groups.”

Anthony’s desire for one office to coordinate Virginia’s trail expansion derives from the successful model of Florida’s Office of Greenways and Trails. Last year Northam appointed Cassidy Rasnick to manage the commonwealth’s new Office of Outdoor Recreation. However, since she was already serving as deputy secretary of commerce and trade, the change represented more of an additional responsibility on existing staff rather than additional manpower.

“With COVID-19 going on I don’t think that particular office has gotten traction yet,” Hanger said. “As a state, we probably should have better coordination for this specific type of endeavor. I would think there could be someone dedicated to trails on the governor’s staff. So far a lot of the advocacy has come from people in the private sector like conservation groups.”

One such trail initiative that could benefit from greater state guidance is the Birthplace of America Trail (BOAT) in Hampton Roads. The proposed 93.2-mile long trail would feature one spur that would connect the Virginia Capital Trail to the City of Hampton’s Fort Monroe via the Upper Peninsula as well as a southerly route to link Surry with the South Hampton Roads Trail. VDOT commissioned a study for the BOAT in 2015, and the completed plan was finalized in 2017, but much work remains before the trail becomes a reality.

“We have a lot of momentum now, but we’re at the point where we need continuous professional assistance to make sure this project can be completed,” said Tom Howard — chairman of the Tidewater Trails Alliance. “We are the advocacy wing of this effort, but we have to have people in play who will consistently keep this project moving forward at the administrative level.”

That’s where advocates see a potential future for a state-level trails office. “We have commissioned a study group, submitted a grant and we’re waiting on funding to finalize the alignment,” Howard said. “We are at the point where we need to secure easements, but we are a fully volunteer nonprofit organization at the Tidewater Trails Alliance.”

Currently the Hampton Roads Transportation Planning Organization is the official government partner for the effort. Once planning is completed HRTPO will pass the project off to the Hampton Roads Transportation Accountability Commission to organize the trail’s construction. HRTAC will then act as the liaison between VDOT and local planning groups as the trail is built out. Reflecting on the trapeze act currently required of local groups to get a trail completed, “Could things be better?” said Howard, “Always.”

Although the existing process can prove taxing on volunteer groups, the dream of a separated walking and biking path connecting the Seven Cities with the Capital Trail is worth the effort according to Howard. “Cycling has taken off during this pandemic, and habits are being formed. It’s incumbent upon us to get this infrastructure in place so that 20 years from now we can compete with the Portlands, the Raleighs and the Northern Virginias on active transportation, which is a real amenity that can draw people to our region.”

However, building out the BOAT — let alone Virginia’s other trails awaiting assistance — will require more than a one-off budget amendment. “I’ve not seen trail funding like this before, so it’s exciting to get $10 million,” said Anthony, of the Virginia Capital Trail Foundation. “The pandemic has shown we all need access to green space and trails for our health and to de-stress, so my hope is this is not just a one-time thing, and we can make sure there continues to be adequate funding for trails in the future.”

Could such a proposal for recurring trails funding receive the blessing of the General Assembly? “Yes, but we’re going to have to make sure our advocacy groups are out there in full-throated support,” said Hanger. “Trails benefit the rich, the poor and the in between. We all need to recreate in the outdoors and enjoy nature. It’s important for us to get families outside and building out trails and state parks is a good way to do that.”