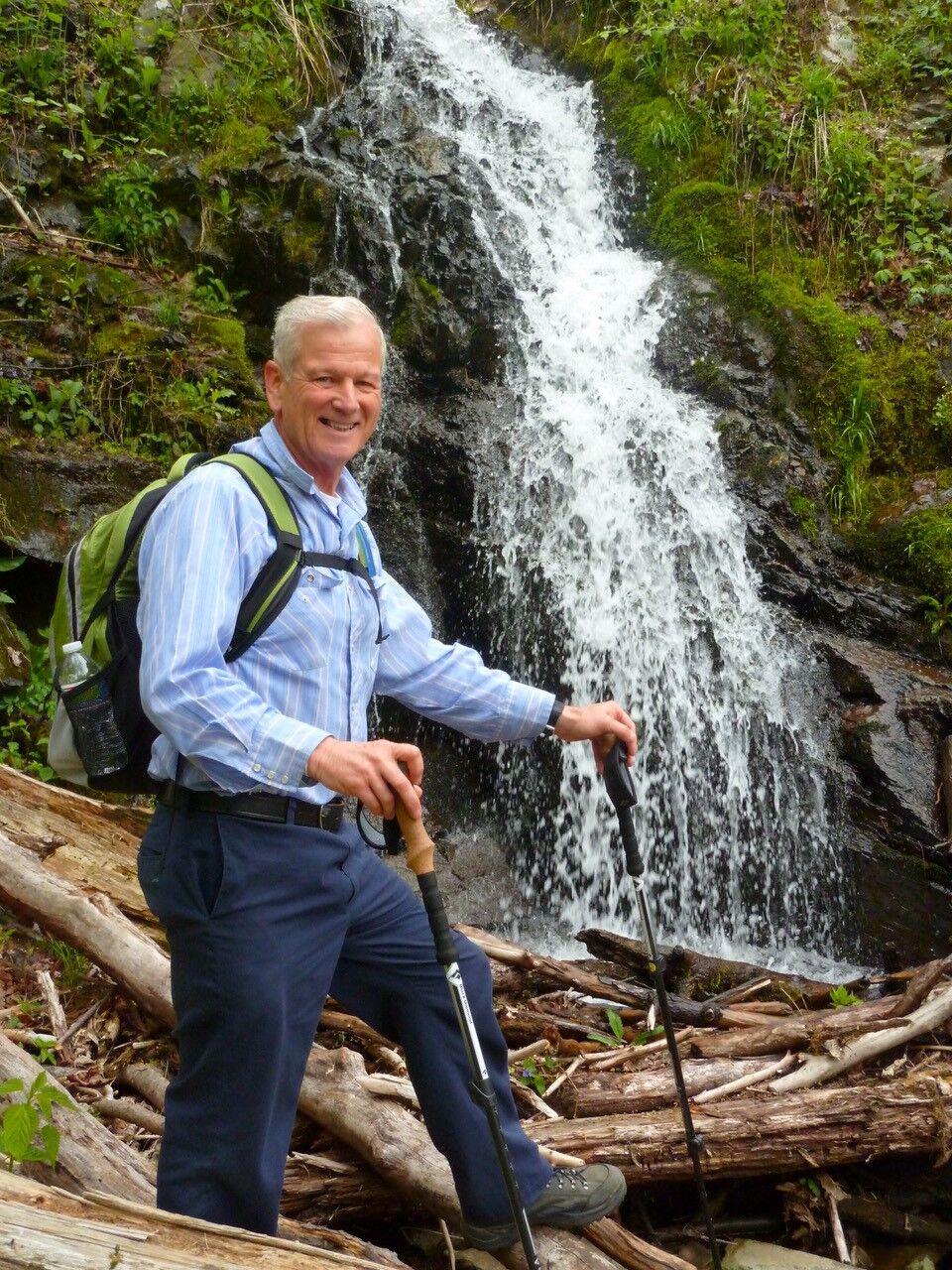 George Wotton, on one of his many hikes with friends. 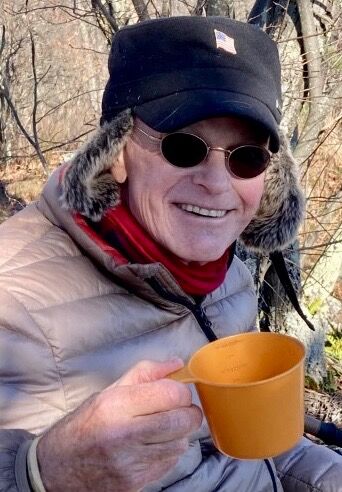 Six years ago George Wotton died while hiking his beloved mountains. On Dec. 31, 2014, he set out for a hike on a cold and cloudy New Year’s Eve morning. I, Andreas Keller and Ken Hawker accompanied him.

The hike was an ad hoc jaunt arranged just a few days prior. The thermometer was locked at 17 degrees when our quartet began its walk up Buck Hollow Trail in the Shenandoah National Park. Mary’s Rock and return was the itinerary, an 8-mile loop all of us had done before.

One of the last members to sign up for the hike was George. He had recently returned from a ski trip where he accompanied his grandkids and a local Boy Scout troop for three days of down hilling. We were glad when he joined the excursion.

At age 69, it was to be his last walk in the mountains.

Each Dec. 31 since his passing, fellow hikers have commemorated George’s life by returning to the trail where he breathed his last. It’s a testament to his love of people and his desire to hike with folks who shared his passion for the out-of-doors.

But George’s life ran much deeper than just a walk in the woods. With hiking poles in hand, a day pack on his back, and eyes focused on the trail, his hiking style was emblematic of his life view. Grab hold and move out. Smiling all the way.

In the year he died, he had hiked Old Rag Mountain 24 times, a demanding 8-miler and the most popular hike in the Mid-Atlantic region. He logged many additional miles on other trails all well.

An enduring memory of those who knew George was his ever-ready smile. It began in his eyes and broadened deeply into his signature smile. “Good to see you.” “Beautiful day for a hike.” “Let’s get started!”

He took an interest in everyone he talked to. Life was not about him. It was about you. It was his inborn view and contagious. When George was on a hike, you were going to have fun. He often moved forward and backward along the trail carrying on conversations with the other hikers.

And, he had a ubiquitous bag of small Snickers bars at the ready to share with anyone needing a quick energy boost.

Not until the eulogy delivered by his son, Tom Wotton, did most of his friends become aware of his career accomplishments. He never spoke of them on the trail.

George was a retired U.S. Army major. He served his country in the U.S. Air Force for four years, earned his bachelor's degree from Lake Superior State University, and then served another 18 years in the U.S. Army as an electronics engineer.

His son, Tom Wotton, recalled, “One testament to my father’s humble character is he never put his awards or promotions on display. After he passed, I was helping my mother sort through his office. I remember one letter he originally was presented, but we could not find it. It turned out he had placed a photo of his grandson over top of the commendation.”

It was a congratulatory letter on official White House stationery signed by President Ronald Reagan.

George retired as a major in 1990 after serving in locations worldwide. He was awarded the Legion of Merit, a prestigious military honor bestowed upon only a few by the United States Armed Forces. It was given for his exceptional meritorious job performance.

After retiring from the Army, he worked as a master electrician in the family business, Home Sweet Home Improvements, located in Opal.

George loved skiing, hiking and backpacking. He was a great mentor and supporter of the Boy Scouts and assisted with many different troops over the years. His memory as a devoted husband to his wife Diane, and a dedicated father and grandfather to his sons Tom and Ken, their wives, and four children lives strong today.

As the four mountain-loving men began their ascent to Mary’s Rock, George was pleased with his new winter hiking mittens; gear that was weather appropriate for the frigid morning.

I remember hanging back as the hike began, last in the four-man line but always within earshot of the trail chatter. As always, George was ebullient and energized as he climbed the steepest sections to our first stop, Skyline Drive.

We took a break at the Meadow Spring parking lot. As soon as George’s pack was off his back, he was offering Snickers bars to all.

Given the cold, our break was short, and we moved rapidly across Skyline Drive to ascend a steep section of the Meadow Spring Trail. Within 200 yards, our pace slowed noticeably as we shifted to low gear.

At this point, I was hiking directly behind George and carrying on a conversation with him. The trail took a sharp turn right and ascended very steeply. George grew quiet. Not surprising, given how physically demanding the trail was.

Then, in a blink, he turned around and gazed directly at me, clutched his chest, moaned softly, and slowly slumped to the side of the trail. I froze and was momentarily speechless. I yelled to Andreas for help. Ken Hawker, a strong hiker, had moved out of range of our shouts and would return later when we failed to catch up with him.

Quickly we positioned George to the center of the trail. Andreas began CPR, and I grabbed a small spray bottle of nitroglycerin to treat angina pain. I had never used it before and carried it as a precaution, given the age of many of the club members. I sprayed the drug inside George’s mouth.

I rushed back to Skyline Drive and flagged down a motorist asking him to immediately go to the Thornton Gap entrance and send medical help.

Within 15 minutes, three rangers were tending to George. Twenty minutes after that, 10 first responders were on site. The lead ranger was using a defibrillator on George in numerous attempts to restore a heartbeat.

When it appeared George was no longer with us, the ranger quietly explained to me he was following protocol under a UVA doctor's cell phone direction and would end the procedure when completed.

Later, another ranger drove us back down the mountain to our vehicles. George’s body was taken to Luray since he had died on the jurisdictional side of Page County. Our somber task took us back in silence to George’s home to break the crippling news to his family.

It was a profound experience for the three of us to have a good friend taken from us without warning in the middle of a joyful event. A razor-sharp memory that will not dull with time.

On Dec. 31, a group will again assemble and hike to Mary’s Rock.

George will be with us in spirit. Smiling and chatting as always.

John Hagarty is a freelance writer and enthusiastic hiker.