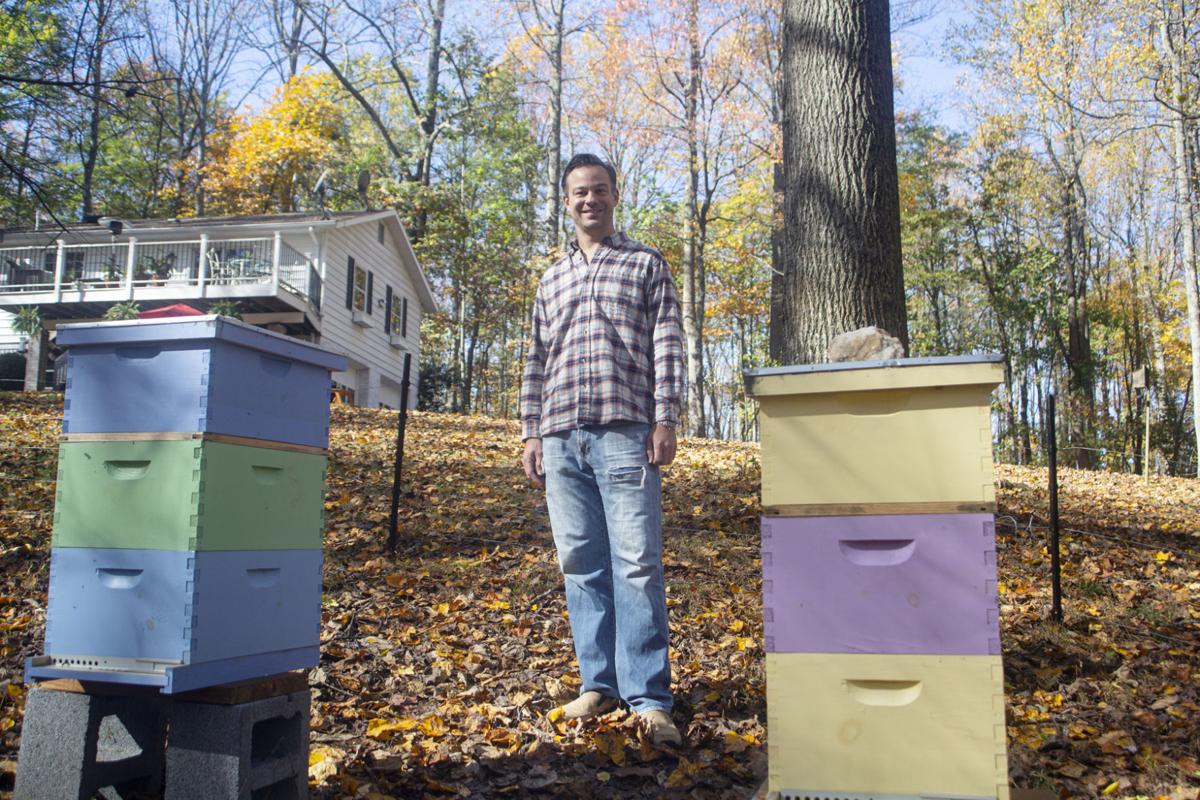 Daniel Langberg with his two hives at his Warrenton home Nov. 3, 2019. The hives were provided by Virginia's Beehive Distribution Program. 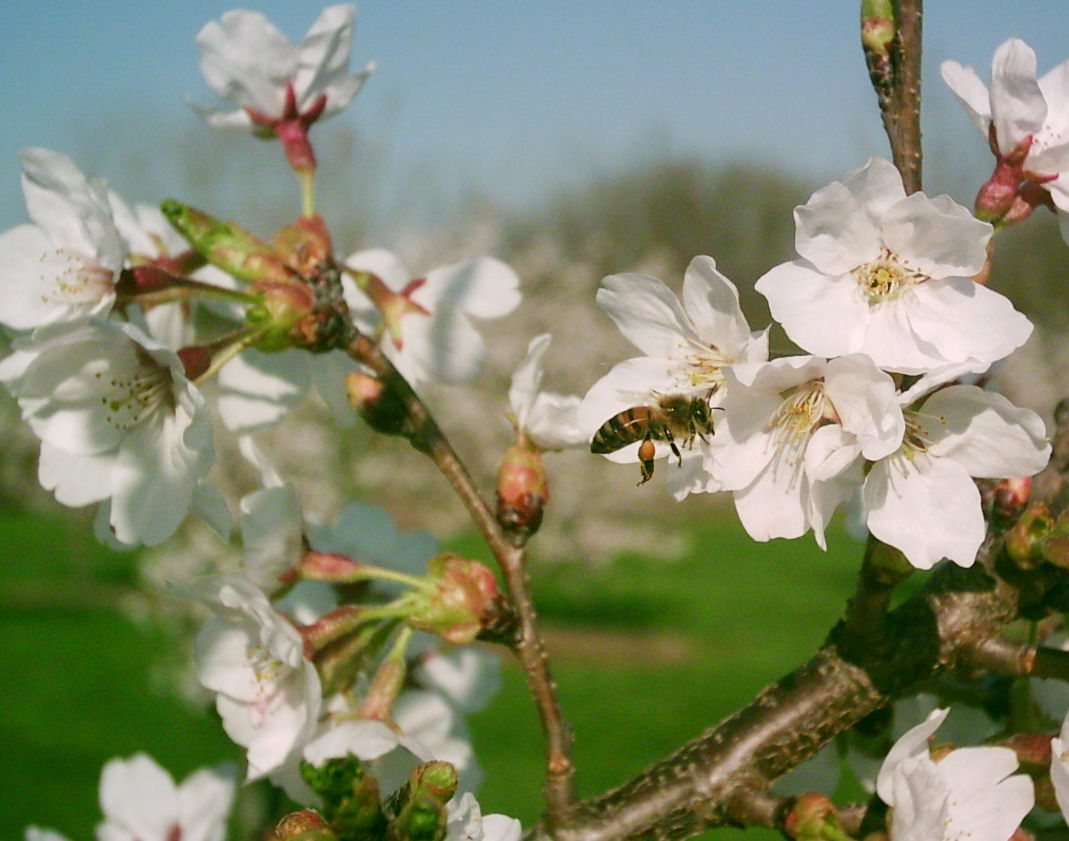 A honeybee investigates a cherry blossom.

On a chilly day last fall, Daniel Langberg leaned over three stacked wooden boxes painted in pastel colors. An identical stack of boxes sat a few feet away. His honeybees live inside those boxes, located in the towering forest behind his Warrenton home.

‘The cold is hard on them,” Langberg said at the time. Using a stethoscope, he listened in on the activity inside the boxes to see how they were faring in the cold air; to keep the bees warm, he would not open the hives until spring.

Beekeeping fits well with Langberg’s self-sufficient lifestyle, which he shares with his wife, Nancy Langberg. They keep chickens, and he hunts deer with a bow.  “It (beekeeping) was always something I wanted to do,” he said. He credited his start to Virginia’s Beehive Distribution Program. (See accompanying box.)

Those boxes in the woods represented Langberg’s first foray into beekeeping. He applied for the hives in July 2018 and, after taking a beekeeping class, eventually received his first batch of bees in the spring of 2019

Bees make honey with nectar extracted from flowers, so eating the honey is like “ingesting all the flowers in your area,” said Langberg. He hopes the honey will prevent allergies in his sons, Simon, 5, and Sami, 3.

Participants in the state distribution program range in experience. Gene Brady, who has kept bees for 36 years and taught a beginners’ class at the Warrenton Farmers Co-Op, sees experienced beekeepers as more worthy of assistance than novices, whose interest can be fleeting. “The mortality rate for first-year beekeepers has got to be 90 percent,” said Brady. “They’re throwing money down the groundhog hole.”

However, Keith Tignor, apiarist for the state of Virginia, thinks that most newcomers stick to beekeeping long term. “It’s the smallest farming plot you can have,” he said.

“This program gives you a head start,” Langberg said. A beekeeper needs a veil, gloves and a tool to move hives. Langberg also installed an electric fence around his hives to keep bears away.

Tignor also recommended getting a smoker, a small fuel can fitted with bellows that blows smoke at the bees to calm them.

“The definition of a hobbyist is to spend money,” Tignor said. The safety equipment alone costs $75 to $200.

Before applying to receive his bees, Langberg had to persuade his wife that they would not sting their sons’ bare feet while playing in the yard. It turns out there was no need to worry; the family rarely sees the bees.

“When we do, they’re a treat,” Langberg said. One day last summer the honeybees rose vertically from the hives like miniature helicopters. They soared above the tulip poplars, which can grow to nearly 200 feet. “One time the sun was shining through the trees and we could follow them,” said Langberg.

To get a running start before his bees arrived, Langberg joined the Prince William Regional Beekeepers Association and attended their Bee School for eight weeks early in 2019.

The association assigns a mentor to each student. Having a voice of experience in the area reassured Langberg. “It’s nice to have someone to call on,” he said. However, he emphasized that there are no right or wrong answers. “If you have three beekeepers in a room, you’ll get four opinions.”

When Langberg’s hive components arrived in February, he painted the hives different colors to help his bees know which was home. (Bees see a narrower range of color than humans but can easily distinguish lighter from darker tones.) He positioned the hives to face southeast, so that early morning sun would shine on the bees and encourage them to go find nectar. It’s like a push to get them out of bed and moving.

A beekeeper can acquire honeybees in one of two ways: in packages or nuclei. A package contains bees that have no relationship to each other. A nucleus, which is the option that Langberg chose, at $185, is a small colony of bees selected from a larger colony. These bees are already bonded to each other.

Three types of honeybees inhabit a hive: the queen, drones and workers. The queen’s role is to lay eggs to grow the hive. Drones mate with the queen. “That’s their only job,” Langberg said. “Otherwise they lay around and do nothing.”

Workers locate sources of nectar and bring it back to feed the queen and drones. Their wings, which span all of about an inch, may transport them two or three miles from the hive. “It’s a huge territory,” said Langberg.

Langberg said that bees travel alone. When a worker finds a particularly promising patch of nectar, it shares the location with the other bees inside the hive by doing waggle and circle dances. In spite of the darkness inside the hive, the bees learn the route.

Taste and scent also help honeybees find the flowers. The honeybee returning from its reconnaissance mission will smell like the nectar it found. Sometimes it brings nectar to the hive for the other bees to try.

According to Tignor, bees in Virginia produce 40 to 50 pounds of honey in each hive.

Invasions of mites, viruses and small hive beetles are some of the threats honeybees in Virginia face.

“The number one killer of bees are mites,” Langberg said. His own bees have survived an infestation. When Red Varroa mites infiltrated his hive, he used formic acid to get rid of the mites without harming the bees.

Two particular species of mites, Tracheal and Varroa, originated in Asia and became a problem in North America in the 1980s and 1990s, said Tignor, elaborating that mites, a virus (the nosema virus) and cold temperatures killed more honeybees over the 2017-2018 winter than over the winters of the previous 20 years.

Cold is another threat to a hive’s survival. About a third of honeybees die from the cold over the winter, according to Tignor. During cold months the bees huddle together in the hive to keep warm. As they succumb to the low temperatures, there are fewer bees to generate heat.

Invasive beetles from South Africa are yet another threat, sometimes eating the honey the bees need to survive the winter. Langberg has noticed some beetles, but not enough to be a problem. He left all the honey in the hive that the bees produced last year to sustain them over the 2019-2010 winter.

Throughout that winter Langberg regularly put his ear to his hives. Hearing their buzzing huddled together eased his worries about their welfare. In March, however, he realized that the bees in one of the colonies had died. A lab examined a sample of the bees and reported that Varroa mites killed them, even though Langberg treated the colony for mites late in the previous summer.

“I had worked so hard to do everything by the book and it still didn’t work out,” Langberg wrote in an email.

Langberg’s other colony rode out the winter well. However, its queen disappeared.

“It was a challenging start to the spring for sure!” Langberg wrote. Introducing a new queen solved that problem. Now he has four colonies.

Langberg laid a honey super (a box holding frames) over the older hive to collect and store honey for his family. However, seasoned beekeepers have low expectations of honey production this summer. Temperatures rose quickly this spring and flowers bloomed, but heavy rainfall cooled the air.

Langberg’s bees are feeding on tulip poplar and blackberry blooms. He and his family planted a field of white clover, monarda, aster and goldenrod. He allows that the 100 flowers might be a bit much, but they had fun.

“My wife might say I have become slightly obsessed,” wrote Langberg, “But I'm sure it's par for the course.”

The Virginia Department of Agriculture and Consumer Services was slated to begin accepting applications for its Beehive Distribution Program July 1; however, due to state budget uncertainties caused by the novel coronavirus pandemic, the program has been deferred to late summer.

“We received 2,000 applications in less than a day when the program opened” last year, said Keith Tignor, apiarist for the state of Virginia. VDACS shipped 985 beehive units to the applicants, who must qualify as “hobbyists.”

The 2020 application period runs for 15 days, after which VDACS will randomly pick requests for fulfillment.

Applicants receive as many as three hives. The application is straightforward, said Daniel Langberg.

More information about beekeeping classes can be found here.