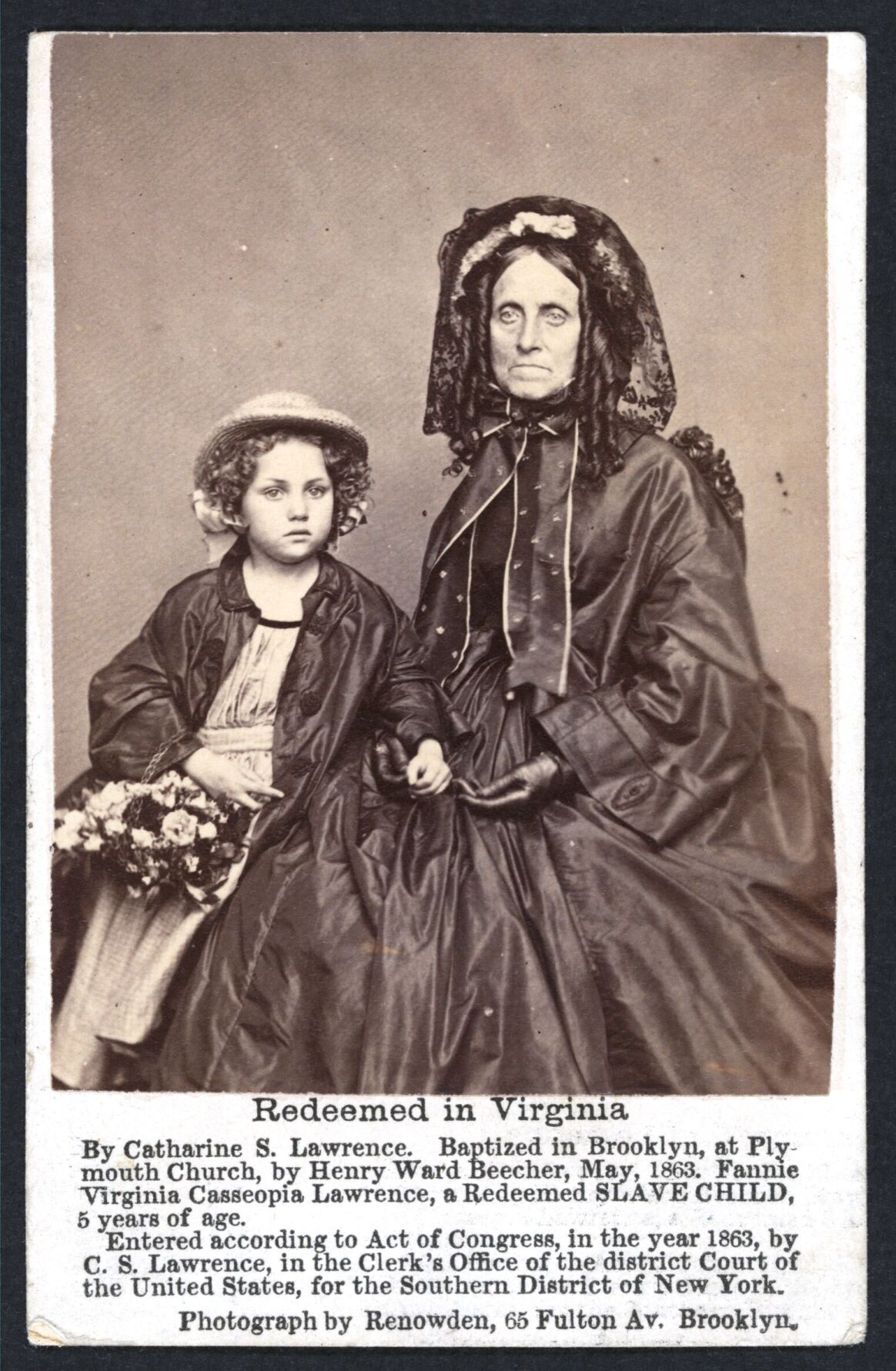 Fannie Lawrence with the nurse who adopted her, Catherine Lawrence. The original image file can be viewed here. 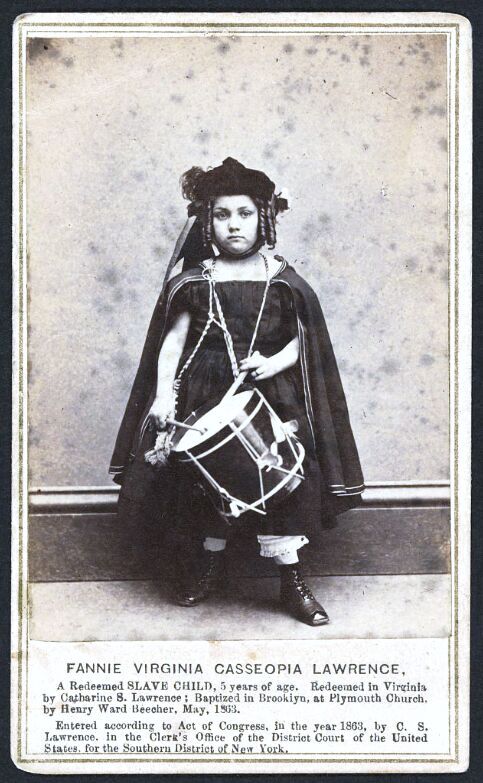 Fannie Lawrence. The caption calls her a “redeemed” slave child. The original image file can be viewed here. 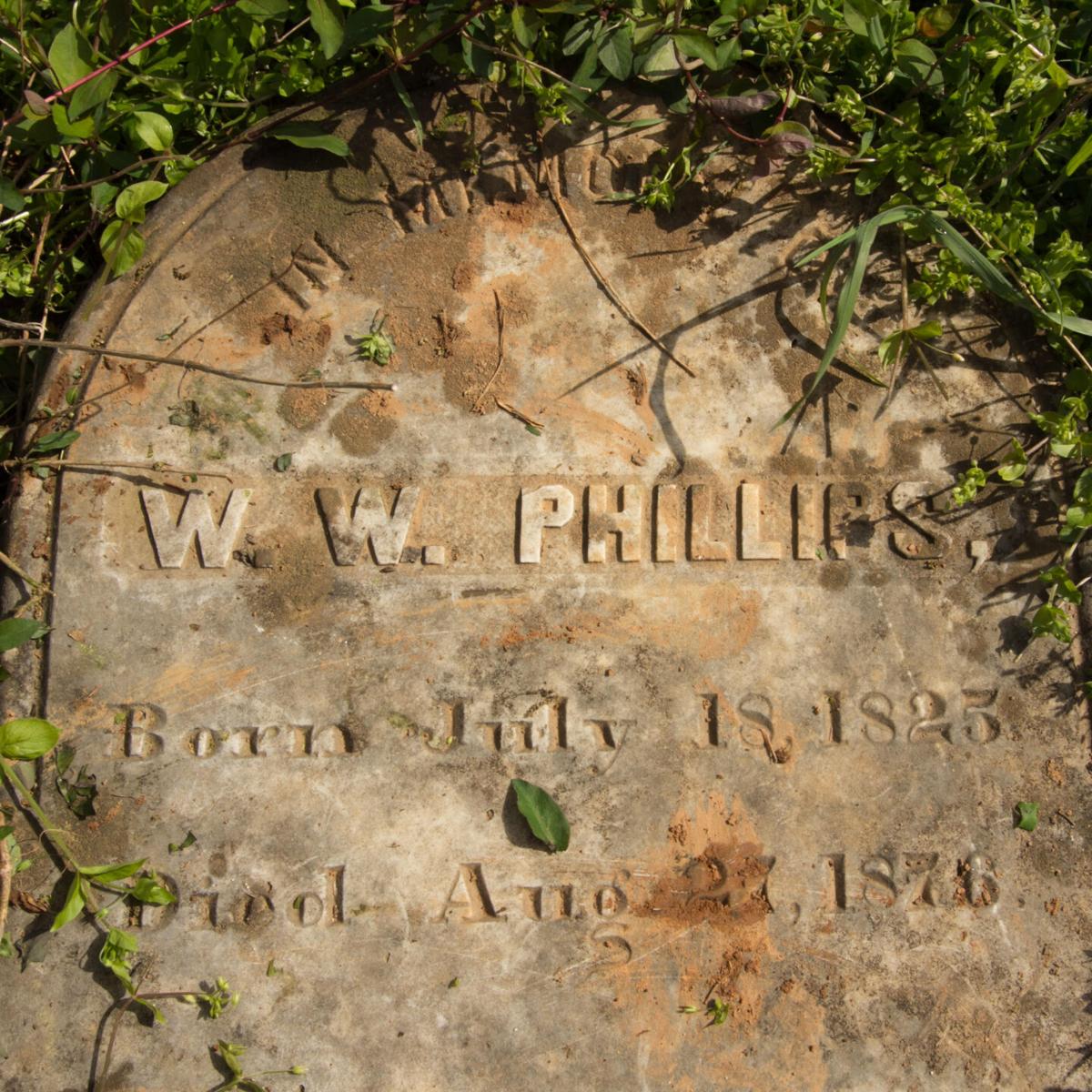 The gravestone of William Wesley Phillips, who killed Fannie Lawrence’s father. The gravestone is in a cemetery on a farm in Rectortown.

A fallen tombstone in an old cemetery on a farm outside Rectortown marks the grave of a man who killed a neighbor in 1859 and set in motion events that made a little blue-eyed, flaxen-haired enslaved girl a poster child for abolition during the Civil War.

In 1863, when Fannie Lawrence was 5, a famed abolitionist preacher in New York had her pose Shirley Temple-like in fancy dresses, then the photos were sold to raise money from sympathizers of the movement.

The Library of Congress has an online exhibit on Fannie Lawrence. And her tale is detailed in a 2015 account, “A Sad Story of Redemption,” written by Page Johnson, editor of a newsletter for Historic Fairfax City, a group dedicated to preserving local heritage.

Johnson drew largely on the 1893 autobiography of Catherine S. Lawrence, an ardent anti-slavery and temperance crusader from upstate New York who had come to Virginia to nurse Union soldiers at a tent hospital on the grounds of the Episcopal Seminary in Alexandria.

Fannie and two older sisters, Viana and Sally, were among several children of three enslaved women who had been impregnated by their owner, Charles Rufus Ayres. He was a wealthy young Virginian who studied at Yale and the University of Virginia to practice law, but instead owned a mill and farmed 500 acres outside Rectortown with at least 12 enslaved workers.

Despite his dependency on slavery, he was “a Union man,” Johnson wrote, and in his will, the 32-year-old Ayres promised the three women their freedom and money for them to move north and to pay for their children’s education when he died.

The 1857 will came into force sooner than Ayres could have imagined. A bitter quarrel with a neighbor, William Wesley Phillips, over a gate ended in an exchange of gunfire on Nov. 11, 1859. Ayres – whose shot missed – was mortally wounded by Phillips and his 18-year-old son, Samuel, who also fired. Father and son were convicted of manslaughter and sentenced to three years in the state penitentiary in Richmond, which was soon to be the capital of the Confederacy.

Ayres’ testamentary wishes did not go to plan. The women -- including Fannie’s mother, Mary Fletcher, who had still-enslaved children in the area -- at first forsook freedom and elected to remain in Virginia, living with Ayres’ kindly mother. When she died, Fannie, Viana, Sallie and many others escaped Rectortown, eluded Confederate patrols and wild hogs for more than 40 miles, and made it safely behind Union lines to Fort Williams in Alexandria near the seminary.

According to Lawrence’s autobiography, Viana, at 10 or 12 the eldest sister, pleaded for her to adopt 4-year-old Fannie. The nurse agreed to temporarily take the “beautiful child and I soon became very much attached to her.”

Lawrence wound up keeping her and taking her to New York, where she had Fannie christened at Plymouth Church in Brooklyn by the Rev. Henry Ward Beecher, brother of Harriet Beecher Stowe, author of “Uncle Tom’s Cabin.” Beecher paraded the “redeemed slave child,” as he called her, before his congregation, baptized her as Fannie Virginia Casseopia Lawrence and took up a collection reportedly of $1,200, although Lawrence said she never received any of the money. He warned that her light skin put her in danger of being abused by slavemasters or sold into prostitution.

“Look upon this child,” the preacher urged. “Tell me, have you ever seen a fairer, sweeter face? This is a sample of the slavery which absorbs into itself everything fair and attractive. The loveliness of this child would only make her so much more valuable as a chattel.”

He sent Fannie to the studio of a Brooklyn photographer to pose in formal dresses, sometimes with her adoptive mother. The daguerreotypes, photographs developed on special silvered plates, were mounted on “cartes de visite,” calling cards that were popular in that era, and sold to abolitionist sympathizers. Fannie posed at least 17 times in Brooklyn and elsewhere.

The cards “were wildly popular in the North, making Fanny the most photographed slave child in history,” Johnson wrote in “A Sad Story of Redemption.”

Lawrence took Fannie on tours to sing at churches and may have profited herself from sales of the cards.

The story has no happy ending for Fannie or her sisters. Lawrence went back to Virginia to retrieve Viana and Sallie with the idea of placing them in “good Christian families” in New York who promised to educate them. Instead, they used them as servants. Sallie died of consumption in 1867. Viana lived just four years more.

More coverage: The mystery in the graveyard

Fannie reached adulthood, but against her adoptive mother’s wishes “married one whom I opposed, knowing his reckless life rendered him wholly unfit for her,” Lawrence said. The husband abandoned Fannie with an infant daughter, leaving them to destitution. When Fannie died, her “double orphan” child was left “unprotected and unprovided for, only as far as the small savings of her mother’s hard labor will go.”

“My three Southern children are all laid away, for which I thank my heavenly Father,” Lawrence wrote in the autobiography, titled “Sketch of the Life and Labors of Miss Catherine S. Lawrence, Who in Early Life Distinguished Herself as a Bitter Opponent of Slavery and Intemperance.”

After serving his prison term, Phillips farmed his land without slaves and died in 1876 at 51. He lies near a second toppled stone marking the grave of a neighbor, William Fletcher, who died in 1856. It is not known whether Fannie’s mother, Mary Fletcher, belonged to William Fletcher.

After the deadly quarrel, Ayres, Fannie’s father, was given a large funeral and interred in a churchyard cemetery in Rectortown.

As for the “most photographed slave child,” it isn’t known how or when Fannie died or where she is buried.

Christopher Connell is a freelance writer, working with the Piedmont Journalism Foundation.

The marks of their work are left across Fauquier County, historic and critical, yet unacknowledged.