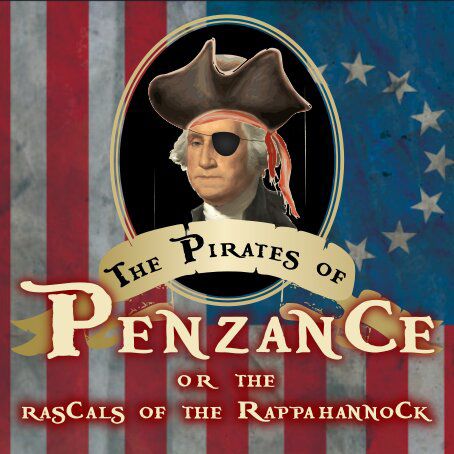 This event has passed

The Riverside Center for the Performing Arts in Fredericksburg, Virginia is proud to present Gilbert & Sullivan’s comedic operetta, The Pirates of Penzance or The Rascals of the Rappahannock, starring Claire Leyden as Mabel, Samual Keeler as Frederic, Andrew Wynn as The Major General and DC area favorites Sheri Edelen as Ruth and David Jennings as the Pirate King. Performances begin on Wednesday May 22nd and run until Sunday July 7th.

The Pirates of Penzance or The Rascals of the Rappahannock is a delightful twist on the beloved comic operetta being performed near George Washington’s boy hood home. We begin in late eighteenth century Virginia, when King George III ruled the colony. The famous soft-hearted pirates (lately of Penzance) are endeavoring to plunder with aplomb along the banks of the famous Rappahannock River. Meanwhile, the blundering Redcoats of the British army are desperately trying to keep tabs on both the pirates and the befuddled Major General George Boshington. Hilarity ensues as the young apprentice Frederick leaves the rollicking band of pirates and falls in love with Boshington’s beautiful daughter Mabel. Favorite songs including “With cat-like tread, upon our prey we steal,” “Oh, better far to live and die,” “Poor wand'ring one,” and “I am the very model of a modern Major General.”